More oversight and planning are needed to address steady increases in vessel traffic in Canada’s Arctic. Over the past decade, the number of ships using the Northwest Passage has more than doubled, posing risks to areas that are vital to marine life and northern communities. As the polar ice pack recedes, shipping routes related to international trade, mining, oil and gas exploration, tourism, and community resupply will continue to expand.

The Integrated Arctic Corridors Framework, a new policy proposal from The Pew Charitable Trusts, contains eight recommendations to address these shipping-related challenges in the Canadian Arctic, including new measures to improve safety, protect sensitive marine habitat, and ensure full Inuit participation. The framework emphasizes the need for Inuit to play a significant role in designating and managing vessel corridors and would establish special standards for ships traveling through biologically and culturally important areas, with routes classified by risk.

The report’s key recommendations include the following: 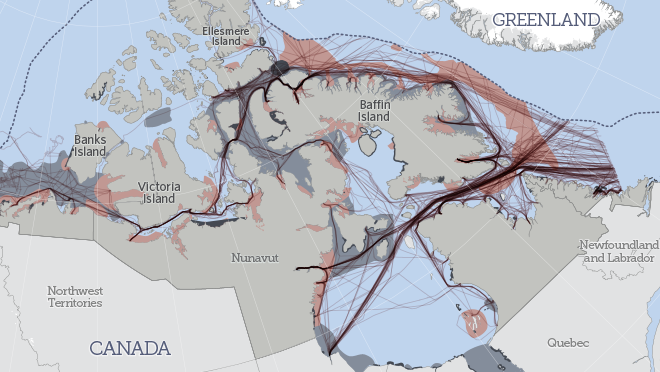 The melting of Arctic sea ice due to climate change has resulted in more ship traffic, heightening the need to develop better ways of managing vessels in this remote environment,” said Louie Porta, policy director for Oceans North Canada, a project led by Pew in partnership with Ducks Unlimited Canada. “The proposed shipping corridors would mean more efficient routes, more effective responses to large-scale emergencies, and less impact on the environment.

The proposed framework expands on the Canadian Coast Guard’s Northern Marine Transportation Corridors Initiative, and the recommendations are based on a survey of vessel traffic data, spatial analysis of high-risk shipping areas, and a review of more than 170 previous policy recommendations to the Canadian government, most of which have not been implemented.

Increased shipping will have an impact on food sources that Inuit rely on, said Mary Simon, former president of the national Inuit Tapiriit Kanatami and former Canadian circumpolar ambassador. “This report makes a concerted effort to understand and respect Inuit ownership and use of the coastal and Arctic waters. It places Inuit in the overall future planning, development, and management of the shipping corridors, and I think that’s very positive.”

The report’s proposed shipping corridors are an “adaptive governance approach that will continue to evolve in innovative and strategic ways,” said Dr. Jackie Dawson, a University of Ottawa expert in Arctic marine use and transportation.

This is an opportunity for the Canadian government to bring stakeholders together to develop a national Arctic shipping policy that would be good for the environment, industry, and Inuit, who depend on a healthy marine ecosystem.