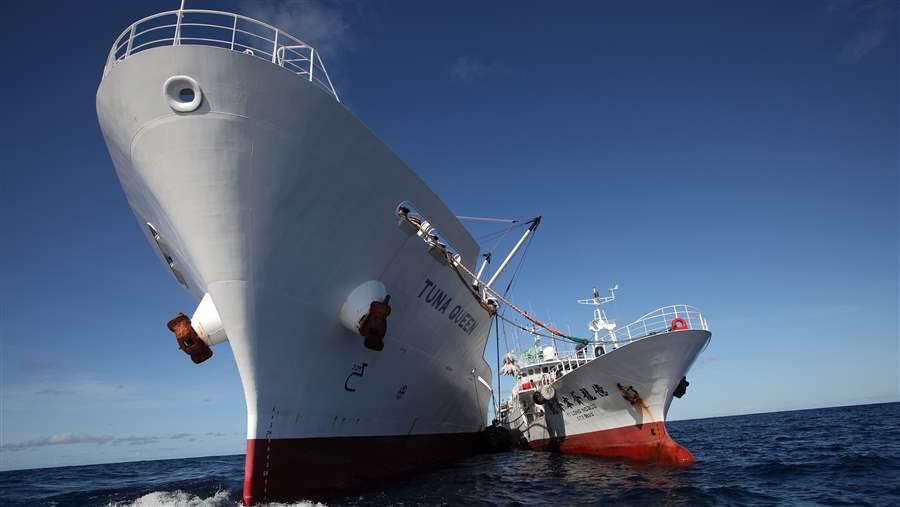 The transshipment of catch is a vital but largely hidden part of the global commercial fishing industry. Hundreds of refrigerated cargo vessels, or fish “carriers,” roam the oceans, transferring fresh catch from thousands of fishing vessels and taking it to shore for processing.

Tunas, including bluefin, bigeye, yellowfin and skipjack, make up a large portion of transshipped products, in part because fresher fish bring higher values at the market. Transshipment, however, touches a wide range of seafood products, including salmon, mackerel and crab. Although moving catch from vessel to vessel may seem harmless, a lack of effective monitoring and controls presents opportunities for bad actors to seek financial advantage by obscuring or manipulating data on their fishing practices, the species or amounts caught, and catch locations. All of these practices contribute to illegal, unreported and unregulated (IUU) fishing.

Transshipment poses a significant problem because so much of it takes place out of sight and reach of authorities. That is especially true for at-sea transshipment, which occurs far from land. Even in port, proper oversight often cannot be guaranteed because of limited inspection capacity or insufficient procedures and protocols. The financial impact of illicit transshipping is significant. In the western and central Pacific Ocean alone, experts estimate that US$142 million worth of tuna and tuna-like product are moved in illegal at-sea transshipment each year.1 To make matters worse, the lack of transparency can foster conditions conducive to other criminal activities, such as trafficking in weapons, drugs and people.2

This brief highlights the scope and scale of the problem. It includes a series of best practices and lays out a path toward reforming RFMOs’ transshipment management. The suggested requirements provide a guide for fishery managers as they consider adopting or enhancing regulations. Ensuring that all transshipment activities— regardless of where they occur—are legal and verifiable would significantly reduce opportunities for IUU practices, and that in turn would benefit those in the fishing industry who already operate legally.

At-sea transshipment refers to a handoff of fish or other marine wildlife between a fishing vessel and a carrier vessel while not in port. This kind of transfer often occurs on the high seas, outside of the exclusive economic zones of any State, and allows the fishing vessel to avoid transiting back to port so the crew can continue fishing. The process can make the movement of fish products to markets more efficient while increasing freshness and value.

In-port transshipment refers to the transfer of fish or other marine wildlife that occurs when vessels are docked or anchored in designated locations near ports and within a State’s territorial waters. National authorities can more easily monitor and inspect this type of transshipment, but it requires the fishing vessel to leave the fishing grounds to return to port and unload its catch to a carrier vessel. 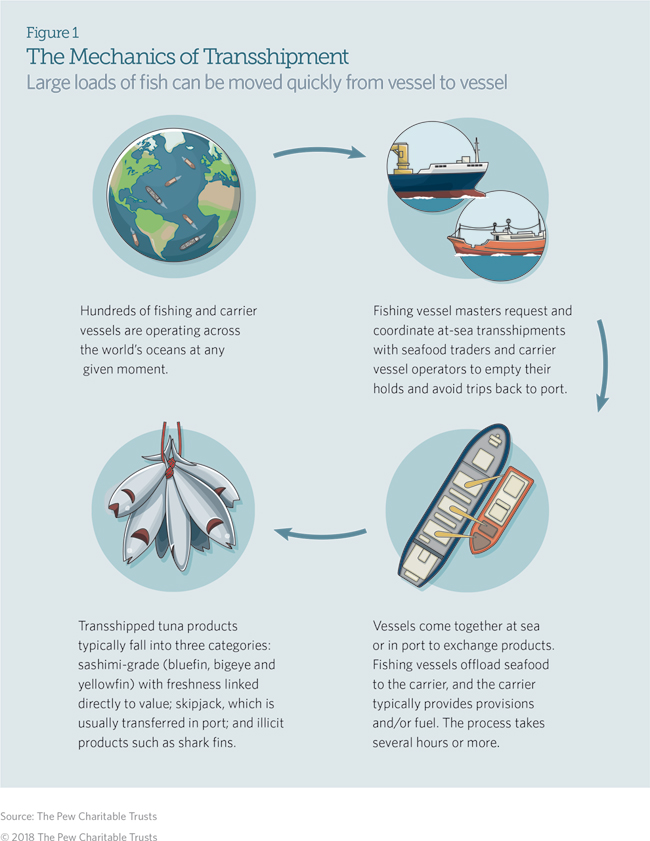 A Closer Look: Transshipment in the Western and Central Pacific Ocean

The Western and Central Pacific Fisheries Commission (WCPFC) recognizes that transshipment at sea is a common practice. But when insufficiently regulated and reported, it contributes to inaccurate catch records and IUU fishing in the Convention Area. In fact, the WCPFC Convention states that Commission members must encourage their fishing vessels to conduct transshipment in port in order to support efforts to ensure accurate reporting of catch.3

Despite this mandate, the number of transshipping events at sea and the number of fishing vessels involved have increased in the past six years. The activity has become the norm rather than the exception.

In 2017, for example, 52 percent of fishing vessels in the WCPFC were authorized to transship on the high seas. That was up slightly from 49 percent in 2016 but significantly more than the 40.5 percent in 2015.4

In 2016, 39 percent of all transshipping in the region took place at sea, up from 36 percent in 2015 and 26 percent in 2014. Of the total catch, the reported percentages of three of the primary tuna species—albacore, bigeye and yellowfin—that were transshipped at sea increased from 19.2 percent in 2014 to 22.5 percent in 2016 even as the total longline catch of these tunas dropped about 15 percent, or more than 40,000 metric tons. The largest change was in the total share of albacore reported as transshipped on the high seas, which more than doubled in those two years from 11.8 to 25.3 percent of the overall catch.5

These trends clearly illustrate the need for additional rules on transshipping in the WCPFC Convention Area to ensure full and effective control and monitoring of these activities and to reduce their contribution to illegal fishing. 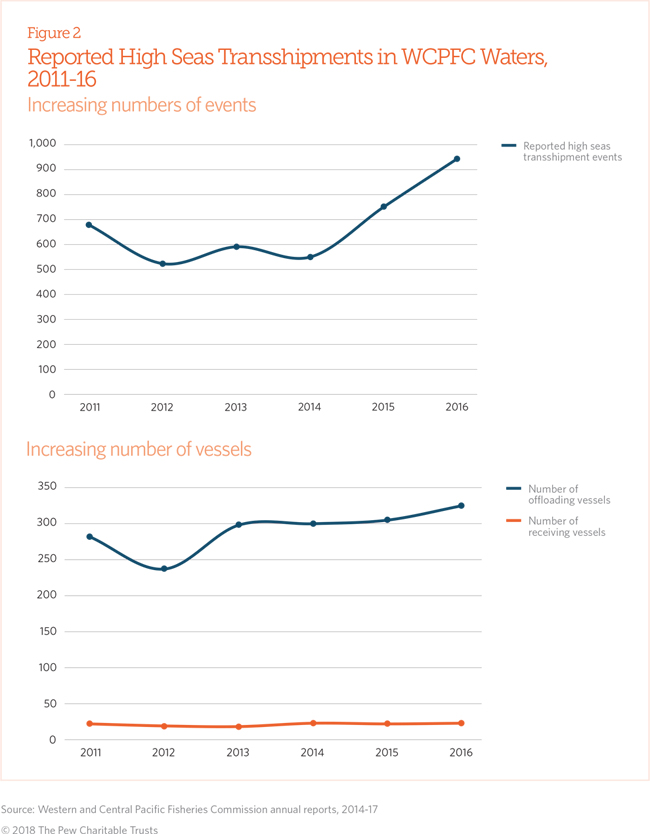 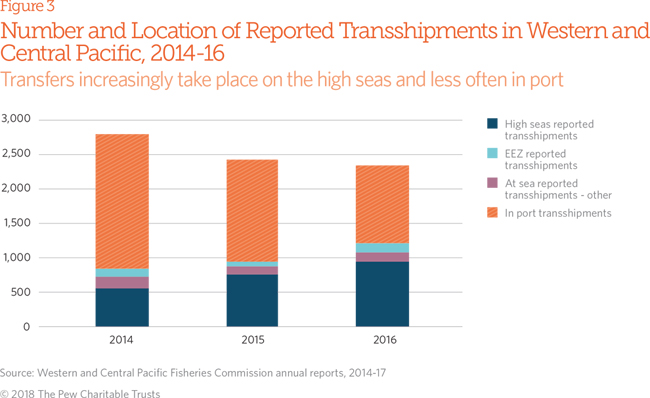 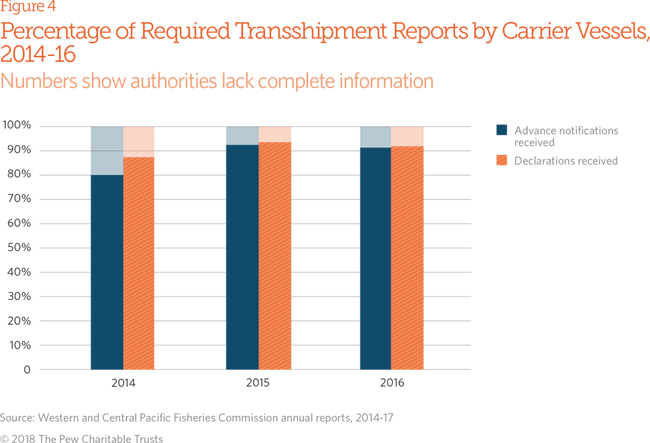 The essential components of transshipment reform

Transshipment can be an effective and efficient way to quickly get fish products, especially sashimi-grade tuna, to market. However, when these activities are not properly monitored or regulated, bad actors can misreport or launder illegal catches or undertake other illicit activities while engaged in transshipment. Oversight of transshipment needs to be improved in three main areas: 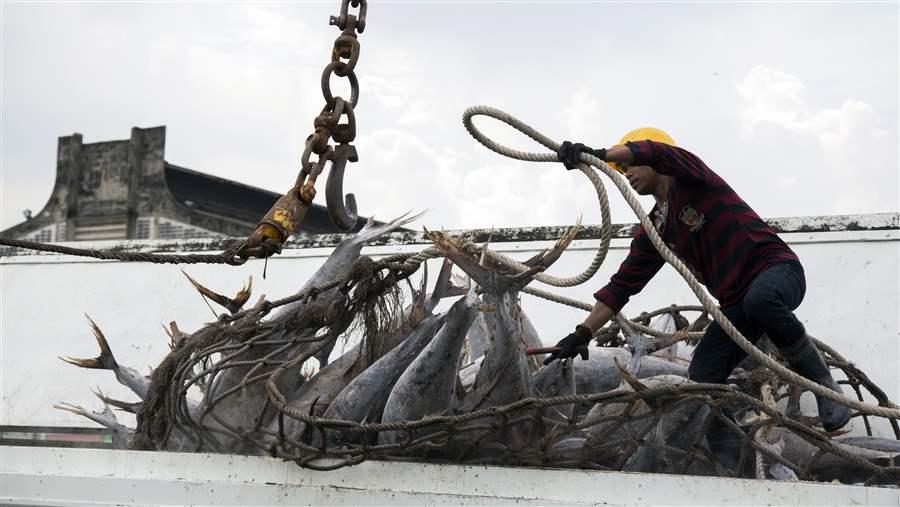 Frozen tuna are offloaded from a Thai-run fishing vessel while docked at port on the Chayo Praya River near Bangkok. 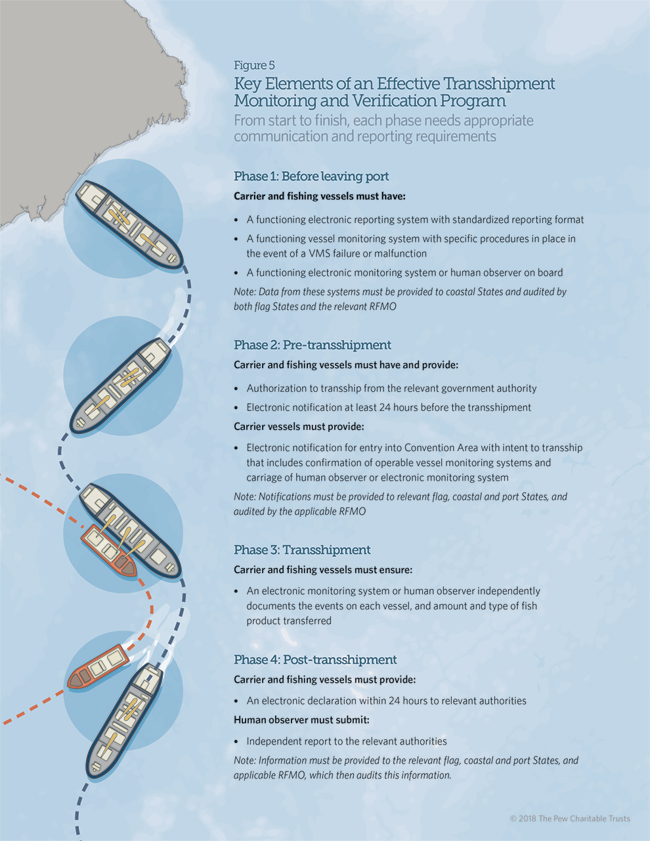 The path to reform

For most of the world’s fisheries, transshipment is regulated by the RFMO that covers the ocean area where the fishing takes place. However, there is no single set of global standards. That means the requirements vary widely, especially within the five tuna RFMOs, leading to significant gaps and inconsistences in regulations and reporting.

In recent years, the United Nations has focused on transshipment reform. The General Assembly’s 2014 Sustainable Fisheries Resolution urged States to work with RFMOs to develop and adopt effective monitoring, control and surveillance measures for transshipments.6

It also called on States to support an effort by the Food and Agriculture Organization of the United Nations (FAO) to study transshipment practices and produce guidelines that could be applied globally. This was an encouraging first step, but the initial call has not turned into action. The global fishing community should join in asking that the FAO’s Committee on Fisheries formally initiate a process to develop these guidelines. 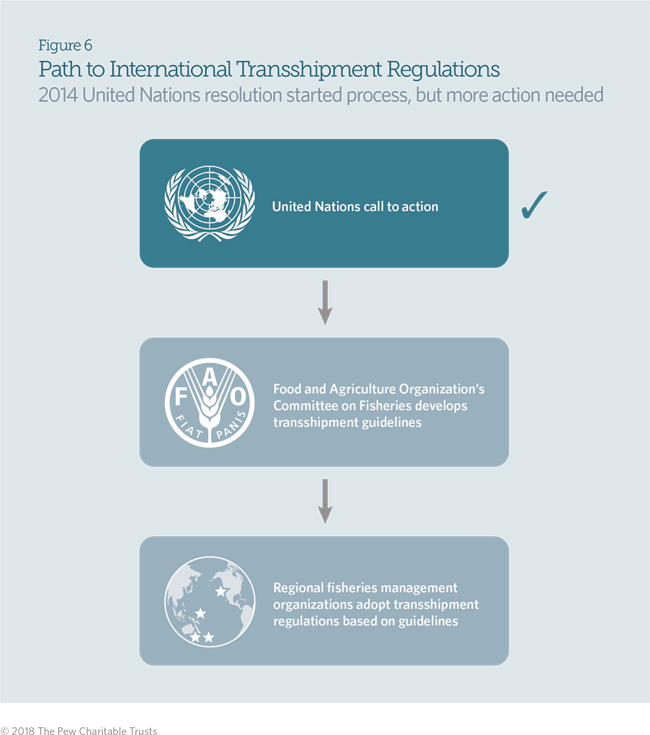 Transshipment is an important and growing part of the fishing industry, especially in the tuna fishery. However, without the proper regulations and reporting requirements in place, these activities can open the door to illegal fishing and the movement of illicitly caught products. Several States and RFMOs have begun to more closely manage transshipment, but global adoption of a full set of best practices is still needed to guarantee comprehensive compliance and data collection.

By working together, flag, coastal and port States, along with RFMOs and the international community, can develop and implement regulations that will ensure that all transshipment of catch is legal and verifiable, and that the opportunities for IUU fishing are greatly reduced.