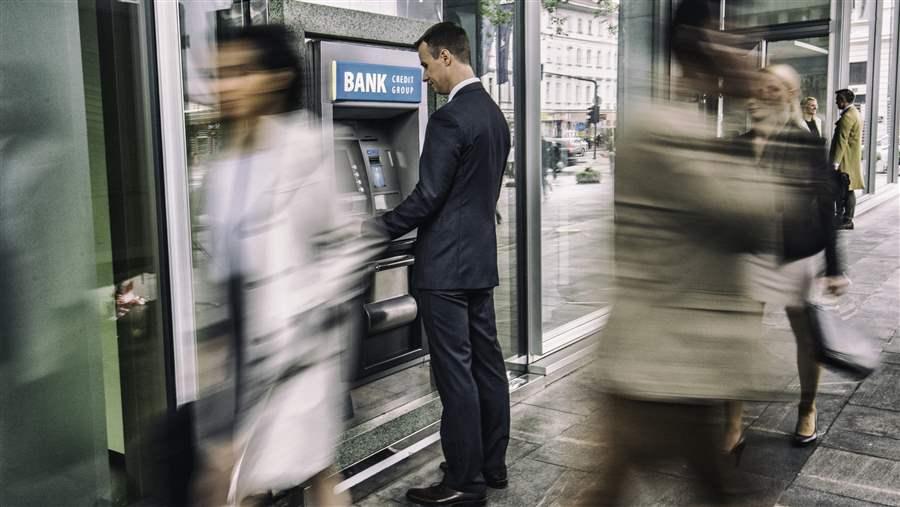 Overdraft programs are often marketed as a service that banks provide to cover occasional budgeting errors, but in practice they are not well understood by consumers and often fail to meet their needs. The Consumer Financial Protection Bureau requires banks to receive affirmative consent (opt in) from customers before providing overdraft coverage for ATM withdrawals and one-time debit transactions, such as point-of-sale purchases. The choice to opt in greatly affects how much a customer pays in fees, because debit purchases and ATM withdrawals are among the most common transaction types, and most of the largest U.S. banks typically charge $35 per overdraft. (Consumers who do not opt in can still be charged overdraft fees for checks, certain electronic transactions, and some recurring debit transactions, such as automatic membership renewals.)

To better understand the financial realities of consumers who use overdraft—how they think about and employ it, and what services they need to better manage their accounts—The Pew Charitable Trusts conducted a survey of those who have overdrawn their accounts at least once in the past year. In some instances, overdrafters have been differentiated by the number of times or the ways they incurred fees; otherwise, the figures show all overdrafters. The research found that most overdrafters do not know they have the right to avoid overdraft fees and that some use overdraft as a form of credit even though it is not regulated like other consumer credit products.

This chartbook shows that a significant portion of overdrafters misunderstand their rights regarding overdraft fees, which suggests that consumers need more information and support to better comprehend and exercise those rights. At the same time, the research indicates that a sizable group of overdrafters use their banks’ overdraft programs as a small-dollar credit product. Consumers who use overdraft as a way to borrow could benefit from access to small installment loans with lower costs, affordable payments, and more time to repay. Without such loans, many consumers will continue to use expensive overdraft programs—as well as high-cost nonbank credit, such as payday loans—to cover expenses. 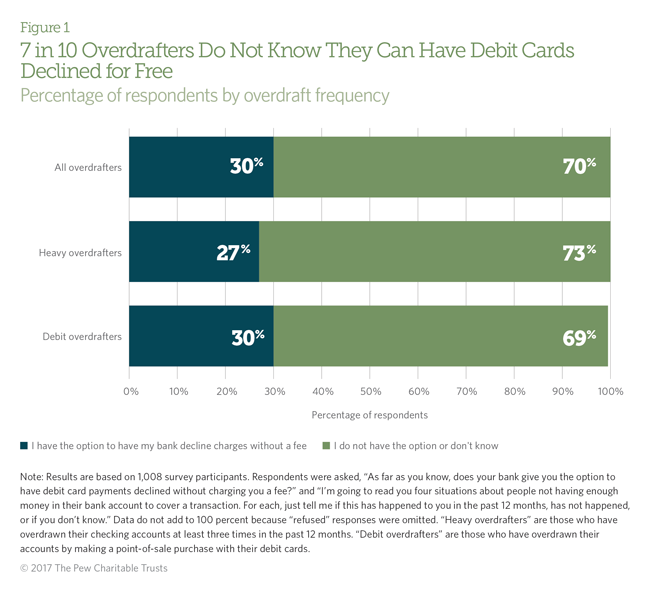 Debit transactions are the primary way in which consumers make payments from their checking accounts.1 Among those who have overdrawn their accounts in the past 12 months, more than half are “heavy overdrafters” (at least three overdrafts per year). Most of the heavy overdrafters—as well as nearly 70 percent of all consumers who paid debit card overdraft fees in the past year—did not know that they have the right to have debit transactions declined at no cost. 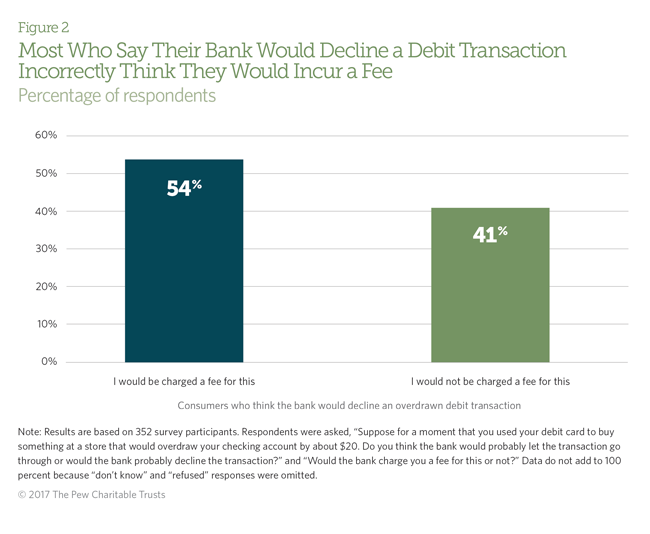 Banks automatically decline onetime debit and ATM overdrafts without a fee unless the customer has opted to have such transactions processed for a fee.2 However, among overdrafters who think their debit overdraft would be declined, 54 percent wrongly believe they would be charged a fee.3 This suggests that many consumers do not understand their rights and may be opting in to overdraft programs based on incorrect assumptions. 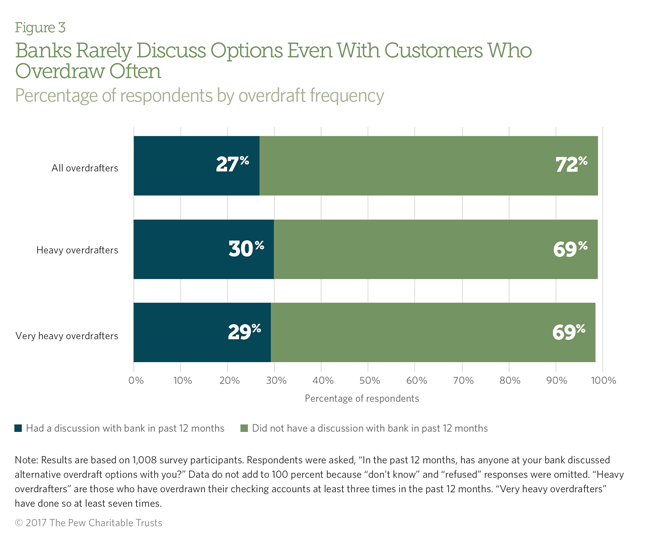 Fewer than 30 percent of overdrafters have discussed options with their bank in the past year. Even among heavy and very heavy overdrafters, such conversations are uncommon. In 2010, the Federal Deposit Insurance Corp. (FDIC) issued guidance to the banks it regulates, urging them to provide meaningful follow-up with very heavy overdrafters, but this survey suggests that banks are not engaging in follow-up.4 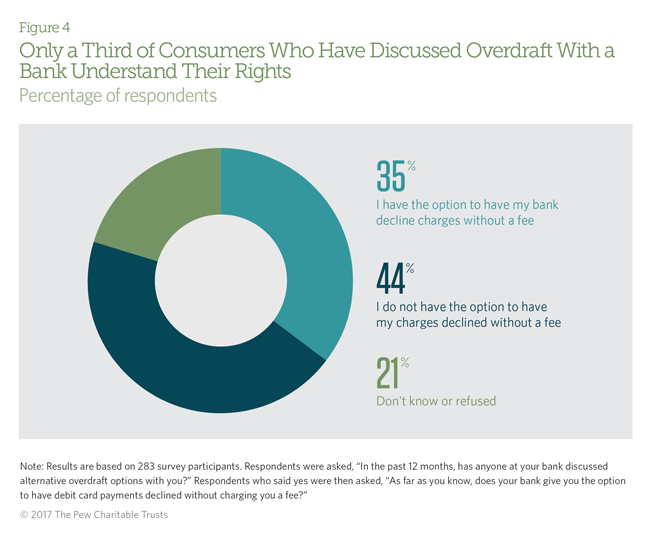 Among the minority of overdrafters who say their banks have discussed alternatives with them, the information provided does not appear to have enhanced understanding of their rights. Almost two-thirds were still unaware that their debit card overdrafts could be declined without a fee. Previous research has found that most overdrafters do not recall opting in to overdraft programs for ATM and one-time debit card transactions.5 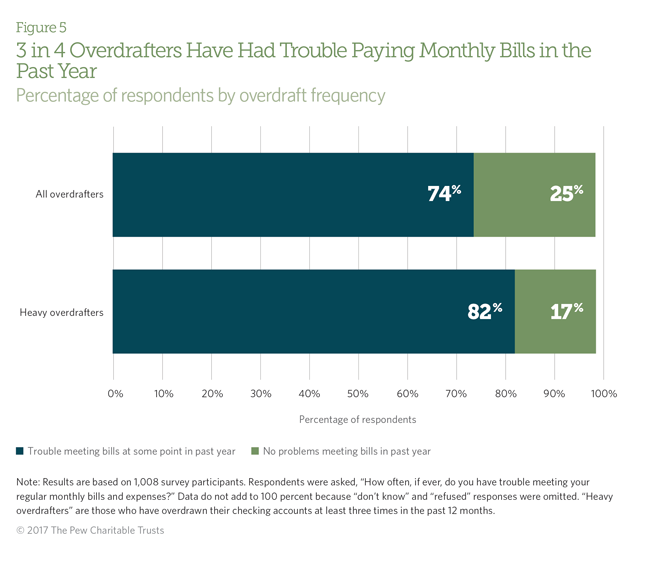 Most overdrafters, including more than 80 percent of heavy overdrafters, have had trouble meeting their regular monthly financial obligations at some point during the past year. In addition, 38 percent of overdrafters report income volatility, meaning that their incomes vary “somewhat” or “a lot” from month to month. Other research has found that this volatility is a factor in households’ periodic difficulties covering monthly expenses.6 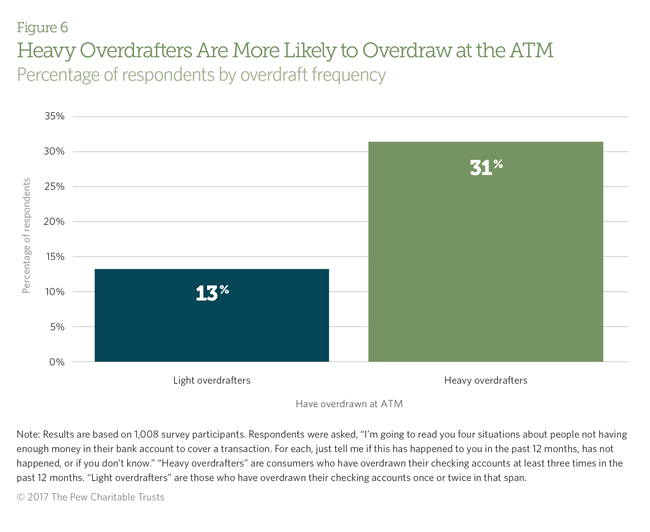 When consumers overdraw their accounts at ATMs, they are effectively taking out a loan: borrowing money directly from the bank and repaying it, plus a fee, upon their next deposit. Heavy overdrafters are more than twice as likely to do this as light overdrafters (those who have overdrawn their accounts only once or twice in the past 12 months). Borrowing money by using ATM overdrafts is much more expensive than most forms of cash credit: It must be repaid in full from the borrower’s next deposit and typically carries a flat fee of $35,7 which often amounts to an annual percentage rate of more than 1,000 percent.8 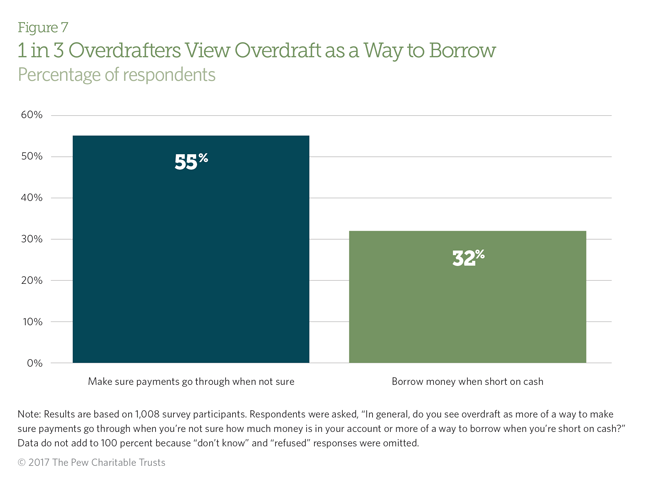 Regulators and banks treat overdraft as a service to cover customers’ occasional budgeting errors rather than as a form of credit. Overdrafters have a different perspective: A third of them see it as a way to borrow money when they are short on cash, but this leaves them without the protections of standard credit rules and regulations that govern other loans, such as clear disclosures and reasonable time to repay via affordable installments.9 Other research has found that 5 percent of checking account holders pay at least 20 overdraft fees a year, which suggests that they are mainly using overdraft as short-term credit.10 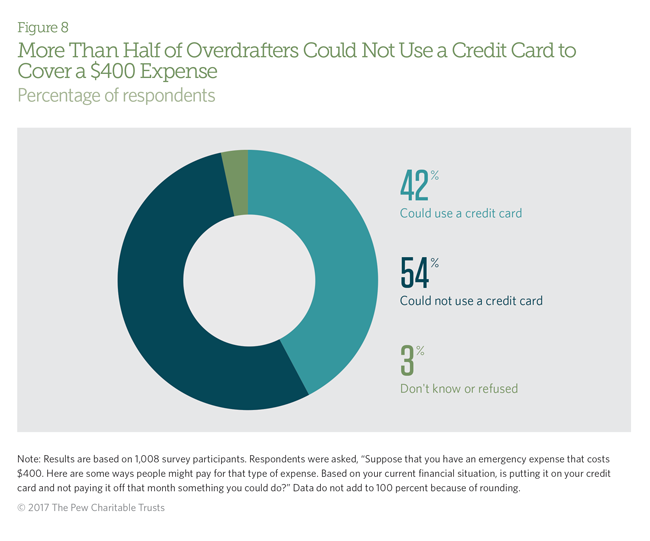 Most overdrafters say they do not have enough credit available on a credit card to cover a small expense, and they also say they have weak credit scores. Permitting banks and credit unions to offer lower-cost small installment loans would help these customers cover shortfalls more affordably and with a reasonable repayment time frame. Unlike overdraft, these loans could also improve borrowers’ credit scores, and thereby their access to traditional credit, because the payments would be reported to credit bureaus. 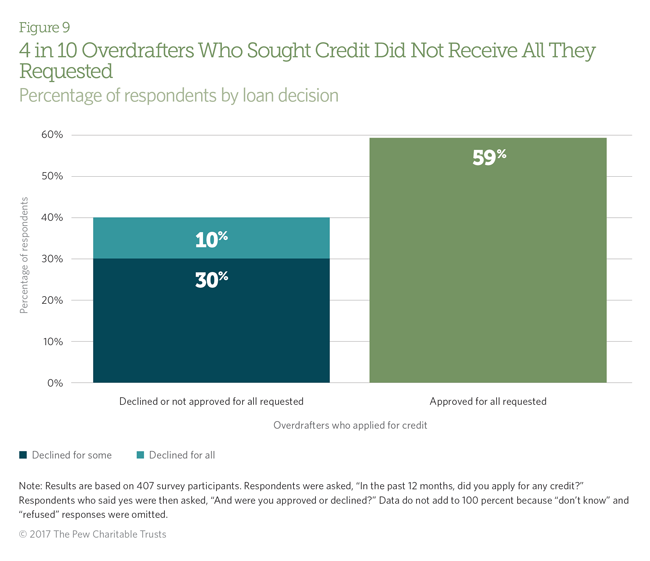 In the past year, 2 in 5 overdrafters applied for credit. Among those, 30 percent were declined and another 10 percent were only partially approved. So overall, 4 in 10 did not receive the amount they requested. 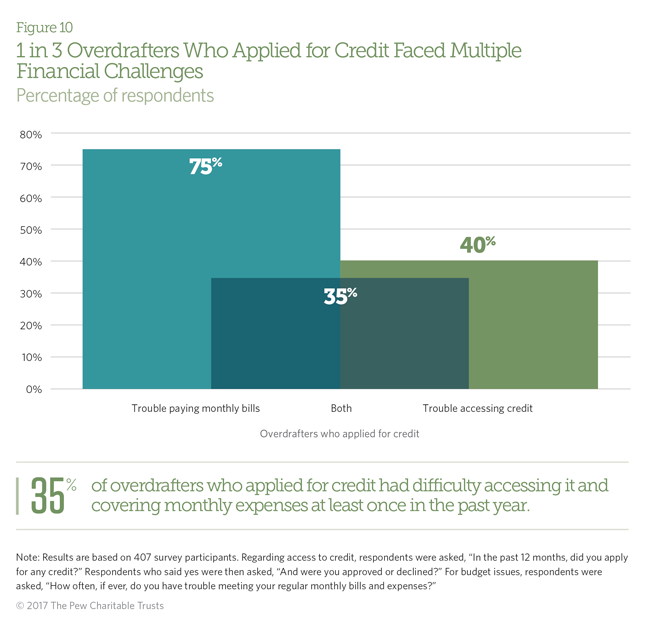 A third of overdrafters who apply for credit have had difficulty both accessing credit and paying their monthly bills at some point during the year. This combination of risks drives consumers to very high-cost credit—such as overdraft, payday loans, pawnshops, auto title loans, and rent-to-own stores—to meet their needs. Prior Pew research found that more than half of payday loan borrowers had overdrawn their accounts in the past year and that payday borrowers are more likely than nonborrowers to overdraw with their debit cards.11 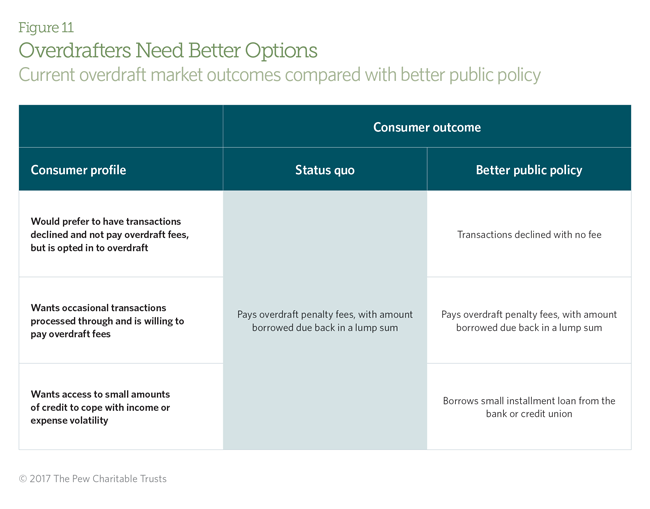 In today’s overdraft market, some consumers are unaware they have the right to have their transactions declined without a fee, while others wish to borrow small amounts of credit. Banks have expressed a willingness to offer small installment loans, but to date, a lack of regulatory guidance on appropriate underwriting, compliance, and other lending requirements has prevented them from doing so. With better policy, consumers who do not want overdraft transactions processed and those who want to borrow money could get the financial services they need to meet expenses, handle financial volatility, manage their budgets, and avoid excessive penalty fees.

Consumers use and view overdraft programs differently depending on their financial circumstances, and the current marketplace is failing to effectively serve a large share of customers. Overdrafters largely do not understand their rights, particularly with respect to opting in to overdraft. Most, including those who overdraw their accounts frequently, report that their banks do not communicate with them about less expensive options. Even when conversations do happen, they do not typically lead to a better understanding of opt-in rights.

Some consumers view overdraft programs simply as a way to make sure a payment goes through when they may not have adequate funds available, but a third see it as a way to borrow when they are short on cash. Those who use overdraft repeatedly pay high prices for those small loans, because they lack sufficient access to affordable credit that can meet their needs. For many of these consumers, the primary alternative to overdraft is a highcost nonbank loan, such as a payday loan, to cover expenses. With clarification from regulators, banks and credit unions could better serve these customers by providing small installment loans with lower costs, affordable payments, and more time to repay.