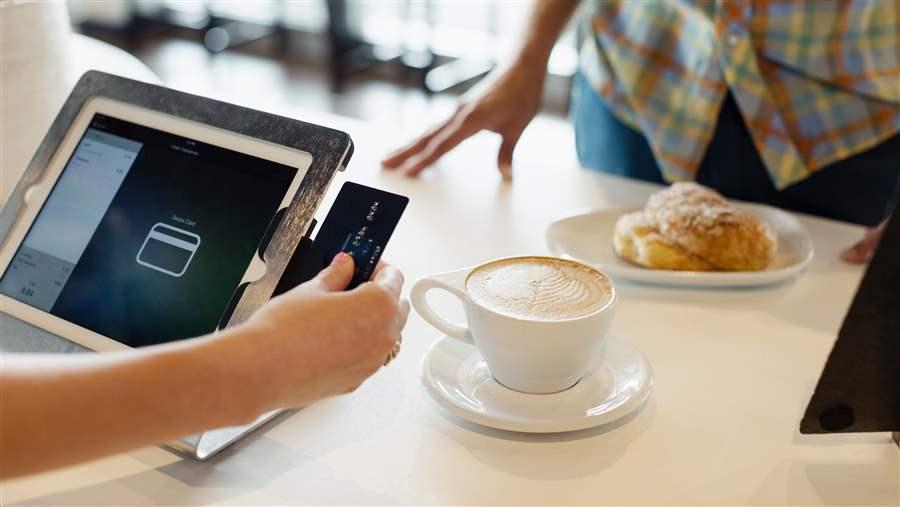 Most heavy overdrafters earn less than $50,000 a year, and their overdrafts consume a relatively large proportion of their income.

For a fee, typically $35, most U.S. banks (84 percent of the largest) allow consumers to overdraw their accounts when they lack sufficient funds to cover a transaction.1 The Consumer Financial Protection Bureau (CFPB) has found that the median transaction amount of purchases that generated such a fee was just $50 and, for debit card usage, merely $24.2 A small proportion (18 percent) of account holders pay the vast majority (91 percent) of all overdraft fees triggered by debit cards, checks, and automated clearinghouse (ACH) electronic transactions.3 These customers paid more than three overdraft fees a year.4

Overdraft fees cause some of the most financially vulnerable consumers to leave the banking system. Thirty-one percent of those without a bank account reported high or unpredictable account fees as one reason for not having an account; 13 percent said it was the primary reason.5 Overdraft fees are often unexpected and unpredictable: Most consumers do not learn of an overdraft for two or more days.6 More than two-thirds of overdrafters say they would prefer to have a transaction declined rather than incur the $35 fee.7

In 2015, The Pew Charitable Trusts commissioned a survey of “heavy overdrafters,” those who incur over $100 in overdraft and nonsufficient funds fees—or roughly three $35 fees—each year.[viii] For these consumers, overdraft service is not just an occasional courtesy but an extremely expensive form of credit that is also high risk because it lacks the consumer protections that accompany other credit products. This chart book captures the findings of the survey, notably that most heavy overdrafters are millennials or Generation Xers; more than half are renters rather than homeowners; they generally have below-average incomes relative to the U.S. population; and overdraft fees consumed nearly a full week’s worth of their household incomes on average during the past year.

Pew urges the CFPB to write new rules to ensure that overdraft programs are safe and designed only for infrequent and accidental occurrences. The bureau could achieve this outcome in a number of ways including, by limiting the size of overdraft fees, the frequency with which they can be incurred, or the overall cost. Adoption of the following options, individually or in combination, would help to limit the negative effect of these fees: 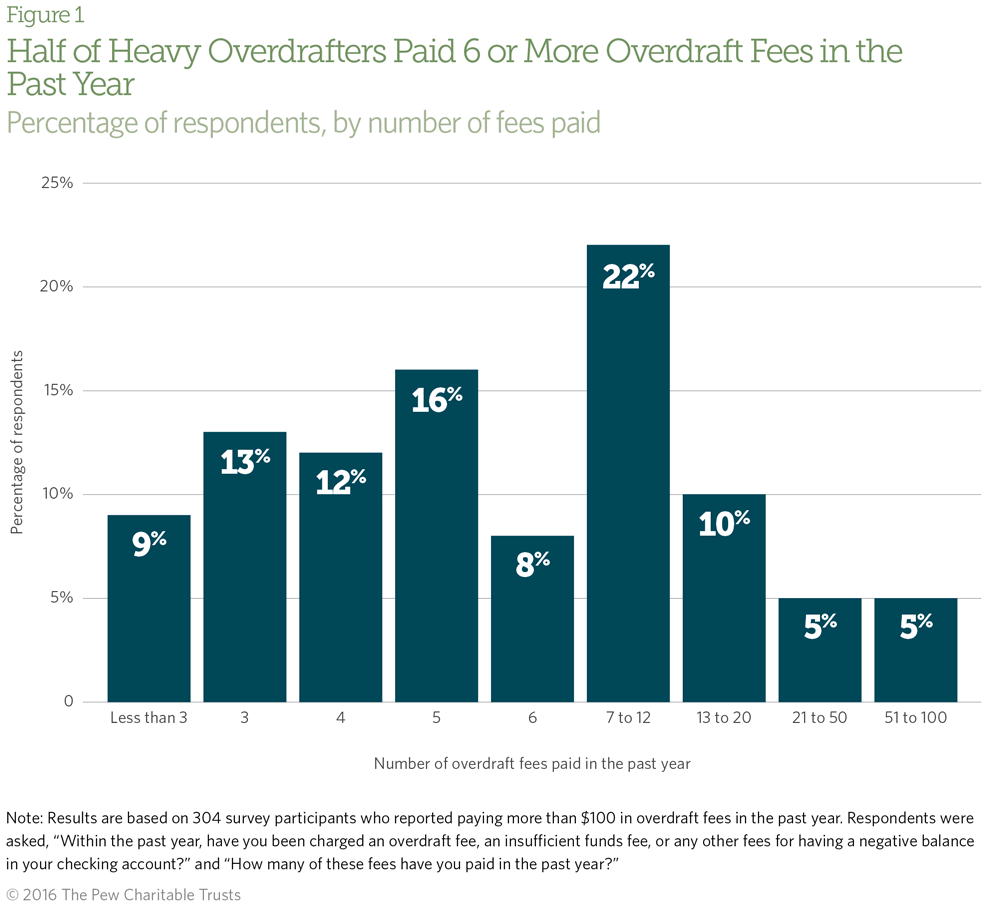 Half of heavy overdrafters incur six or more overdraft fees annually, and 42 percent paid seven or more. Banks previously offered overdraft service to customers only as a rare convenience, but this finding demonstrates that overdraft now serves as a form of short-term credit for many of these consumers. However, overdraft lacks the protections that cover other credit products—such as requirements that financial institutions verify customers’ ability to repay a debt before extending credit and provide a reasonable time to repay as well as limits on late fees—and is extremely costly for consumers. A limit of six overdrafts a year would save the 42 percent of heavy overdrafters who incurred seven or more fees in the past year a median of $210 annually.9 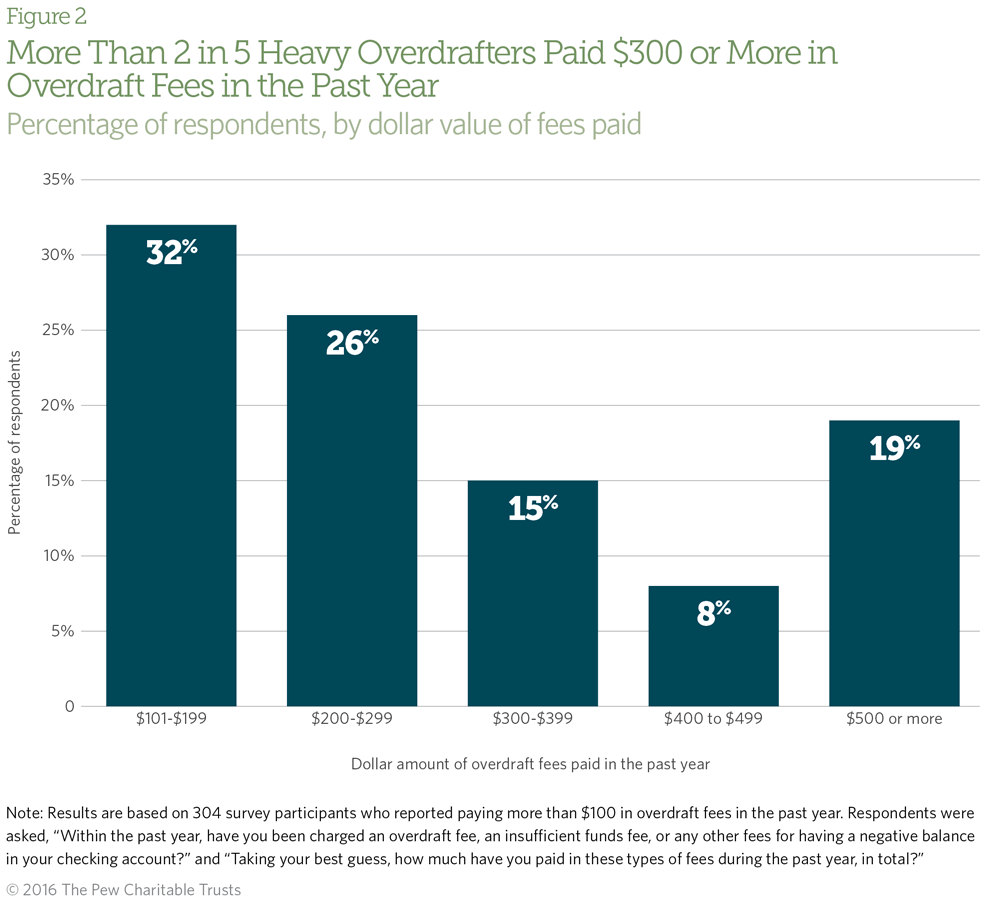 Heavy overdrafters pay a considerable amount in fees yearly. In an effort to reduce the cost of high-frequency overdrafting, the Federal Deposit Insurance Corp. in 2010 published guidance suggesting that the banks it supervises should “limit use by customers as a form of short-term, high-cost credit, including, for example, giving customers who overdraw their accounts on more than six occasions where a fee is charged in a rolling twelve-month period a reasonable opportunity to choose a less costly alternative and decide whether to continue with fee-based overdraft coverage.”10 The CFPB should consider including such a limitation in its new rules to prevent overdraft from becoming very expensive short-term credit for vulnerable consumers. 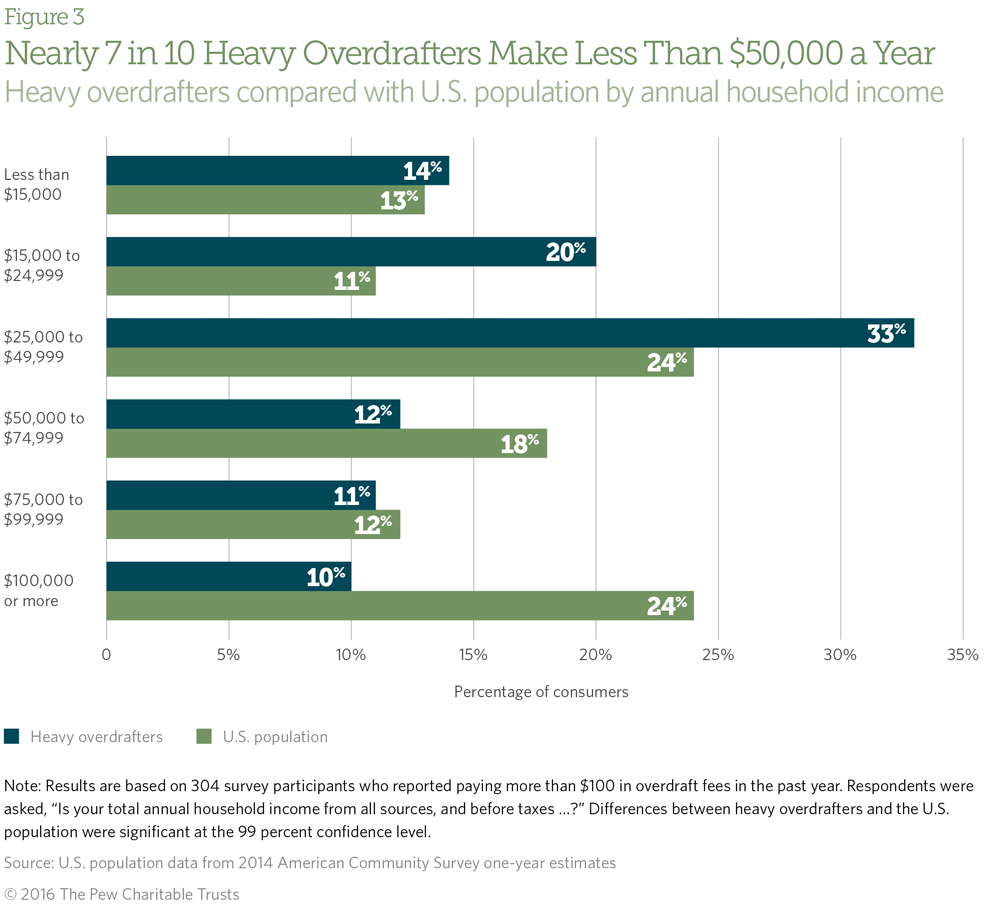 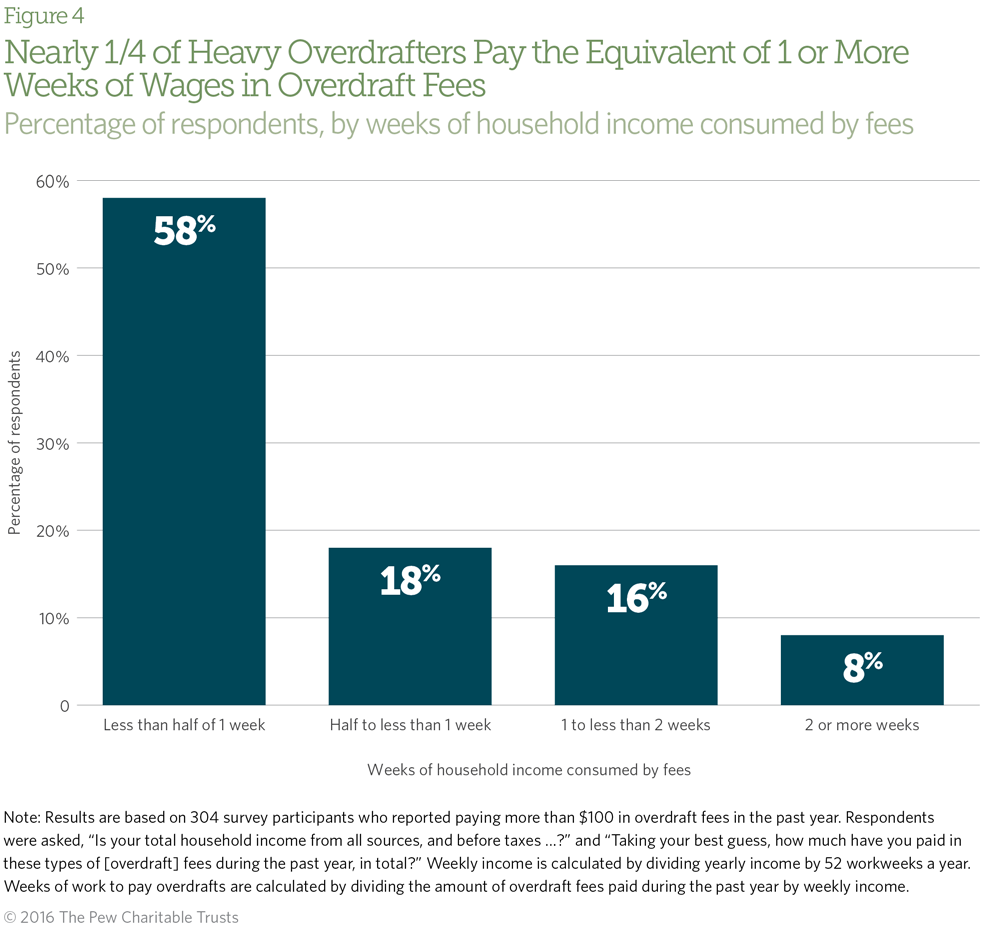 Overdrafts affect the budgets of low-income households much more than those with higher incomes. The average heavy overdrafter paid nearly a full week’s worth of annual household income in overdraft fees in the past year, and the majority of people who expended a week of pay made less than $25,000 annually. 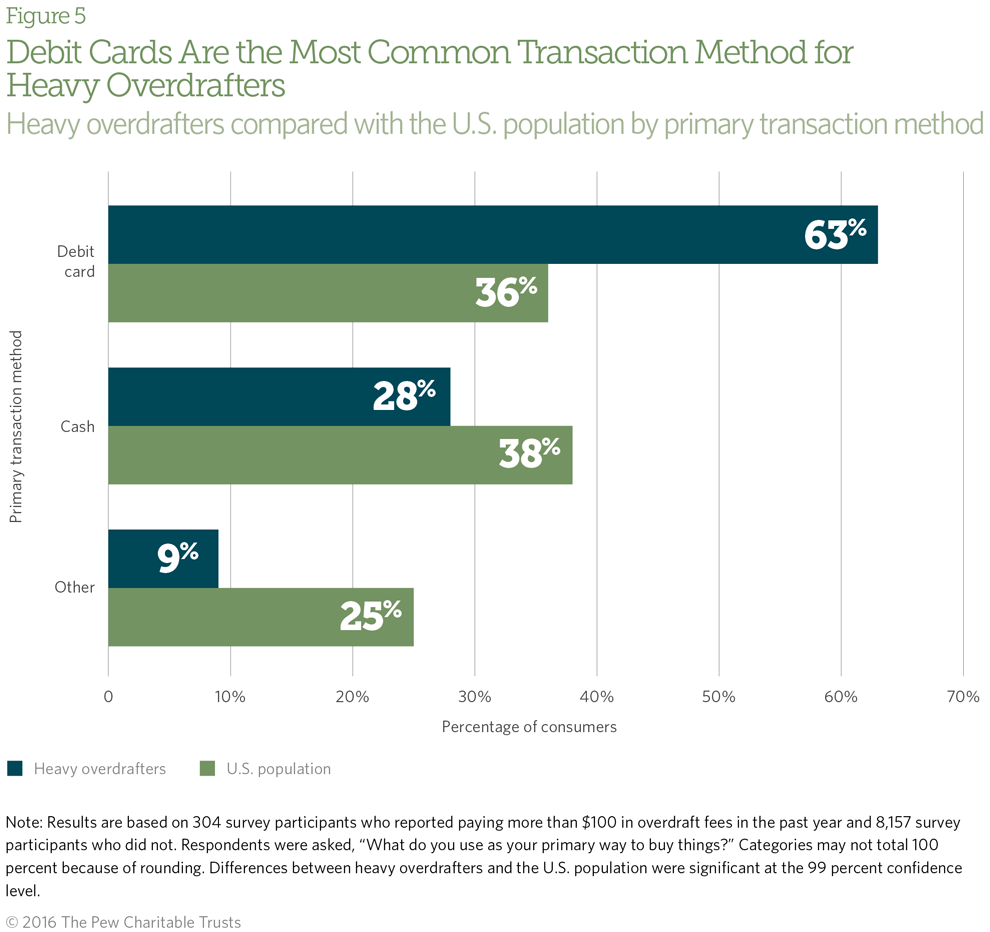 Nearly two-thirds of heavy overdrafters said they mostly use their debit cards to make purchases. The CFPB has found that the value of debit card transactions that overdraw an account tends to be relatively low. The median debit card purchase amount that incurred an overdraft fee was $24, $11 less than the median fee of $35 charged by the largest banks.11 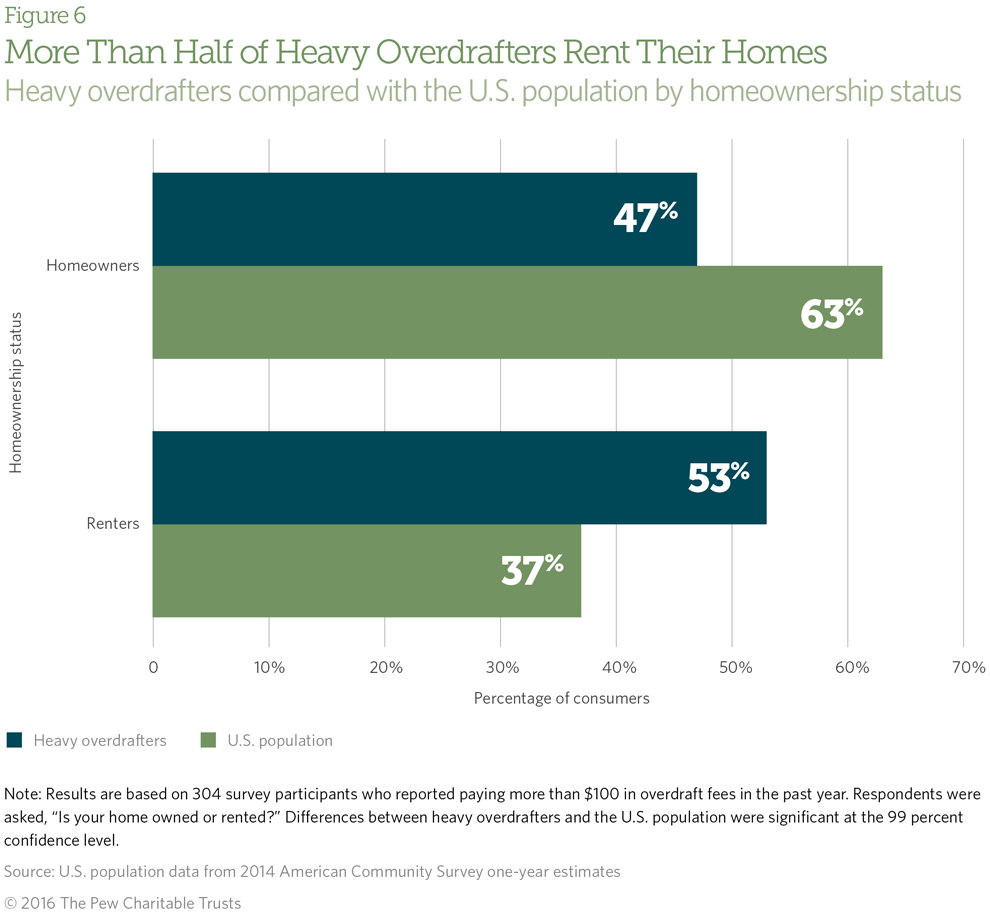 The share of U.S. households that rents has risen since the Great Recession, but heavy overdrafters rent their homes at even higher rates. The Joint Center for Housing Studies of Harvard University found that “between 2001 and 2014, real rents rose 7 percent while household incomes fell by 9 percent.” The center also reported that in 2014, among households earning $30,000 to $44,999, nearly half paid more than 30 percent of their income in rent—a level widely considered unaffordable—and 10 percent paid more than half.12 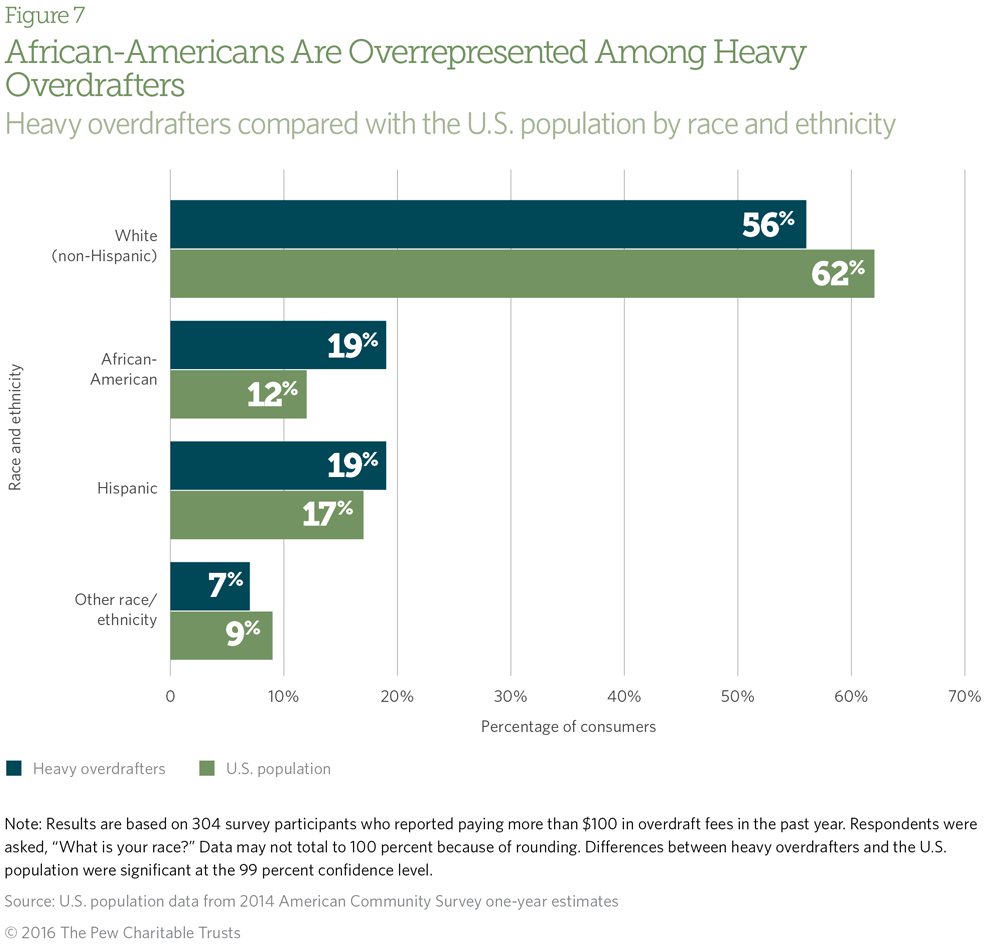 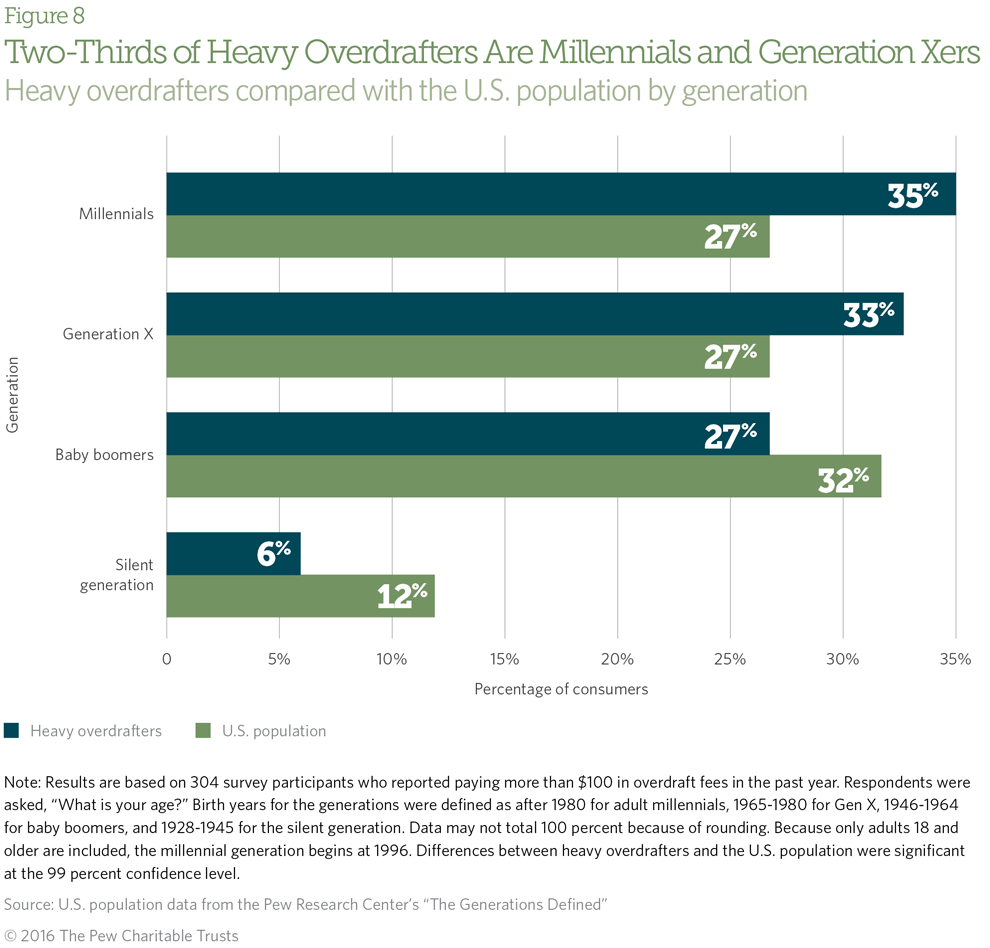 Previous Pew research has shown that nearly three-quarters of consumers who had a debit card point-of-sale or ATM overdraft in the previous year were millennials or Gen Xers younger than 49.13 This pattern persists among heavy overdrafters. 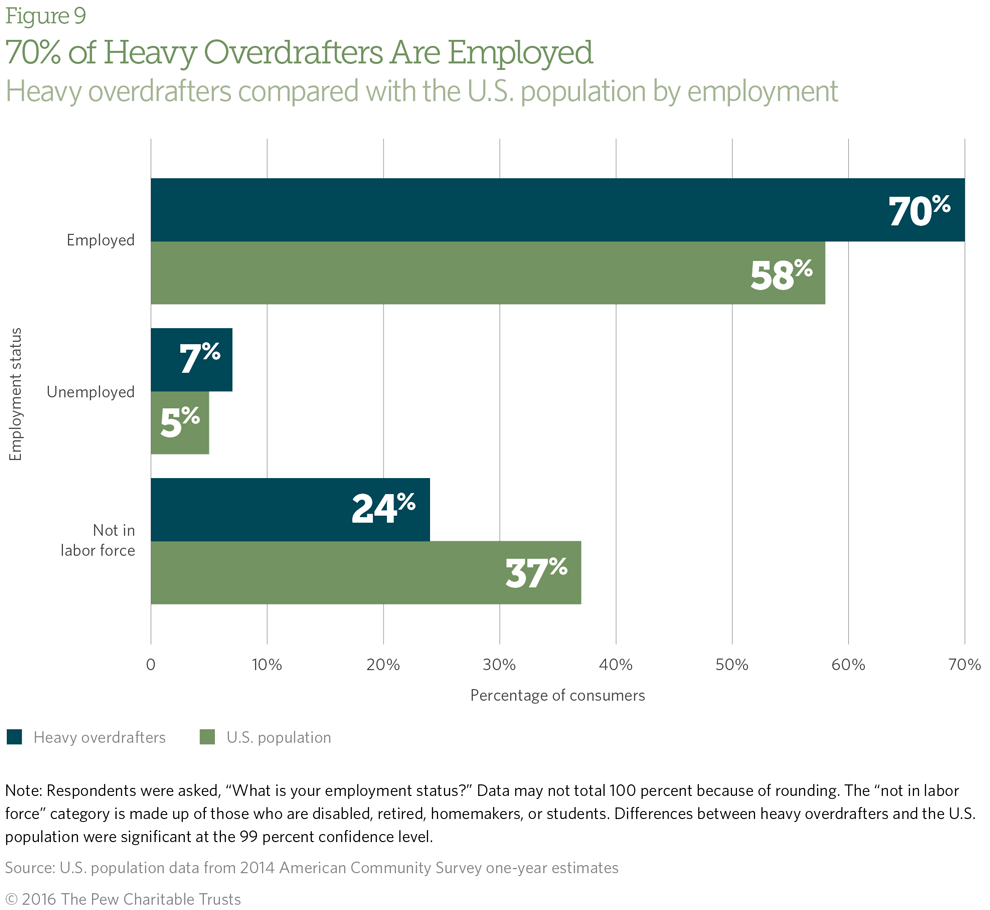 Being employed increases a consumer’s need for a bank account to receive direct deposit and save money but also puts the customer at risk of overdrafts. The FDIC found that employed Americans are more likely than those who are unemployed or out of the workforce to have bank accounts, and nearly 20 percent of those who recently became banked did so at least in part because of a new job. The most common reason survey respondents cited for opening a new bank account was to receive direct deposit.14

Frequent overdrafts are a financial burden, especially because the fees are hidden and unpredictable. Most heavy overdrafters earn less than $50,000 a year, and their overdrafts consume a relatively large proportion of their income. Overdraft fees cause many of these consumers to leave the banking system, forcing them to use cash and alternative financial services, such as check cashers.

The Consumer Financial Protection Bureau should enact rules to limit the negative effects of these fees and ensure that overdraft is not being used as short-term credit. Limiting the size of overdraft fees, the frequency with which consumers can incur them, or the overall costs that consumers could bear would provide needed protections. For example, the bureau could require that overdraft fees be reasonable and proportional either to banks’ costs of covering overdrafts or to the overdraft amount; allow financial institutions to charge no more than six small overdraft fees in any 12-month period; limit such fees to one per negative-balance episode and, once that limit is reached, require that any further overdrafts be covered under the rules for credit; and mandate that banks post deposits and withdrawals in a fully disclosed, objective, and neutral manner that does not maximize overdraft fees.

On behalf of The Pew Charitable Trusts, Social Science Research Solutions (SSRS) conducted a nationally representative random-digit-dialing telephone survey of 304 heavy overdrafters. Interviews were conducted Oct. 15, 2014, through Dec. 10, 2014. A total of 8,461 respondents were screened in order to reach 304 respondents who reported paying overdraft fees of more than $100 in the past year. The remaining 8,157 respondents were used to represent the U.S. population to test for statistical significance of demographic attributes. The margin of sampling error including the design effect is plus or minus 6.5 percentage points.