The Story of Atlantic Bluefin 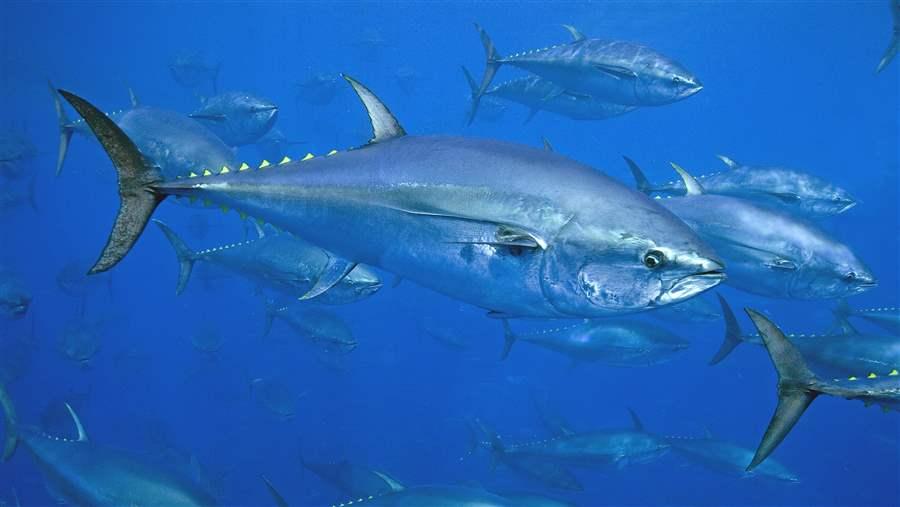 The story of Atlantic bluefin tuna is one of intrigue, filled with international drama, mafia connections, and plot twists worthy of a movie. The main character—Thunnus thynnus—is the largest and most athletic tuna, which can grow to the size of a small car and travel nearly as fast as one too. An Atlantic bluefin starts out no bigger than an eyelash and grows to several hundred pounds and more than 6 feet in length in less than a decade.

Unlike most fish species, Atlantic bluefin are warm-blooded; the heat created in their huge swimming muscles enables bursting speed, sharp vision, and thought processing second to none in the fish world. They are among the Atlantic’s top predators, with few species they won’t eat—and even fewer that eat them.

The fleets of fishing vessels plying the Atlantic—and hoping to cash in on the value that the species has in sushi markets in Japan and high-end restaurants around the world—present the greatest threat to the Atlantic bluefin.

Fishermen are often paid more than $10,000 for a single Atlantic bluefin right at the dock. The value of a high- quality fish at the final point of sale can be tens of thousands of dollars. These transactions add up to be big business. A recent estimate set the value of Atlantic bluefin fishing at nearly $200 million at the dock in 2014— and over $800 million at the final point of sale.1 Experts estimate that, pound for pound, this species is the most valuable tuna in the world and likely the most valuable fish in the Atlantic Ocean or the Mediterranean Sea. 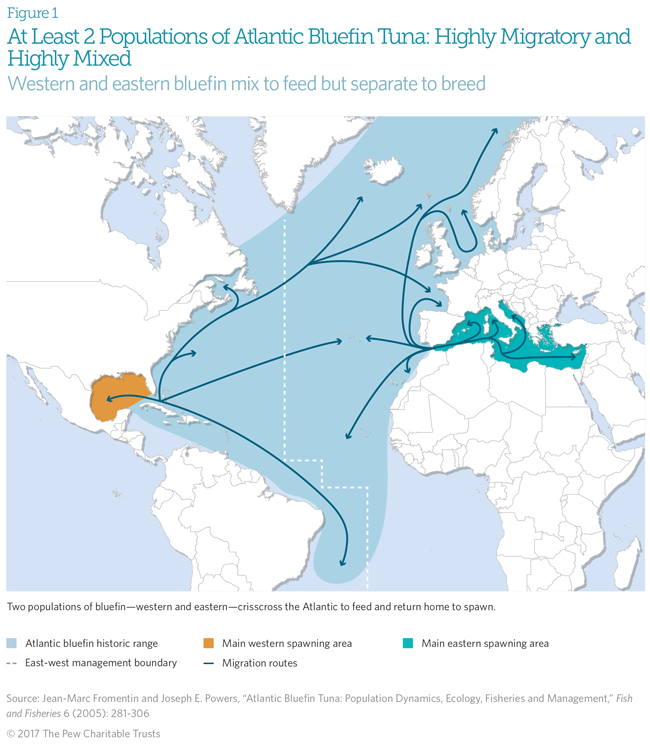 The history of humanity’s interaction with Atlantic bluefin is long; this tuna has been part of fishing lore for centuries. Renaissance paintings of European fishmongers include bluefin. Ancient trap fisheries for Atlantic bluefin are romanticized in Mediterranean art and text. Bluefin are even stamped on early Greek coins.

More recently, in the years following World War II, fishing for this species became an industrial enterprise, and efforts to manage that fishing became a necessity to respond to population declines. In 1966, fishing nations formed the International Commission for the Conservation of Atlantic Tunas (ICCAT), and since then, management decisions have been made by the governments—now numbering 51—that make up this body. Despite their mandate to ensure the health and sustainability of Atlantic tuna stocks, ICCAT managers have often set quotas that are too high, at times against the recommendations of their own scientists, in response to economic and political pressures.

The habits of two distinct Atlantic bluefin populations also make effective management difficult. These tuna feed in the productive waters off the coasts of North America, Europe, and Africa. Once a year, adults take long migrations so they can reproduce in warm waters suitable for eggs and larvae. From their feeding grounds, some Atlantic bluefin swim to the Gulf of Mexico, while others head for the Mediterranean. The adults reproduce where they came from, which has created two genetically distinct populations, the eastern much larger than the western. This difference in population size, the fact that the two mix on their feeding grounds, and the high value of the species at the dock create complex challenges for managers.

The history of humanity’s interaction with Atlantic bluefin is long; this tuna has been part of fishing lore for centuries.

Both populations of Atlantic bluefin were put at risk in the late 20th century. In the 1970s, longline vessels were allowed to catch too many giant bluefin as they gathered in the Gulf of Mexico to reproduce. At the same time, purse seine vessels caught too many juvenile bluefin along the east coast of North America. Bluefin tuna ranching—where “ranchers” fatten small Atlantic bluefin until they reach a more profitable size in net pens— came to the Mediterranean in the 1990s, and purse seine vessels began taking increasing numbers of juveniles in European and North African waters to supply these operations. In the early 2000s, bad actors, sometimes supported by organized crime, illegally caught far more Atlantic bluefin, mostly in the Mediterranean, than their already inflated quotas allowed.2 The extremely high value for this species, insufficient enforcement of existing rules, and the promise of short-term profits fostered a culture of overfishing and illegal activities that risked the future of Atlantic bluefin tuna fisheries—and the continued existence of this iconic species.

A turning point in management

Circumstances changed in 2009, after Prince Albert II of Monaco backed a proposal to ban international trade of Atlantic bluefin under the Convention on International Trade in Endangered Species of Wild Fauna and Flora (CITES). Only then did Atlantic bluefin fisheries management begin to improve in response to pressure from environmental advocates and the resulting media attention. At that time, managers started to follow the advice of scientists, moving to substantially reduce the quotas for both Atlantic bluefin populations. Reliance on science- based management continued for the next seven years. In another positive development, ICCAT in 2016 took steps to implement an electronic catch tracking system intended to help stop illegally caught Atlantic bluefin from making it to market. 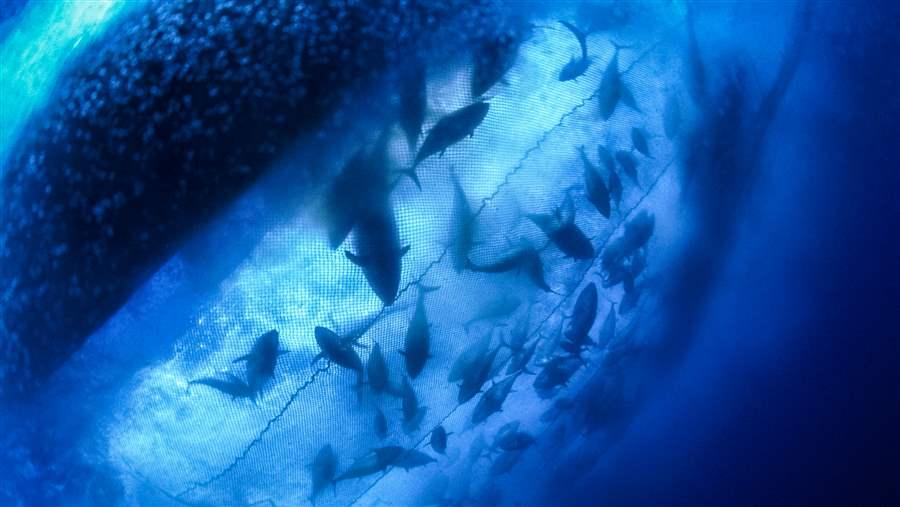 Almadraba is an ancient method of catching bluefin involving a maze of nets that entrap the fish as they enter the Mediterranean to spawn.

The most recent stock assessment completed in the summer of 2017 indicates that these efforts have been good for the eastern Atlantic bluefin population and for the fishing industry. The growth in this population between 2009 and 2015 shows that science-based management works and that rebuilding a species—even those that take years to mature and reproduce—does not have to be a long, painful process. Fisheries managers now must resist the temptation to substantially increase quotas in response to initial signs of growth, which could create a yo-yo effect whereby stocks decline again as a result. Furthermore, the eastern population assessment continues to be plagued by a high level of scientific uncertainty, underscoring the need for a highly precautionary approach. Recently, managers chose to increase the eastern quota by more than 75 percent between 2014 and 2017 and to set the 2017 eastern quota above the scientific advice. Since the new assessment looks only at data through 2015, the impact of these decisions is not yet known.

The picture for the western population, however, is less clear. In 2014, managers chose to increase the quota in response to early signs of growth. But three years later, the most recent assessment suggests that this bluefin population may still have a long way to go before recovering. Evidence suggests that large numbers of eastern Atlantic bluefin are caught by western fishermen,3 making it difficult for scientists to discern how much of the perceived growth observed in the west might actually reflect recovery in the east. In fact, the amount of eastern fish caught by western fishermen could be masking declines in the western population, a possibility that risks the viability of that already much smaller population. 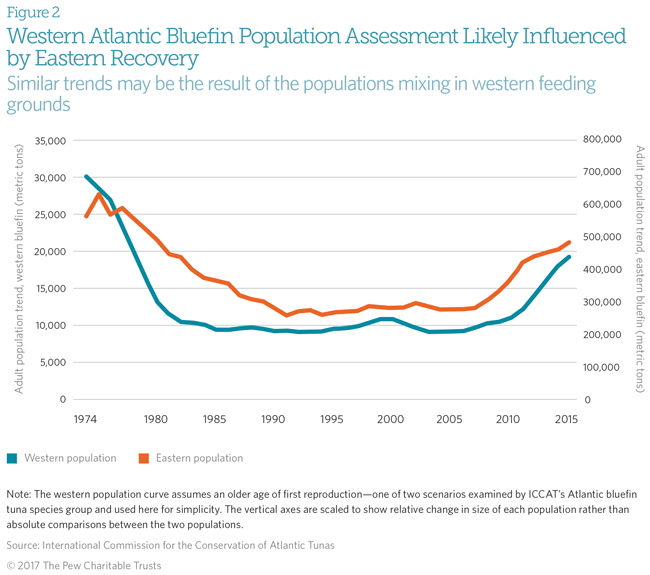 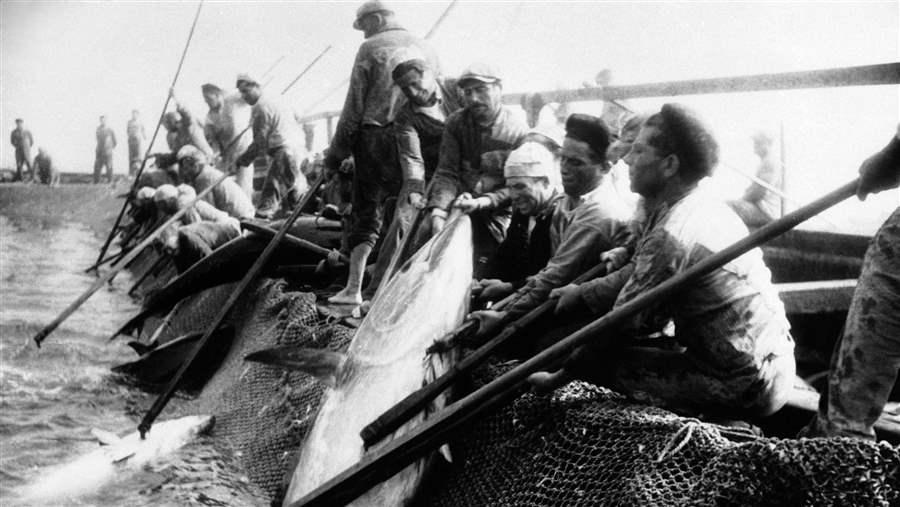 Sicilian fishermen spear and hook tuna during their annual fishing expedition in 1918.

The economic implications of oversupply

ICCAT needs to take a few additional steps to protect the future of this iconic fish and its associated fisheries. Commission scientists must provide clear, meaningful management advice to policymakers that considers the complexity and uncertainty of their assessments. Managers, in turn, must follow the science and take a precautionary approach to setting quotas. Finally, ICCAT must continue to transition to “harvest strategies” or “management procedures,” a more modern approach to fisheries management. Instead of negotiating catch limits in response to stock assessments, policymakers implementing harvest strategies set a long-term vision for the fishery, including determining in advance how they will respond to changes in the stock status. As seen in other fisheries, the switch from reactive to proactive management is less expensive, less political, and more effective.5

ICCAT has committed to implementing harvest strategies for eastern and western Atlantic bluefin in 2018. Timely implementation of these strategies will be critical to protecting recent gains in both populations and will put ICCAT on a path to ensuring the long-term health of this iconic fish and fishery.

The story of Atlantic bluefin goes back thousands of years, and the ending is not yet written. The next few years will be critical; scientists, policymakers, and stakeholders have important roles to play. Management decisions made this year will affect the future health of these fisheries. ICCAT should follow the science, implement precautionary approaches, and make transparent decisions that take into account the positions of all stakeholders, including representatives of civil society. If managers commit to this approach, the future of Atlantic bluefin can be secured across its entire range.