Today, when fishing nations negotiate catch quotas for Atlantic and Pacific bluefin tuna, they generally assume that more fishing is always better for the industry. However, a new study underscores what producers of other commodities, such as corn or oil, already know: Increased global supply can mean less revenue.1 In this case, those who fish for these valuable bluefin species would make less money—despite producing more.

Oversupply also affects those who catch similar fish, such as southern bluefin and bigeye tuna. As the International Commission for the Conservation of Atlantic Tunas (ICCAT) considers quotas for Atlantic bluefin tuna this November, a new study supported by The Pew Charitable Trusts and The Ocean Foundation shows that stabilizing quotas at a conservative level for eastern bluefin is in most cases a better option for the industry, and related industries, than flooding the market with fish.

Global landings of bluefin have been anything but stable, with the catch for the three bluefin species—southern, Atlantic, and Pacific—peaking in 1961 at 143,000 metric tons (mt) a year and then dropping more than 65 percent by 1990. The growth of tuna ranching in the Mediterranean Sea caused landings of the eastern population of Atlantic bluefin to rise, reversing declines in the total catch of these species by the mid-1990s.2

But the eastern Atlantic and Mediterranean bluefin stock could not support this fishing pressure and soon was heavily overfished. Managers did not align quotas for this stock with scientific advice until 2010, a change that brought total bluefin landings globally back down to 1990 levels. As eastern bluefin showed signs of rebuilding, however, quotas were hiked by approximately 20 percent a year between 2014 and 2017 (a 75 percent increase over three years). As market supply has increased in recent years, bluefin prices have fallen. (See Figure 1.)

Now, increases in the eastern bluefin stocks have led to industry calls to raise the eastern quota up to 36,000 mt,3 an additional 52 percent increase from the current limit, begging the question of what this would mean for future prices.

The study, led by Chin-Hwa Jenny Sun at the Gulf of Maine Research Institute, Fu-Sung Chiang at the National Taiwan Ocean University, and Dale Squires at the University of California, San Diego, addresses three questions: What was the impact of the recent spike in eastern bluefin tuna catch on the price of Atlantic bluefin and its substitutes?4 Would boosting the eastern bluefin quota even further benefit the fishing industry? And who stands to win and lose from supply increases? 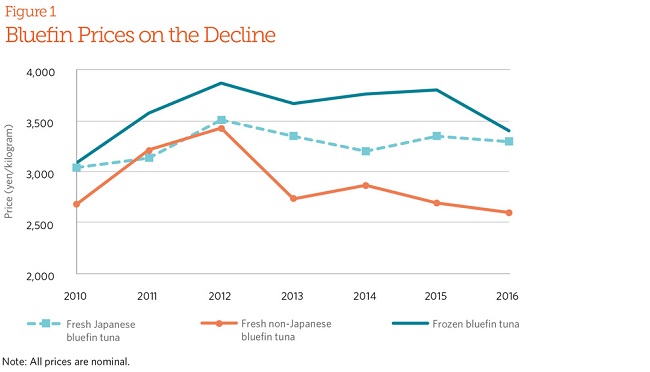 Lastly, the authors noted that these products are close substitutes in the Japanese market, which means the model needs to consider the price impact of changes in their aggregate supply. Looking at the supply of just one of these tunas or tuna products in isolation would underestimate the impact on the price of each product.

The analysis found that, all else being constant, the price for bluefin and bigeye declines as their aggregate supply increases and that these price drops differ depending on the source or species of tuna. For three of the five products examined, prices would decrease more rapidly than the aggregate supply increased, meaning that the revenue of the fishermen supplying these products would actually decline even if their landings increased. (See Table 1.) This is even more of a problem for western Atlantic bluefin fishermen, whose quotas stabilized as eastern bluefin quotas rose by 20 percent in 2016 and 2017, and for Pacific bluefin fishermen, whose quotas declined when eastern bluefin quotas increased.

The two sectors that are not expected to be harmed by a greater aggregate tuna supply are the frozen Atlantic and fresh and frozen southern bluefin industries, but a number of factors could minimize an individual fisherman’s ability to profit from this circumstance. Unless they have individually assigned quotas, for example, fishermen selling these products are not guaranteed to be able to increase their own catch, even if their own fishery’s quotas are raised. Additionally, if quotas are level, as they were for southern bluefin in 2016 and 2017, fishermen could simply face lower prices because they would have little ability to boost their individual catch as aggregate supply from elsewhere increases.

The researchers then applied their findings and examined the impact on prices of the large increase in the supply of eastern Atlantic and Mediterranean bluefin that took place between 2014 and 2017. They then predicted the impact of raising the eastern bluefin quota further to 30,000 or 40,000 mt over the next management cycle (three years through 2020). (See Table 2.) 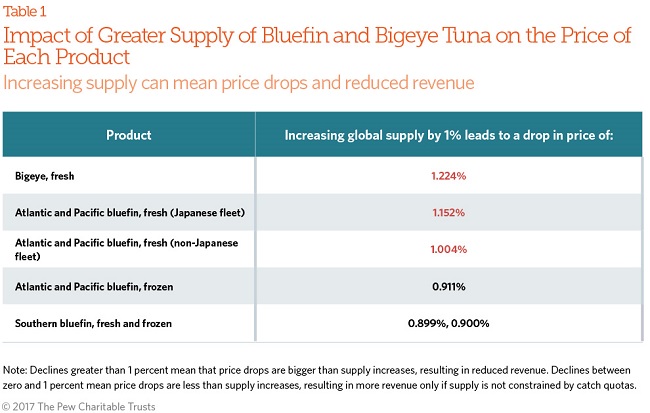 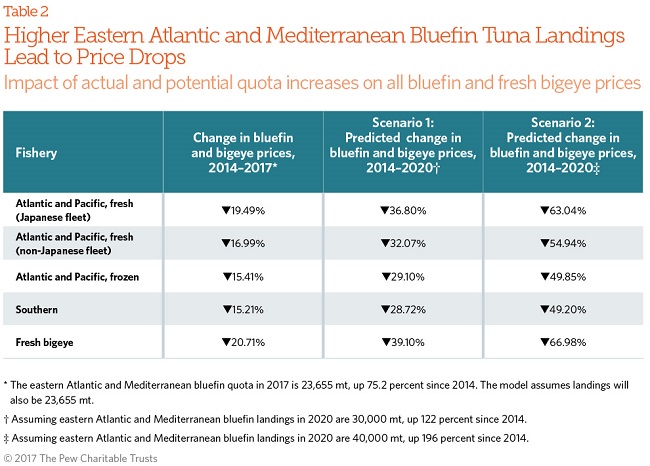 This study illustrates that increasing the quota of eastern bluefin tuna is not in most bluefin fishermen’s economic interest and would harm bluefin and bigeye industries around the world. Stabilizing the bluefin catch is not only more profitable for most fishermen, but it is also a less risky approach to tuna management.