Immigration Enforcement Along U.S. Borders and at Ports of Entry

The federal government processed 362 million citizen and noncitizen travelers through U.S. ports of entry in fiscal year 20131—more than 242 million people by land, 102 million by air, and 18 million by sea.2 That year, authorities apprehended some 421,000 people trying to enter the country illegally outside those official ports.3

Border security is primarily a federal responsibility and involves managing the legal flow, and preventing the illegal entry, of people and goods into the United States. In recent years, though, state and local authorities increasingly have collaborated with federal agencies on immigration-related efforts at the nation’s borders. This brief explores the federal, state, and local work in enforcing immigration laws at those borders and ports of entry. The Pew Charitable Trusts addressed similar issues in the country’s interior in a July 2014 brief, “Immigration Enforcement Within the Nation’s Borders.”

In discussions of immigration and border security, attention often focuses on the 1,954-mile land border between the United States and Mexico. Yet the federal agencies involved in immigration enforcement have personnel and operations at other U.S. borders and at ports of entry in all 50 states. Over the past two decades, increased federal funding for border security has meant more facilities, equipment, and personnel devoted to this mission. Since the creation of the Department of Homeland Security (DHS) in 2003, funding for U.S. Customs and Border Protection, the agency that manages the nation’s borders, has risen from $6.6 billion4 to $12.4 billion in fiscal 20145—in real terms, a 91 percent increase.

There also have been expanded attempts to coordinate activities with state and local law enforcement. Although no nationwide program of border cooperation exists, pockets of activity and examples of collaboration are evident along land borders. Over the past decade, partnerships, programs, offices, and task forces have been started to share information and coordinate law enforcement efforts among various levels of government.

The relationship between states and the federal government received heightened national attention in 2014 as some states put additional resources into border enforcement in response to an increasing number of unaccompanied children illegally crossing the southwestern border. In July, for example, Texas sent 1,000 members of the National Guard to its border with Mexico to reinforce federal efforts.

Though federal agency operations span many border security missions, including protecting the nation from terrorism, illegal drugs, and the unlawful entry of goods, this brief focuses only on the entry of people. The figures presented here on staffing and funding include roles beyond that mission, however, because it is often not possible to isolate resources dedicated to specific activities.

This brief is not meant to be an exhaustive accounting of federal and intergovernmental activities at the border and ports of entry. Instead, it provides examples demonstrating that border security is, in reality, occurring not just at the land borders with Mexico and Canada, but all across the United States, and that there are places where different levels of government are collaborating to address security concerns. Understanding the geographic breadth of these efforts can give policymakers a broader and more complete picture of immigration-related border enforcement activities.

Pew takes no position on federal, state, or local laws or policies related to immigration.

The definition of the border for federal immigration enforcement purposes is broad. Activities take place along international land boundaries. Border enforcement also takes place at many seaports and along the coastline. Related maritime operations occur along the northern border on the Great Lakes and St. Lawrence Seaway, and around U.S. territories, such as Puerto Rico.

In addition, border enforcement exists well inside the United States at international airports and up to 100 miles inside the physical border with Mexico or Canada, where U.S. Customs and Border Protection has the authority to operate checkpoints and transportation checks.

Many federal agencies have a presence across the states in enforcing immigration laws at the borders and at ports of entry. DHS and the Department of Justice are the key federal actors in immigration-related border security, but other federal agencies, such as the Department of Defense, play more limited roles. These agencies often work together and at times cooperate with state and local governments.

DHS houses three agencies involved in immigration-related border management: U.S. Customs and Border Protection, U.S. Immigration and Customs Enforcement, and the U.S. Coast Guard. Although headquartered in Washington, each has personnel and other assets throughout the states.

The Customs and Border Protection State, Local, and Tribal Liaison Office is headquartered in Washington, though each of the nation’s 20 Border Patrol sectors has liaison staff that interact with officials from state, local, and tribal governments. The liaison offices work to communicate directly with communities through meetings with local leaders, stakeholders, and the public.* 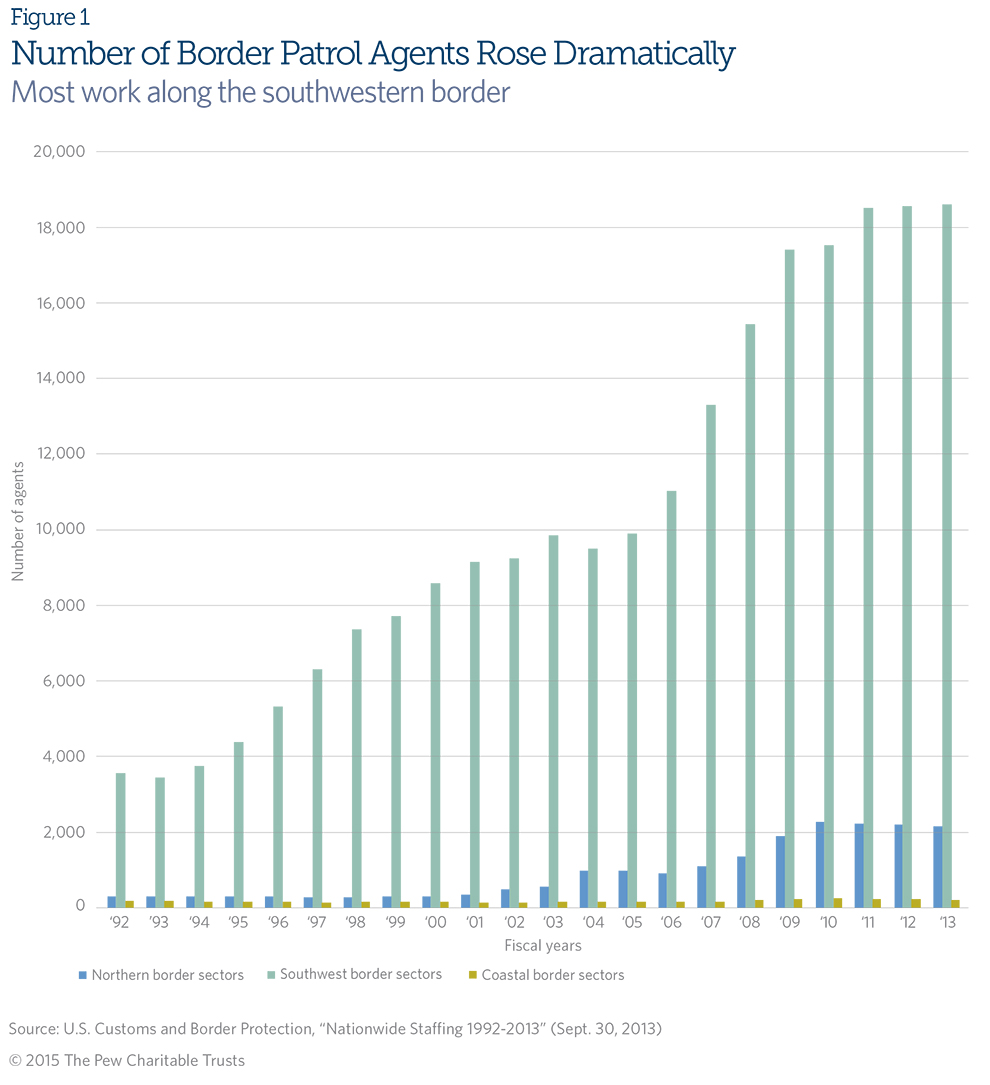 The Department of Defense plays a supporting role in border security, funding the National Guard when it is deployed by the federal government to aid border patrol operations16 and providing additional security equipment.17 Members of the Guard can assist federal agents but do not have the authority to apprehend or arrest migrants. 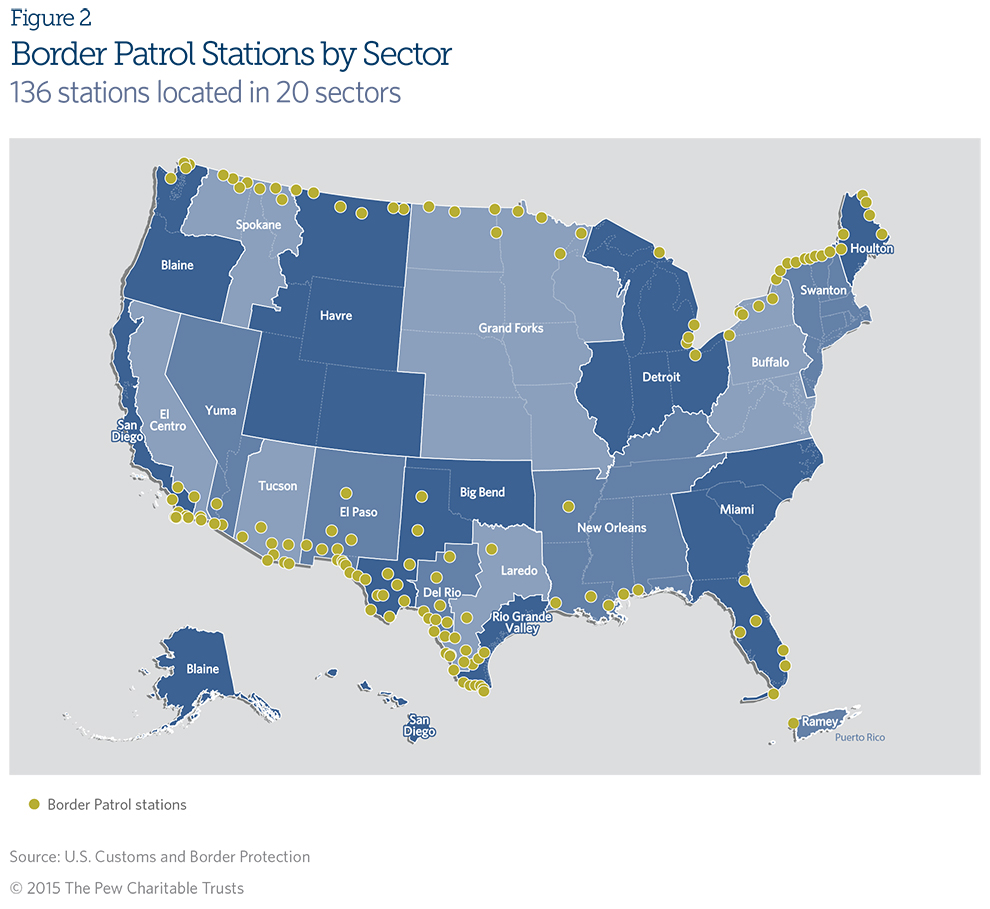 The Southwestern States and Border Enforcement

The four states along the U.S. border with Mexico—Arizona, California, New Mexico, and Texas— maintain a strong interest in all activities on the border, including immigration enforcement. Each has actively cooperated with the federal government and has devoted additional funding and resources to border enforcement. For example, in 2006, they all signed memorandums of agreement with the federal government to allow National Guard personnel to support federal efforts along the border as part of Operation Jump Start.*

Since 2005, Texas has supplemented federal border security efforts with state resources and funding. In October of that year, the governor announced a border security plan to support local law enforcement and provide additional resources to combat terrorism, illegal drug trafficking, and gangs.† Since then, a series of state and federally funded programs, including Operation Linebacker‡ and Operation Border Star,§ have been launched to deter illegal immigration, combat border crime, and coordinate federal, state, and local law enforcement efforts. In July 2014, the governor of Texas ordered 1,000 National Guard troops to the border in response to the influx of unaccompanied children attempting to cross into the United States.¶

In 2010, the governor of Arizona announced a border security plan that included $10 million of discretionary federal stimulus grant money to support local law enforcement.** The plan included National Guard reconnaissance, aerial patrolling, and military exercises, as well as increased support for local law enforcement and enhanced cooperation with federal agencies. In 2011, the governor signed a law allowing the state to build a fence along the border on private, state, or federal property.†† 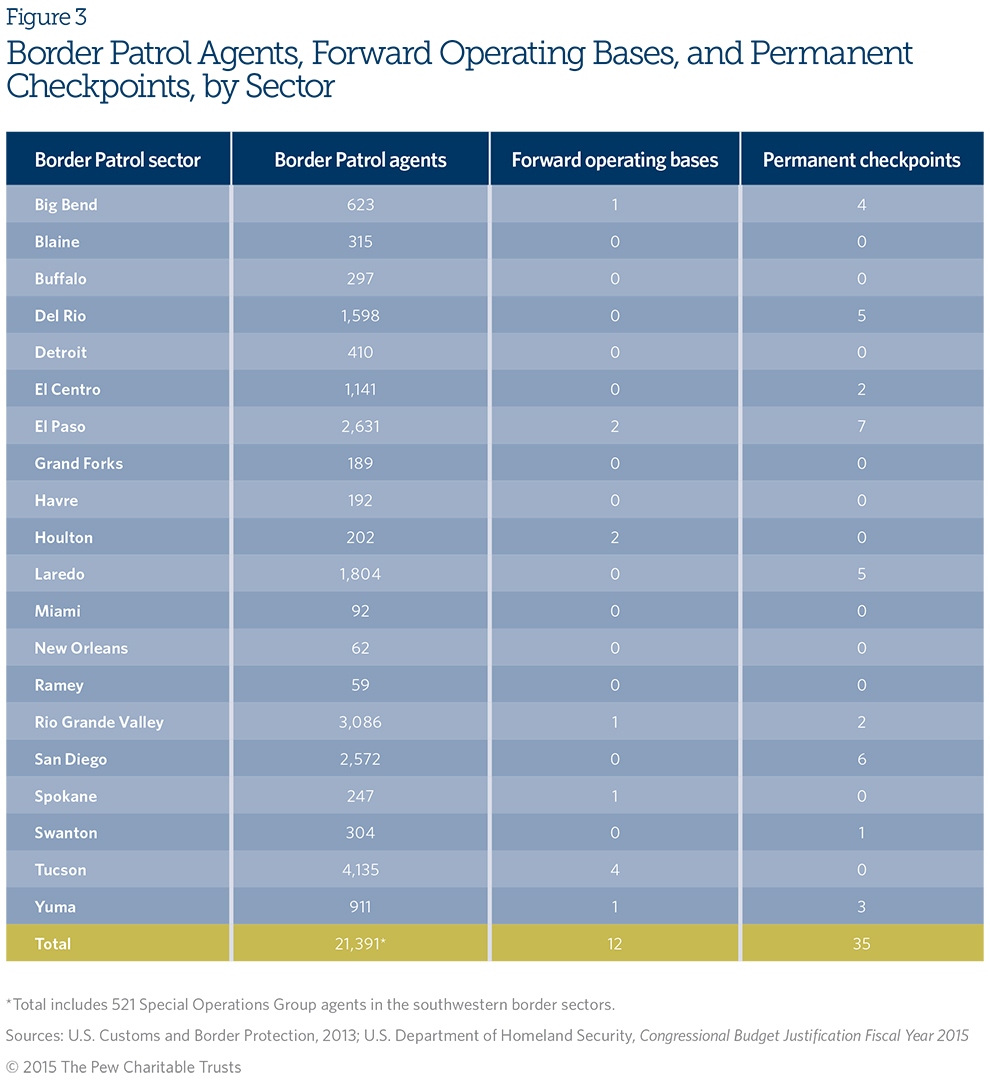 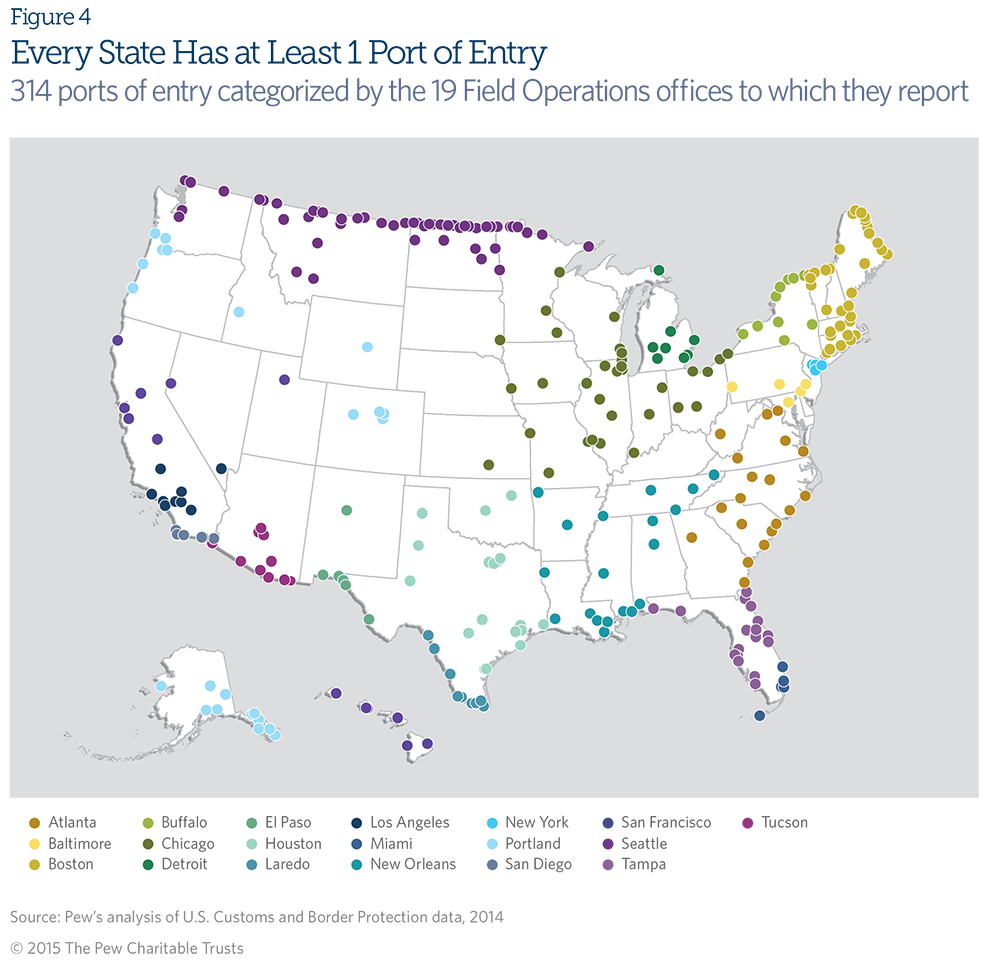 Examples of collaboration along the border

Federal border security agencies often partner with other federal entities, as well as with states and localities, to enhance information sharing and provide immigration enforcement officers at the border. There is no complete listing of these joint programs and partnerships,26 but among the examples:

Infrastructure and Equipment Along the Border

The Western Hemisphere Travel Initiative, part of the Intelligence Reform and Terrorism Prevention Act of 2004, was fully implemented in 2009 and requires U.S. citizens entering or exiting the country through the U.S.-Canada border to present passports, passport cards, or what are known as Trusted Traveler Program cards. Previously, they could simply declare their citizenship verbally. As part of the initiative, state driver’s licenses can be used to cross the border if they meet the law’s security requirements. Among those are vicinity radio frequency identification capability, which allows for authorized readers to receive certain information from a distance via a wireless device or tag.* As of December 2014, Michigan, Washington, Vermont, and New York issued licenses that meet the requirements of the program.†

Federal Funding for the States

Operation Stonegarden is a federal grant program operated under the Federal Emergency Management Agency, part of the Department of Homeland Security. In fiscal 2014, the federal government allocated $55 million for Operation Stonegarden to provide state, local, and tribal law enforcement agencies with funding to enhance border security operations. For example, Texas’ Hidalgo County, which shares a long land border with Mexico, received $3.3 million in 2014 for policing activities.*

Immigration enforcement activities at the nation’s borders and ports of entry are conducted with offices, personnel, and infrastructure spread throughout the entire United States, not just at the physical borders. Although there are specific examples of information and intelligence sharing and security partnerships among federal agencies and state and local law enforcement, no standardized, nationwide programs exist. The examples of cooperation tend to be clustered along the states that share the land border with Mexico and Canada. Policymakers at all levels of government should be aware that federal operations, personnel, and resources for border enforcement extend beyond the border and may provide opportunities for new forms of collaboration.

The immigration and the states project team would like to thank Theresa Cardinal Brown, director of immigration policy at the Bipartisan Policy Center, and Marc Rosenblum, deputy director of the U.S. Immigration Policy Program at the Migration Policy Institute, for their assistance with this brief. Although they have reviewed it, neither they nor their organizations necessarily endorse its findings or conclusions.