Mapping Public Benefits for Immigrants in the States

The federal government and the states play critical roles in providing public benefits to immigrants. In some cases, those who meet all eligibility requirements can receive assistance through federal public benefits programs. States also manage an array of programs that may be available to certain immigrants.

This brief focuses on five major means-tested public benefits programs—nonemergency Medicaid, the Children’s Health Insurance Program, Temporary Assistance for Needy Families, the Supplemental Nutrition Assistance Program, and Supplemental Security Income—each of which has its own rules for determining eligibility and benefits. The 1996 Personal Responsibility and Work Opportunity Reconciliation Act, commonly known as welfare reform, restricted federal benefits for many legal immigrants. That shift left states with the option to fill the gap and provide state-funded benefits programs for legal immigrants who became ineligible for federal programs.

Various approaches to providing assistance to immigrants have created a complex landscape in which the benefits available differ from state to state. In recent years, states have legislated a number of immigrant health and benefits issues. Some examples of these include introducing citizenship requirements for health care and public benefit eligibility and taking additional steps to further ensure that only those eligible are granted benefits.1 States are likely to continue to explore this area and make decisions that affect immigrant communities, as well as state budgets and economies.

The following maps and analyses highlight the layers of federal and state government programs involved in providing public benefits to immigrants, and explore the choices that states have made in response to options in federal law. This report is not meant to be an exhaustive list of benefits and programs available to immigrants. Furthermore, though the brief points out the existence of such programs across the country, it does not speak to their specific scope or eligibility requirements. Wide variation exists across the states in terms of who is eligible and how the programs are administered.

This brief is intended to inform policymakers about the role different levels of government play in providing certain public benefits to immigrants. The Pew Charitable Trusts takes no position on federal, state, or local immigration-related laws or policies.

These programs are provided in all states except Arizona, where CHIP was recently terminated.7 SNAP and SSI are fully funded by the federal government, while Medicaid, CHIP, and TANF require states to furnish a portion of the funding.

The Personal Responsibility and Work Opportunity Reconciliation Act of 1996, the welfare reform law, limited access to federal public benefits programs for legal immigrants. It left states with crucial roles in shaping the benefits delivery system, giving them the authority to establish—for certain legal immigrants—state-funded programs to replace federal benefits, and to set requirements for TANF and Medicaid eligibility for other specified immigrants.8

In addition to creating two categories, welfare reform instituted a five-year waiting period, meaning most qualified immigrants will be eligible to apply for means-tested benefits only after they have been in the United States for five or more years as a “qualified” immigrant. Humanitarian immigrants and veterans or members of the military are exempt from this waiting period. All qualified immigrants, just like U.S. citizens, are subject to other eligibility requirements for federal programs, such as income level, family composition, and work history, depending on the program. Unauthorized immigrants have historically been ineligible for most federal public benefits programs.

“Lawfully present” immigrants—a category that includes “qualified” immigrants as well as certain other immigrants who have permission to live in the U.S.11—are subject to the mandate to have health insurance or pay a penalty. They may purchase insurance on exchanges—the online marketplaces for health insurance—and may qualify for tax credits or cost-sharing subsidies.12 Unauthorized immigrants are not subject to the mandate, cannot purchase insurance on the exchanges, and do not qualify for related tax credits or subsidies.

States cannot exempt lawfully present immigrants from the mandate or the tax penalties, change the eligibility requirements for tax credits or subsidies, or deny them the ability to purchase insurance on the exchange. States may be able to create their own supplemental state exchanges where unauthorized immigrants can purchase health insurance, separate and apart from the system governed by the ACA.13

New roles for the states: Programs funded only by states

Welfare reform, while defining which immigrants qualified for means-tested benefits and when, also allowed states to establish their own programs, using their own funds, to expand benefits more broadly.14 Many states created new programs to extend coverage to immigrants ineligible for federal public benefits. Such programs included those for qualified legal immigrants during the five-year waiting period. Other states created programs they funded themselves or expanded existing programs to include immigrants ineligible for federal aid.15 Unlike the five major federal benefits programs that are either fully or partially funded by the federal government, these state specific programs are funded only by state dollars with eligibility determined by each individual state.

After enactment of the welfare reform law in 1996, the federal government continued to modify the eligibility requirements for certain programs. For example, the Farm Security and Rural Investment Act extended SNAP eligibility in 2002 to qualified immigrant children without a waiting period.16 In 2002 and 2009, states also were granted options for expanding health coverage to certain immigrants using Medicaid and CHIP, which are jointly funded by states and the federal government. These include two major federal-state health care options:

Forty states and the District of Columbia either supplement federal benefits programs with programs funded only by the states, or take the Unborn Child or CHIPRA options that expand the federal programs with state and federal matching funds. Twenty states and the District have created or expanded state-only funded programs and taken at least one of the options. Only 10 states have neither provided their own programs for immigrants nor taken up one of the federal-state options to expand eligibility. The appendix provides additional information regarding which states have created state-only funded programs and taken federal-state options for immigrants.

State-funded programs vary considerably in regard to their eligibility requirements, which immigrants they serve, and what benefits immigrants can receive. For example, some states may extend state-funded benefits to all immigrants ineligible for federal assistance, while others make them available to smaller, specific groups of immigrants.

States that elect to take the federal Unborn Child and CHIPRA options also vary in terms of which immigrants are eligible for these benefits. Figure 1 shows which states provide some sort of supplemental benefits by either taking the federal Unborn Child21 or CHIPRA22 options or providing benefits with state funding to some immigrants ineligible for the major federal programs.

State and local benefit-granting agencies can - and in some cases must - verify an immigrant’s status and eligibility for public benefits with the Systematic Alien Verification for Entitlements (SAVE) program.23 SAVE is an online system operated by U.S. Citizenship and Immigration Services to verify that immigration information and documentation presented when applying for benefits match federal immigration records.

Government agencies submit information electronically to the SAVE system, which either confirms the applicant’s immigration status or asks for more details before making a final determination. SAVE does not indicate whether the individual is eligible for a benefit. It simply verifies that the immigration status matches the documentation presented to the benefit-granting agency. The agency then makes the final determination as to whether the immigrant meets all eligibility criteria for the benefit sought.

Federal, state, and local government agencies may use SAVE if the agency “provides a public benefit or license, or is otherwise allowed by law to engage in an activity where the verification of immigration status is appropriate.” Government agencies must apply to U.S. Citizenship and Immigration Services to employ SAVE and must sign a Memorandum of Understanding with the agency.24 Private companies and individuals cannot use SAVE. Government agencies must pay a transaction fee; the initial amount is 50 cents per electronic query or $2 if a paper form is submitted.25 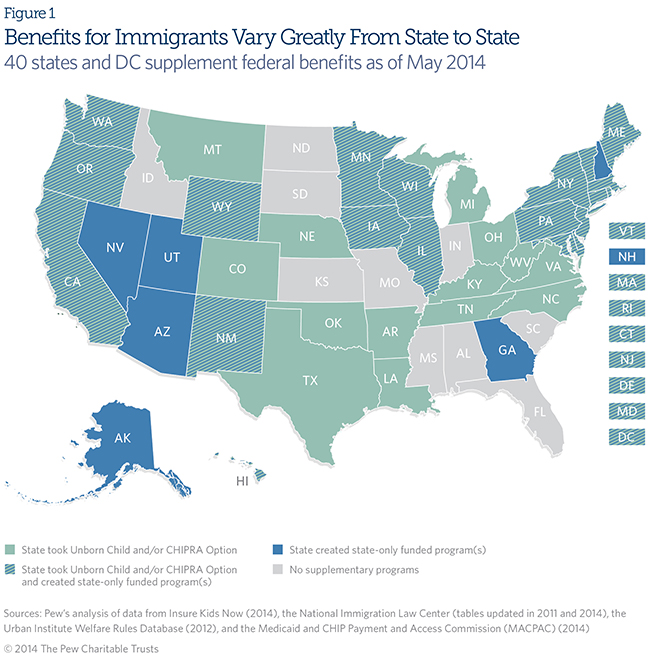 Twenty-six states and the District supplement federal benefits programs with state-only funded programs for immigrants, as indicated by blue and cross-hatching in Figure 1.26 The remaining 24 states do not supplement federal benefits programs with state-only funded programs (indicated by green and gray in Figure 1). Of the jurisdictions with such programs, TANF replacement programs that provide help to low-income families are the most widely available; 23 states offer that benefit.27 Ten states and the District offer some kind of health benefits, the next largest category. (See Figure 2.)28 The various combinations of state-only funded assistance for families, health coverage, food assistance, and assistance for seniors and persons with disabilities29 offered in 26 states and the District are shown in Figure 3.

Examples of state-funded assistance for families and food assistance programs are detailed below:

State-only funded programs for health coverage vary a great deal in terms of eligibility and types of services provided. Alaska’s supplemental health coverage is limited to individuals with specific conditions such as cancer and seizure disorders, while health coverage for immigrants in Massachusetts, on the other hand, extends to all children regardless of immigration status.34 Other state-funded health programs include the following. 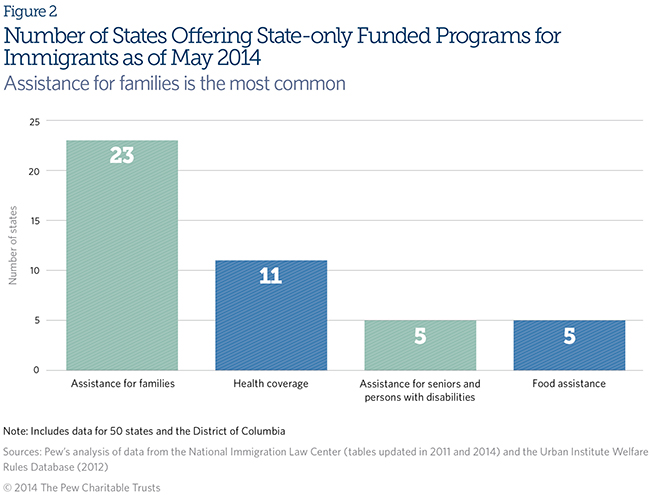 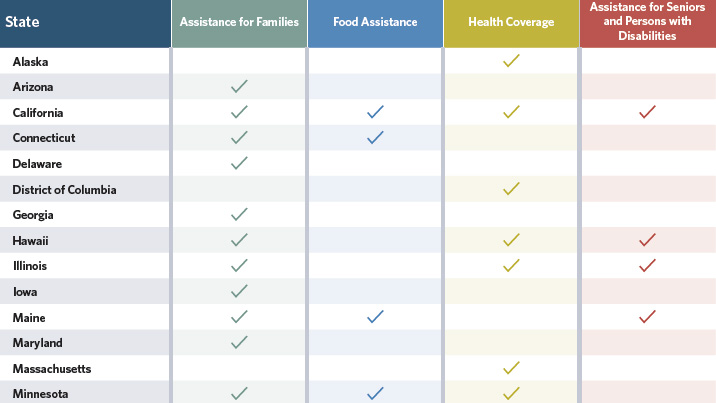 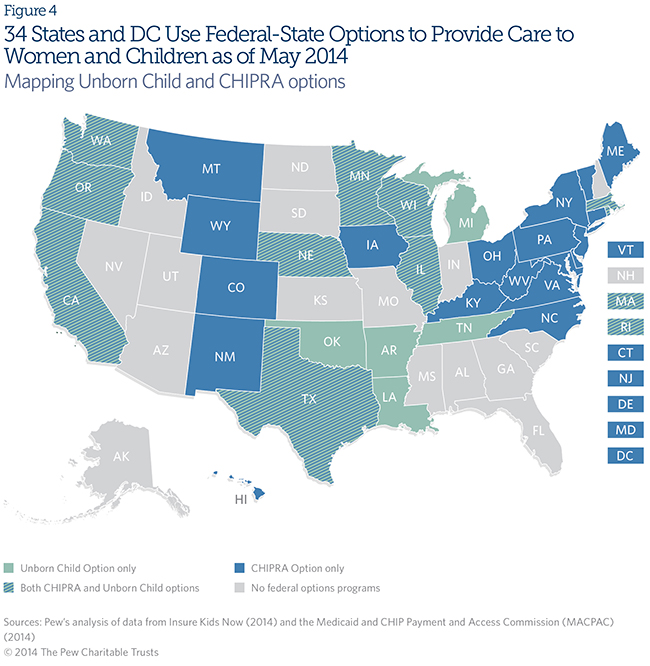 The delivery structure of public benefits programs is not only complicated at the federal level, but many states have also chosen to expand access to federal benefits or to provide state-only funded benefits to some immigrants ineligible for federal assistance. This web of programs with varying eligibility rules illustrates the overlapping roles of the federal government and the states in providing services for the nation’s immigrants. Although the federal government maintains authority over admitting immigrants into the country and their eligibility for federal benefits programs, states have choices in making certain benefits available to their immigrant residents. The conversation about immigrant eligibility for a wide range of federal, state, and local public benefits is likely to continue across the United States. Policymakers need to be aware of the complexities in the parts each level of government can play in designing programs for immigrants and take these into consideration when making decisions about public benefits.

This brief is intended to inform policymakers about the role different levels of government play in providing certain public benefits to immigrants. The Pew Charitable Trusts takes no position on federal, state, or local immigration-related laws or policies.