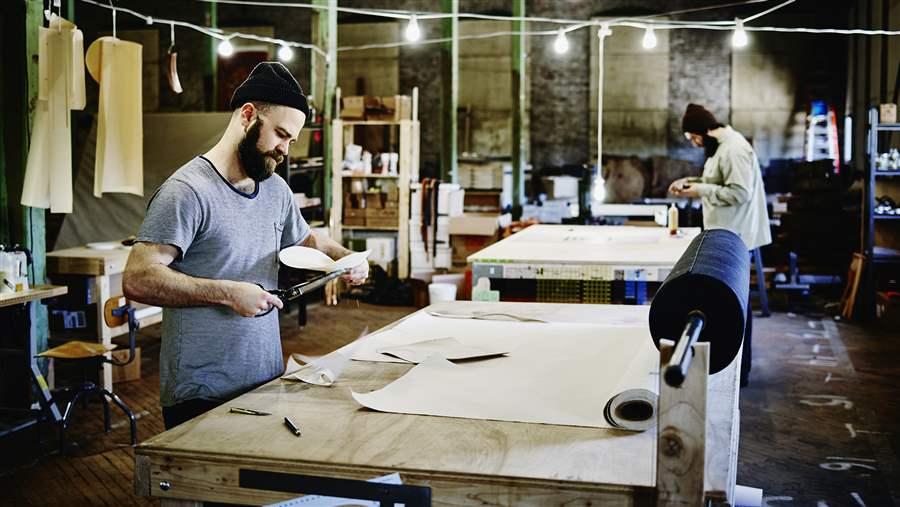 Under many proposals, employers are responsible for enrolling their workers in the state retirement program.

Most Americans are not saving enough to pay for their retirement. The ability of employees to contribute directly from their paychecks and the use of features such as automatic enrollment make the workplace an effective place to encourage saving. These employer-sponsored plans have become the primary vehicle for accumulating the vast majority of private retirement funds. However, most workers do not or cannot participate in a retirement savings plan through their employer, and less than 10 percent of all workers contribute to a plan outside of work.

The failure to save enough—or save at all—has an impact on workers later in life and on all taxpayers. Since 2012, half of the states have introduced legislation to study or establish state-sponsored retirement savings programs for workers at private sector or nonprofit employers without plans. This fact sheet, one of a series, summarizes how policy options could affect employers.

As state policymakers consider legislative proposals to help private sector workers save for retirement, the impact of these plans on employers will be determined in part by decisions they make on a number of factors. Among those are what size employers would be included, what responsibilities employers would have for program management, how many workers in total would likely be covered by the program, and how the program might affect the broader private retirement plan market. In some cases, policymakers designing state-sponsored retirement programs will need to balance competing objectives as they attempt to create systems that foster employee savings while ensuring that burdens borne by employers are not heavy.

Some states have considered legislation to create state-sponsored retirement programs that would allow employers to choose whether to participate, while others would require employers to enroll their employees. Illinois and Connecticut, for example, have mandated that employers with a minimum number of employees take part in automatic-enrollment individual retirement accounts (IRAs) and in both cases impose penalties on businesses that do not participate. Washington state’s marketplace, on the other hand, is a purely voluntary system. Policymakers eager to minimize employer burdens might find a voluntary program appealing, but they also should factor in how such an approach might affect the broader goal of increasing workplace access to savings opportunities.

Nationally, 58 percent of full-time, full-year private sector workers have access to a retirement plan at their workplace. That figure drops to just 22 percent at firms with fewer than 10 full-time, full-year employees. The disparity suggests that boosting access could prove more difficult using voluntary programs, such as state-sponsored marketplaces, while participation might not be large enough to generate significantly greater coverage or for programs to be self-sustaining in the long term.

Employer size: Where to set the employee number threshold

Another fundamental question facing policymakers is which employers will be subject to a program. The proposals for marketplaces in Washington state and New Jersey, for example, exclude larger employers, while the Illinois Secure Choice Savings Program exempts smaller ones. Setting a maximum number of employees for firms to be eligible for a marketplace keeps larger employers that could likely manage the setup and administration of a plan on their own out of the program. Setting a minimum, such as in the Secure Choice program, typically reflects a fear that the costs of participation could harm the profitability or viability of the smallest firms.

Small employers are more vulnerable than larger ones. According to the U.S. Census Bureau, 14 percent of businesses with one to four employees did not survive over 2011-12, double the 6 to 7 percent exit rate for larger concerns. In addition, policymakers need to consider whether part-time or contract workers would count toward a threshold.

Where the threshold is set will affect the total number of workers covered in a state, in large part because most full-time employees without plans work for smaller businesses. The Illinois program currently requires employers with at least 25 workers to participate. If that threshold were set at five instead, the program would cover up to 700,000 additional workers and have a much larger impact on coverage levels in the state.

Under many proposals, employers are responsible for enrolling their workers in the state program. Employers often raise concerns about the length and frequency of enrollment periods because they must provide communication materials and deal with changes sought by employees. Business owners also are often the point of contact for benefits-related questions, so they can expect employees to seek information on topics such as contributions, investments, and distributions. A successful program requires a workable balance between the efficiency of a workplace-based program and the burdens placed on employers. Those looking to reduce those burdens can consider a fixed annual enrollment window—instead of enrolling new employees as they come on board—but they should realize that this comes at the cost of excluding some employees for up to a year.

In general, federal rules state that if a state-sponsored retirement program requires employer participation, employers cannot be held liable for employee decisions about whether to participate. Liability is also typically eliminated for investment performance, plan design, and the amount of retirement income paid to participants. That is because employers in state-sponsored programs that automatically deduct money from employee paychecks have no control over such matters.

However, an important consideration is whether to assess sanctions for employers that do not perform their duties under the program. For example, Connecticut’s study legislation envisions allowing the state to act against employers that do not meet their obligations. Under the Illinois law, employers face penalties if they fail to enroll their workers in the state program. In specific situations, other state laws, such as those dealing with wage theft, also may provide protections for workers.

Competitiveness of the plan: Limiting market disruption and ensuring sustainability

A final question is whether implementation of a program might encourage employers that already offer retirement plans to drop them to participate in the state program. A switch to a state plan from an employer-sponsored plan governed by the Employee Retirement Income Security Act (ERISA), the federal law that governs pensions, could result in reduced benefits for employees because contribution limits are lower in these state plans and employers cannot contribute to these accounts. Employers can contribute to ERISA plans such as 401(k)s.

Conversely, an important consideration is the appeal of proposed state plans to private sector employers that do not currently have them. If employers must offer coverage, how many that are eligible to join a state-sponsored plan would instead choose to go to the private market and set up their own? Lower-than-expected enrollment numbers could hurt the ability of a state-sponsored plan to cover its costs and have implications for its long-term viability.

Pew’s full analysis of state legislation regarding private sector retirement savings can be found in How States Are Working to Address the Retirement Savings Challenge: An Analysis of State-Sponsored Initiatives to Help Private Sector Workers Save. The report analyzed efforts under way or under consideration in 25 states. It found that the states’ objectives are consistent: Increase retirement savings and reduce poverty among retirees to avoid social assistance spending that strains state budgets, ensure that reforms are implemented successfully, impose minimal burdens on employers, build cost-effective and sustainable programs, and protect employee retirement savings.

Given the range of possible approaches, policymakers will likely have to identify and set priorities that balance competing risks and trade-offs. The report discusses various approaches in more detail and highlights the implications of competing policy goals. It is essential that states balance these objectives, taking into consideration the specific economic and demographic characteristics of the workers who could participate in these plans. With careful decision-making, states can significantly improve the retirement security of many working Americans while minimizing burdens on employers and costs to taxpayers.