These data have been updated. To see the most recent data and analysis, click here.

As federal policymakers work to finalize a budget agreement in the face of another rapidly approaching deadline, it is important that they remember the significance of federal spending decisions to state budgets and economies. States get roughly one-third of their revenue from the federal government, funding that pays for health care, schools, roads, public safety, and a range of other programs. (See “Federal Grants as Share of States’ Budgets Decline After Historic High.”) But federal support for these programs has varied significantly, with grants for health care growing 55 percent in real terms from 2008 to 2015, while almost all other areas saw a decrease. 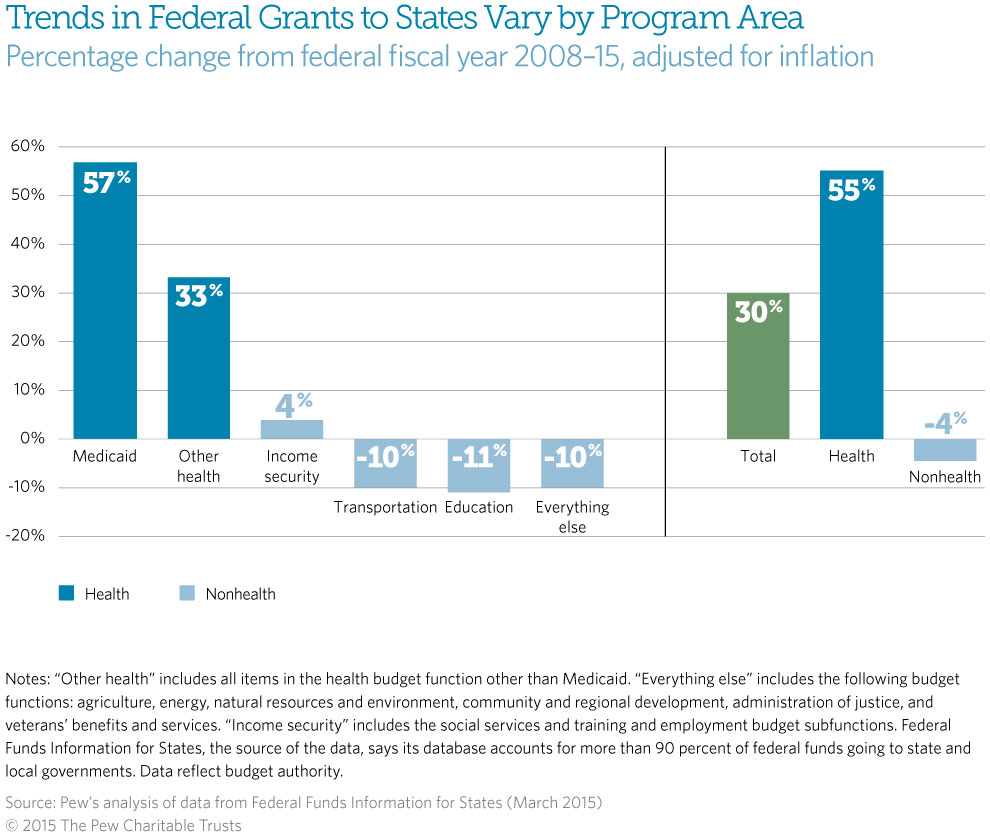 Over the same period, federal policies helped shape a divergent trend in health vs. nonhealth grants. Medicaid, which increased by 57 percent since 2008, has been the main driver not only of the rise in federal health grants but also of all federal funds to states. (See “Medicaid Makes Up Nearly Two-Thirds of Federal Grants to States.”) A provision in the Patient Protection and Affordable Care Act expanded the program to cover previously ineligible low-income adults with the federal government funding 100 percent of the costs through 2016, then gradually dropping to 90 percent by 2020. This change went into effect Jan. 1, 2014, and as of August 2015, 30 states plus the District of Columbia had chosen to participate. Meanwhile, the nonhealth category decreased 4 percent during this seven-year period. This decline was driven in part by statutory limits on discretionary spending set by the Budget Control Act of 2011, as amended, which capped expenditures on almost all nonhealth programs, such as those for education, but did not apply to Medicaid.

Nearly all states operate under balanced budget requirements and would be directly affected by increases or decreases in federal grants. Fluctuations in federal funding could present state policymakers with difficult choices regarding whether to adjust their own spending in response.

In addition, changes to federal spending other than direct grants can also affect state budgets. Increases or decreases in federal defense and nondefense spending on contracts and salaries and wages can affect states’ economic activity and have an indirect impact on state revenue. (See “Federal Spending in the States: 2004 to 2013.”)