This data was updated in March 2019. Please see "Health Care Has Dominated Federal Spending Choices for More Than a Decade.”

States get roughly one-third of their revenue from the federal government—funding that pays for health care, schools, roads, public safety, and a range of other programs. Federal grants to states are about 40 percent higher, after adjusting for inflation, than they were in 2008 when the recession began. But federal support for this range of programs has varied significantly, with grants for health care growing 72 percent in real terms from 2008-17, while almost all other areas saw a decrease. 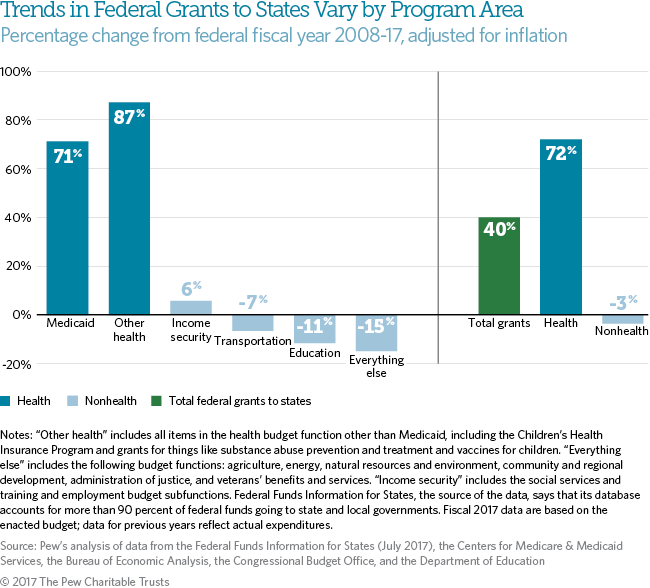 One factor contributing to the rise in federal health grants is the Medicaid expansion under the Affordable Care Act. Medicaid funds flowing to states have grown sharply since fiscal year 2015, the first full year of implementation for most states that expanded their Medicaid programs, according to the Centers for Medicare & Medicaid Services.

Federal policies over the past few years have helped shape a divergent trend in health versus nonhealth grants. Medicaid grants have increased by 71 percent since 2008 and have been the main driver of the rise in federal health grants, and also of all federal funds to states. (See "Two-Thirds of Federal Grants to States Are for Medicaid.") A provision in the Affordable Care Act allowed states to expand the program to cover some previously ineligible low-income adults, with the federal government funding 100 percent of the costs through 2016, then gradually dropping to 90 percent by 2020. This change went into effect Jan. 1, 2014, and as of November 2017, 32 states and the District of Columbia had chosen to participate. Meanwhile, the nonhealth category decreased 3 percent during this 10-year period. This decline was driven in part by statutory limits on discretionary spending set by the Budget Control Act of 2011, as amended, which capped expenditures on almost all nonhealth programs, such as education.