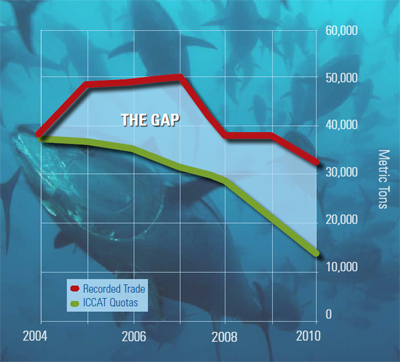 For many years, the Mediterranean bluefin tuna fishery was considered mismanaged and out of control. In 2008, an independent review of the International Commission for the Conservation of Atlantic Tunas (ICCAT), the body that manages the fishery, famously called its Atlantic bluefin tuna policies a “travesty of fisheries management.” For more than a decade, the Mediterranean was heavily fished by an oversized industrial purse-seine fleet, flouting ICCAT's catch limits and compromising the sustainability of the fishery and the livelihoods of traditional, smaller-scale bluefin tuna fishermen operating legally. According to ICCAT's own scientists, catch limits “were not respected and largely ineffective in controlling overall catch.

A previously released analysis examined the international trade in Mediterranean bluefin tuna from 1998 to 2008 and found significant gaps between the catch limits set by ICCAT and the reported amount of eastern Atlantic and Mediterranean bluefin tuna traded on global markets each year. Due in part to this analysis and other reports, which exposed the problems plaguing the Mediterranean fishery, and after years of campaigning by environmental groups, bluefin tuna quotas have decreased since 2008. In 2010, for the first time, the quota was within the range of scientific advice, although it was not sufficiently precautionary, given the fishery's history. Improved compliance measures have also been adopted. In 2008, ICCAT countries agreed to a paper-based bluefin catch documentation system, meant to more accurately record the amount of bluefin tuna caught and traded and, in theory, help officials ensure the legality of bluefin tuna entering the market.

This updated analysis includes 2009 and 2010 and seeks to determine whether, despite reduced quotas and improved compliance measures since 2008, significant gaps still exist in the amount of bluefin tuna caught, reported and trade, and the quota set by ICCAT.