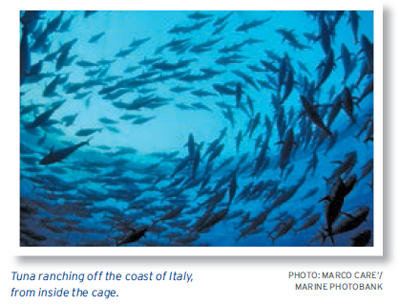 According to recent stock assessments, Atlantic bluefin tuna populations are at near-historic lows, and illegal, unreported and unregulated (IUU) fishing is hindering the recovery of this highly valuable species. Recognizing the threat that illegal fishing poses to the conservation and management of bluefin tuna, the International Commission for the Conservation of Atlantic Tunas (ICCAT) mandated in 2007 that all its members implement a paper-based catch documentation system. The bluefin catch document (BCD) tracks fish as they are caught, transported, farmed, and traded on the world market. Although the paper BCD was a necessary first step in addressing the impacts of IUU fishing, the system needs to be strengthened in order to better detect fraud and deter illegal fishing and trade.

The Atlantic bluefin tuna supply chain is long and complicated, and the many steps along the way provide the opportunity for fraud and misreporting. In the Mediterranean Sea, the majority of bluefin tuna are caught by purse-seiners that target large aggregations of adult fish. The catch is then towed to floating ranching pens, where the fish are kept for up to two years while they are fattened to increase their market value. Using the technology in place today, it is very difficult to verify the exact number and the weight of fish transferred to these pens, making them an ideal place to launder bluefin caught in excess of the agreed quota. This year, for the first time, ICCAT required pen operators to monitor and submit underwater video of all of these transfers. Countries are also required to begin testing stereoscopic video systems, which use two cameras to produce a more precise estimate of the number and weight of transferred bluefin. ICCAT should review countries' success in using these stereoscopic systems and, if they are shown to be helpful, require that they be officially adopted by all ranches and purse-seining operations. Underwater video is, however, just one additional measure that can assist with monitoring. Other tools can help close the loopholes in this fishery.

Opportunities for fraud are not limited to the ranching industry. Without real-time reporting and verification of catch information, any vessels that exceed their annual quotas can more easily sell their fish to other boats, hiding the illegal origin of the catch. Undeclared catches can also be landed locally or transferred to transshipment vessels or other means of transportation that then deliver the undocumented fish to foreign ports.

Regardless of where or how it is caught, a bluefin tuna can change hands many times before it reaches the market. Each time it is imported, exported, or re-exported, there is an opportunity for illegal catch to be mixed in with legal catch, weights and numbers to be misreported, and origin information to be changed. To close these loopholes, ICCAT must improve the existing bluefin catch documentation system by adding an electronic reporting requirement, reducing the chance for fraud, inaccurate reporting, and delays in validation.

ICCAT mandated the use of a BCD system in 2007 after widespread reports of large quota overages and continued IUU fishing. The system was designed to assign a unique ID number and track each catch of fish as it moved through the supply chain, allowing customs officials, enforcement officers and buyers to verify the tuna's origin and legality. Information from the BCD was also to be used by scientists as they determined the status of the populations.

Unfortunately, the paper-based BCD has failed to fully address the problems of IUU fishing. Printed documents can easily be altered or forged, allowing illegally caught fish to enter the market. In July, the Italian coast guard revealed a widespread, well-established trafficking operation of falsifying and avoiding bluefin catch documents. Paper-based documents also slow data collection and reporting, inhibiting effective management of the species. As of November 2010, crucial information was still missing from ICCAT's BCD database for 75 percent of the purse-seine catches from 2008 and 2009.

ICCAT has started to address the inherent problems in the BCD system. In 2010, recognizing the need for an electronic system, the commission formed a working group to design, develop, and implement an eBCD in time for the 2012 bluefin tuna fishing season. ICCAT members must continue to support these efforts and secure funding for a comprehensive electronic documentation system that reduces fraud, increases compliance, and allows for more accurate and timely reporting of catch data.

The Pew Environment Group calls on ICCAT to adopt a system that includes, at a minimum: