Most people associate the word “felony” with serious crimes, such as murder and assault. But in 12 states, a person can be charged with a felony for stealing an $800 bicycle because these states have felony theft thresholds—the dollar value of stolen money or goods that can result in a felony charge rather than a misdemeanor—of $750 or less. And if they result in conviction, those charges can have wide-ranging and long-lasting consequences, including an inability to obtain a job, lack of access to public housing and welfare benefits, and severed social bonds with family and friends.

Felony threshold amounts—and therefore the risk of these adverse outcomes—vary considerably across the country, from $2,500 in Texas to $200 in New Jersey. (See Figure 1.) But what accounts for these discrepancies? Several states set their thresholds years or even decades ago and have not updated them regularly, if at all. In that time, inflation has effectively increased penalties.

Some states have recognized the problem and acted to safely raise felony thresholds: Since 2000, at least 39 states have done so, including nine states that did it twice. These changes reflect not only the gradual impact of inflation, but also allowed states to focus corrections resources on more serious offenses and made punishments more proportionate to theft crimes. 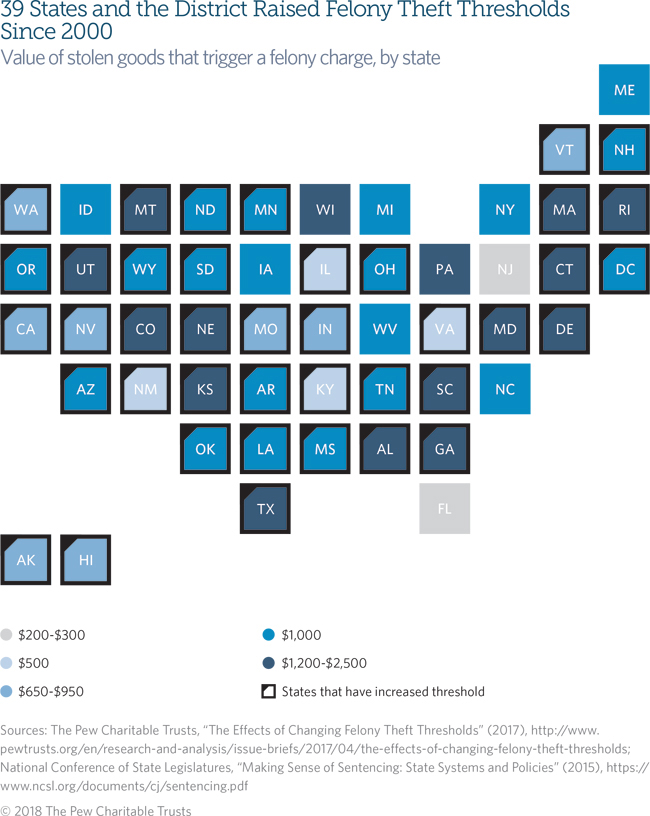 Among the states that have not increased their thresholds since 2000, Florida and New Jersey are notable for their extremely low levels of $200 to $300. Florida has not raised its threshold since 1986. At the other end of the spectrum, Alaska in 2016 became the only state to require that the threshold value be adjusted every five years to account for inflation.

In April 2017, research by The Pew Charitable Trusts found that, in the 30 states that raised their thresholds between 2000 and 2012, downward trends in property crime or larceny rates, which began in the early 1990s, continued without interruption. These states reported roughly the same average decrease in crime as the 20 states that did not change their theft laws, and the threshold amounts were not correlated with property crime or larceny rates.

To expand on that study and explore a wider range of outcomes, Pew analyzed South Carolina’s 2010 felony theft threshold increase from $1,000 to $2,000. The evaluation reinforced the earlier national findings, showing that since the law was implemented, the state’s property crime rate has continued to fall, dropping 15 percent in the three years after reform.

The South Carolina analysis also examined a common concern among opponents of raising thresholds: that increases will encourage people to steal items of higher value. Pew reviewed data on the value of goods reported stolen in the state and found that it did not change, remaining about $200 on average. This finding suggests that the higher threshold affected neither the total rate nor the value of the average theft.

South Carolina policymakers intended the higher threshold to divert people convicted of lower-level offenses away from prison, so Pew also investigated the impact of the change on the state’s prison population. The study determined that prison admissions for theft offenses declined by 15 percent, and sentence lengths fell a similarly significant 13.6 percent, or 231 days. Ultimately, Pew’s two studies came to the same conclusion: States can safely raise felony thresholds for theft offenses without disrupting downward trends in property crime.

These findings add to an already large body of research demonstrating that for many people, longer prison terms offer a poor return on public safety investments. The findings can also help state policymakers who want to prioritize costly prison space for more serious offenses and steer people away from the consequences of a felony conviction.

Maintaining the decline in property crime defies a simple solution and requires a focus on the specific theft offense and the individuals involved. But evidence indicates that, given the long-established relationship between drug misuse and crime, drug treatment can play a key role. Research shows that addiction interventions and substance use treatment can reduce criminal activity, specifically property crime, and associated criminal justice costs by reducing drug misuse. This, in turn, provides a potentially effective and cost-effective alternative to increased incarceration.

In the meantime, raising the felony threshold offers a simple way for more states to ensure that when it comes to theft, the punishment better matches the crime.

Jake Horowitz is director of research and policy and Monica Fuhrmann is a senior research associate with The Pew Charitable Trusts' public safety performance project.