In 2010, South Carolina enacted comprehensive sentencing reforms that included a provision to increase the state’s felony theft threshold—the dollar value of stolen money or goods above which prosecutors may charge a person with a felony rather than a misdemeanor—and revise penalties for certain property crimes. The state is one of 37 that changed their theft thresholds between 2000 and 2016. (See Figure 1.)

Felony offenses are typically punishable by a year or more in state prison, while misdemeanors can result in up to a year in a local jail,1 so South Carolina’s changes have the effect of prioritizing costly prison space for those convicted of more serious offenses. The new policy also represents an acknowledgment by lawmakers that inflation raises the value of stolen goods and therefore has an impact on the penalties imposed. For example, in a state with a $500 threshold, stealing a bicycle worth $250 in 1985 would have led to a misdemeanor charge, but today, because of inflation, that same bicycle would be worth $5752 and stealing it would result in a felony charge, potential prison time, and the diminished employment and housing prospects, occupational licensing restrictions, and other consequences that can accompany a felony conviction.3

In April 2017, The Pew Charitable Trusts published a study of 30 states that had raised their felony theft thresholds between 2000 and 2012 and found that the reforms did not interrupt downward trends in property crime or larceny rates. These states reported roughly the same average decrease in crime as the 20 states that had not changed their theft laws, and threshold amounts were not correlated with property crime or larceny rates.4

Now, Pew has undertaken an analysis of South Carolina’s change in an effort to expand on the national study by examining a broader range of outcomes, including the relationships among higher dollar thresholds, crime, and the value of stolen goods. The evaluation reinforced the earlier findings, determining that since the 2010 law was implemented—even as South Carolina has sent fewer people to prison for theft offenses, and for shorter terms—the state’s property crime rate has continued to fall. Pew also found that the value of items stolen did not change, alleviating concerns that a higher threshold would lead not only to more theft but also to targeted theft of more expensive goods. This brief delves into the findings of this research and demonstrates how South Carolina’s results provide further evidence that states can increase their felony theft thresholds without compromising public safety. 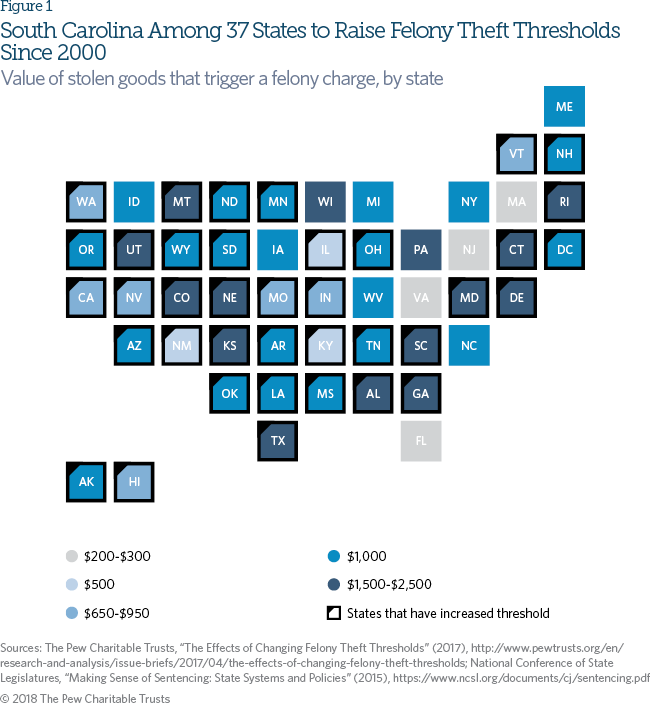 The Omnibus Crime Reduction and Sentencing Reform Act of 2010 was designed to prioritize prison space for people convicted of serious offenses and invest the savings from lower overall imprisonment into evidence-based practices to reduce recidivism.5 As part of this reform, South Carolina doubled its felony theft threshold to $2,000 for most property crimes—such as shoplifting and larceny—which are referred to in this report as property threshold crimes. (See Figure 2.) The change did not apply to all property offenses, such as financial transaction card theft and making false insurance statements, which have either no threshold or a different one. In addition to raising the felony theft threshold, state lawmakers also reduced some penalties for offenses involving theft of items exceeding $2,000. For example, the maximum sentence for theft of items valued at more than $5,000 was lowered from 10 years to five. 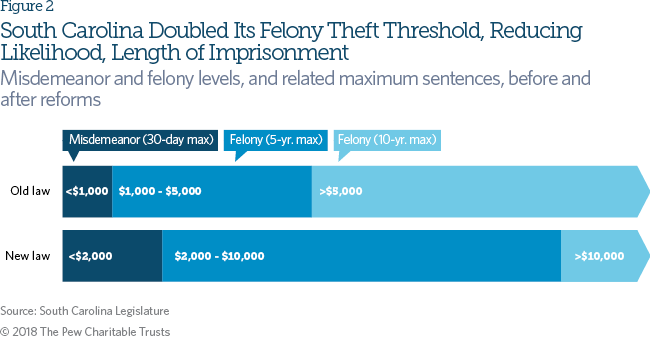 The 2010 law was based on the recommendations of the South Carolina Sentencing Reform Commission, a bipartisan group of lawmakers, judges, executive branch officials, and others that conducted a detailed review of the state’s correctional policies and practices with technical assistance from Pew and the Crime and Justice Institute at Community Resources for Justice. The review was completed as part of the Justice Reinvestment Initiative, a partnership between Pew and the Justice Department’s Bureau of Justice Assistance.

Impact of the change

To assess the effect of increasing the felony theft threshold in South Carolina, Pew set out to answer four questions:

No impact on overall property crime

The evaluation found that raising the felony theft threshold had no impact on the rate of crime reported to police in South Carolina.6 More specifically, the law did not interrupt nearly two decades of declines in larceny, burglary, motor vehicle theft, robbery, and other index crimes—those recorded by local police departments and reported to the FBI as part of the Uniform Crime Reporting Program.7 (See Figure 3.) In fact, within three years of the reform, larceny decreased 16 percent, burglary fell 10 percent, and motor vehicle theft dropped 26 percent; at the same time, property index crimes declined 15 percent overall. In addition, robbery, which the FBI considers a violent crime, decreased 35 percent.8 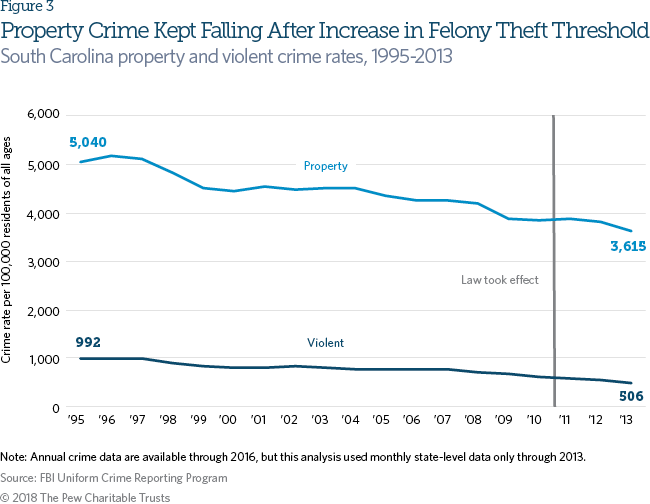 To take a deeper look at property crime trends, Pew analyzed arrest data from 2007 to 2013, dividing those years into two phases—pre-reform (Jan. 1, 2007, to June 1, 2010) and post-reform (June 2, 2010, to Dec. 31, 2013)— and calculating averages for both. During the post-reform period, total arrests for property threshold crimes declined by 1.8 percent. Specifically, arrests for larceny, the second-most-common theft offense after shoplifting, declined by a statistically significant 3.3 percent.9

In contrast, arrests for shoplifting rose 2.6 percent post-reform, but this increase appears to fit a regional pattern: South Carolina’s neighbors—Georgia, North Carolina, and Tennessee—also experienced 2 to 3 percent growth in shoplifting between 2009 and 2013.10 North Carolina and Tennessee did not change their felony theft thresholds during this period, and Georgia modified its threshold in 2012, which suggests that South Carolina’s shoplifting increase is probably not a consequence of the policy change.

Raising the felony theft threshold had no impact on the rate of crime reported to police in South Carolina.

Value of stolen items did not increase

Some critics suggested that higher thresholds could encourage theft of items of greater value. But Pew’s analysis found no evidence that this had occurred in South Carolina.11 In fact, the median value of stolen goods actually declined, after adjusting for inflation, from $211 before reform to $203 after,12 and it is still far below the modified threshold of $2,000. These findings are consistent with a body of research showing that most criminal acts involve very limited planning or thinking ahead, and that crime tends to be spontaneous and opportunistic.13

Although organized retail theft rings might adjust their behavior to take advantage of the higher threshold, the studied data do not indicate whether people arrested for or convicted of property threshold crimes are engaged in organized retail theft. However, if such crimes occurred to a significant degree in South Carolina, the median value of thefts pre- and post-reform would probably be closer to the threshold level.

The number of people sentenced to prison for property threshold crimes declined by 15 percent between the pre- and post-reform periods (2007 to 2010 and 2010 to 2013, respectively) in tandem with an overall drop in prison admissions. The decrease is consistent with the law’s intent—to divert from prison people who stole goods worth less than $2,000—and has advanced South Carolina policymakers’ goal of prioritizing prison space for people convicted of more serious offenses. From 2009 to 2016, the share of the state’s imprisoned population who were serving time for violent crimes rose from 52 to 66 percent.14

This analysis did not examine the reform’s possible impact on the state’s jail population because of data limitations. However, data from the federal Bureau of Justice Statistics show a nearly 12 percent decline in the statewide jail population from 2009 to 2015, more than double the national decline of 5 percent.15 Raising the felony theft threshold may have slowed the decline of South Carolina’s jail population, though, by shifting a subset of people convicted of theft crimes from prisons to jails. 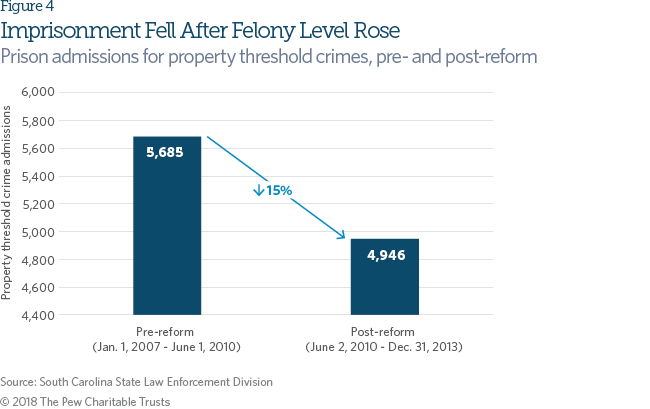 The decline in prison admissions for lower-level offenses reflects South Carolina’s effort to align its policy with the growing body of research demonstrating that prison terms are no more likely than noncustodial sanctions to reduce recidivism. Researchers have consistently found no differences in rearrest and reconviction rates between comparable individuals sent to prison and those given noncustodial sanctions, both in short- and long-term analyses, even when controlling for education, employment, substance use disorder, and current offense.16

During the post-reform period, prison sentences across all criminal offenses in South Carolina increased from 2,102 days to 2,178. On the other hand, the average sentence for a property threshold crime decreased by a statistically significant amount, from 1,695 days pre-reform to 1,464 days post-reform, probably as a result of the threshold change and related sentence reductions.17 Specifically, larceny sentences fell from 1,711 days to 1,540, and those for shoplifting dropped from 1,746 days to 1,370.18

South Carolina’s policy reform reflects mounting evidence that long prison terms are not the most effective way to reduce crime. Research shows that the certainty and swiftness of a punishment have more impact on an individual’s decision to commit a crime than does the severity of that punishment.19 Furthermore, lengthy prison sentences are costly for taxpayers, averaging about $30,000 per inmate per year.20

Research shows that long sentences have little marginal effect on crime reduction through either deterrence or incapacitation.National Research Council, “The Growth of Incarceration in the United States” (2014) 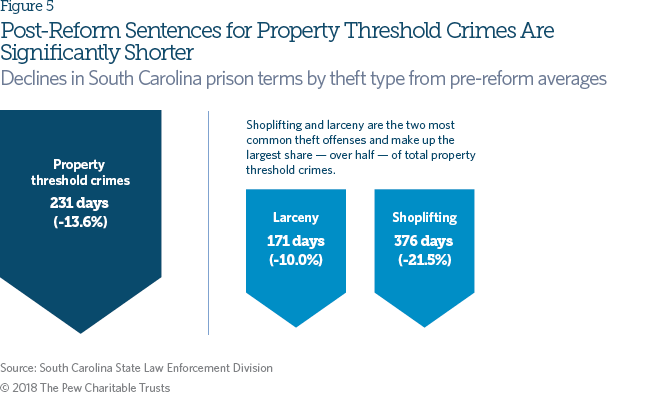 This analysis contributes to a growing body of evidence showing that states can raise felony thresholds for theft offenses without increasing property crime. Pew’s 2017 analysis of threshold increases in 30 states found that those changes did not interrupt downward trends in property crime or larceny rates. This study expands on those findings by demonstrating that neither theft offenses nor the value of stolen goods increased after South Carolina doubled its threshold, and that prison admissions and sentence lengths for theft offenses declined after the reform. These outcomes support the state’s goals of prioritizing costly prison space for more serious offenses and helping people avoid the consequences of a felony conviction, such as potential prison time and reduced employment and housing opportunities.

Pew and its research partner Choice Research Associates conducted an interrupted time-series analysis with monthly state-level UCR offense data for the property index crimes of burglary, larceny-theft, and motor vehicle theft, as well as the violent index crime of robbery. To address historical and regional factors that may compromise the causal inference in a time-series analysis, the study also analyzed crime rates for North Carolina, which did not adjust its theft threshold during the same period. Three Southern states were considered for the control state analysis, and North Carolina was chosen because its crime trends, population demographics and density, economic indicators, geographic location, and theft threshold level were similar to those in South Carolina.

Pew analyzed individual-level criminal history data provided by the South Carolina State Law Enforcement Division and the Department of Corrections from 2007 through 2013. The data were divided into two periods— pre-reform (Jan. 1, 2007, through June 1, 2010) and post-reform (June 2, 2010, through Dec. 31, 2013)—and averages were calculated for both periods.

Pew also looked at data from the National Incident-Based Reporting System (NIBRS) from May 2009 through June 2011 to allow for analysis of one year of data before and one year of data after passage of the June 2010 reform. NIBRS provides comprehensive data on crimes reported to police, not arrests. In South Carolina, all law enforcement agencies participate in NIBRS data collection. All incidents involving a larceny-theft and including valid property value information were included in the analysis. The following offense types were reviewed: pocket-picking, purse-snatching, shoplifting, theft from building, theft from coin-operated machine or device, theft from motor vehicle, theft of motor vehicle parts/accessories, and other. The total value of stolen goods reflects the total reported stolen in each incident.

The study used median instead of average dollar amount because a substantial number of incidents listed the total value of property stolen as zero, thus biasing the average. Zero dollar values can occur, for example, when the theft offense was not completed.

This brief has benefited from the insights and expertise of Gaylene Armstrong, Ph.D., director and professor in the School of Criminology and Criminal Justice at the University of Nebraska, Omaha; and David A. Soulé, Ph.D., executive director of the Maryland State Commission on Criminal Sentencing Policy. Neither they nor their organizations necessarily endorse the brief’s conclusions.