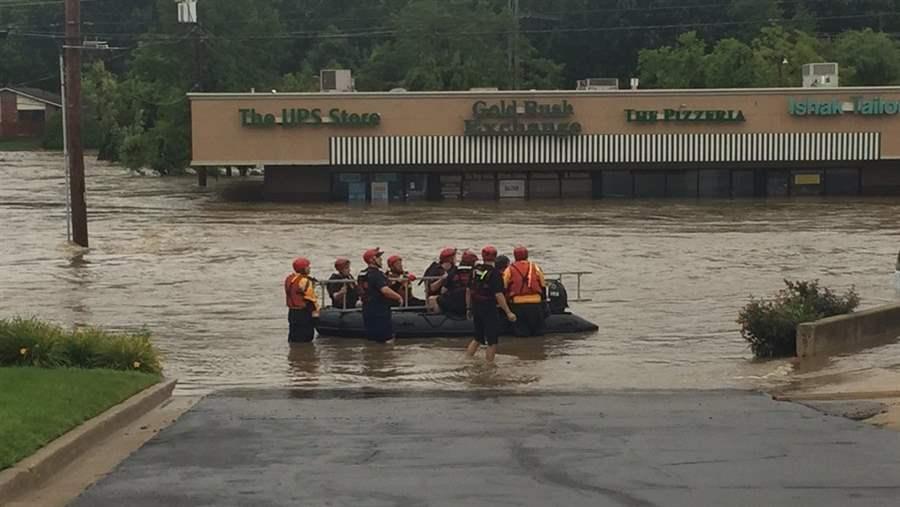 Firefighters rescue employees from a local shopping center in Kansas City, Missouri, in August 2017 after the area was flooded with 9 inches of rain.

Founded as a port at the confluence of the Kansas and Missouri rivers, Kansas City is all too familiar with flood events. The great floods of 1951 and 1993 devastated much of the city, and most recently, a two-day deluge last summer inundated K.C. with 9 inches of rain, damaging homes and businesses, rendering roads impassable, and killing one resident while stranding dozens of others. That storm hit two years after heavy flooding left the city and much of Missouri in need of more than $50 million in federal assistance.

For Kansas City Mayor Sly James, building a resilient city through improved infrastructure has been a priority since he took office in May 2011. In 2013, Mayor James joined a national campaign to create more resilient communities in response to the growing risks from extreme weather, and in 2017 he approved $150 million to improve flood control as part of a greater $800 million bond infrastructure package. A portion of that will go toward completing the final phase of a flood-control project in Turkey Creek, a low-lying area prone to flooding. The work includes widening the creek channel, adding native landscaping and a 10-mile trail (to help absorb flood waters), and installing pipelines to divert stormwater.

The Turkey Creek project will complement the recently finished Middle Blue River Basin Green Solutions pilot initiative that created over 100 rain gardens along with converting more than 5,000 feet of impervious surfaces to ones that can absorb water. Together, these solutions are helping reduce stormwater outflow and flood risk while improving water quality throughout the city.

“The flooding in Turkey Creek had severe social and economic repercussions for businesses and property owners,” said Mayor James. “We’ve been able to improve the infrastructure with local and federal investment.”

Mayor James also joined hundreds of other elected officials from across the U.S. in calling on the federal government to ensure that efforts to modernize our country’s crumbling infrastructure include making it flood-ready.

Kansas City has shown that improving infrastructure and reducing flood risk go hand in hand. The city’s diverse approaches to flood-risk management represent not only a framework for other communities to consider but a growing acknowledgment—by local and state officials around the country—of the need for flood-ready infrastructure. To capitalize on this momentum, Congress and the Trump administration should do all they can to ensure America’s infrastructure can weather the storms to come.

“It's imperative that we support resiliency requirements that ensure our infrastructure is built to last the next big flood, and the next, and the next,” said Mayor James.