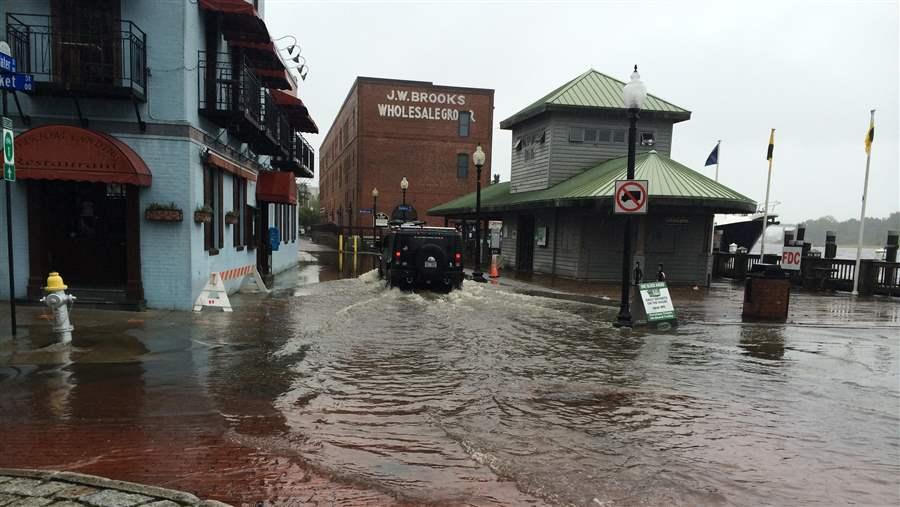 A car navigates a flooded street in Wilmington after the city received more than 12 inches of rain over six days in October 2015.

Rising seas and stronger storms have brought an ever-increasing threat of flooding to Wilmington, North Carolina, and with it a need for better planning to handle the new normal in the Port City.

Mayor Bill Saffo is leading the effort, noting that he and other city officials aren’t “sitting on the sidelines but instead taking action” to integrate flood-risk management with solutions to long-standing challenges related to transportation, public safety, and infrastructure.

In 2013, Wilmington launched the Community Resilience Pilot Project, focused on identifying strategies to reduce the vulnerability of the city’s water and wastewater infrastructure to rising seas, flooding, and extreme weather.  The suite of more than 50 adaptation options range from relocation of critical facilities, to incorporating sea-level rise into building codes, to creating nature-based solutions such as rain gardens. The process has helped steer Wilmington’s investment of millions of dollars into projects that will improve stormwater drainage and reduce future risk and also can serve as a roadmap for other communities with similar challenges.

Mayor Saffo also joined a bipartisan group of over 250 local and state officials from across the country in signing a statement of principle calling on the federal government to ensure that the nation’s infrastructure is flood-ready.

Citing Wilmington’s initiatives as an example, Saffo said the federal government’s efforts to modernize the country’s infrastructure should include stronger building requirements, better utilization of nature-based defenses, and a greater reduction in unsustainable development.

Water will always be part of the fabric of Wilmington, but by accounting for flood risk when planning for the future, the city aims to thrive in the new reality.

As Mayor Saffo said, “Investing in pre-disaster mitigation saves [money], and it makes sense to build something right the first time.”

City Spotlight
Infrastructure Week: How Communities are Becoming Flood-Ready In Flood-Weary Kansas City, Modifications Save Buildings and Dollars How a New Flood Strategy Helped a Colorado City Skirt Disaster After 1,000-Year Flood, Baton Rouge Moved Fast to Lower Risk
Related Resources
Before the Flood: The Value of Mitigation The Financial Toll of Flooding—Part 1