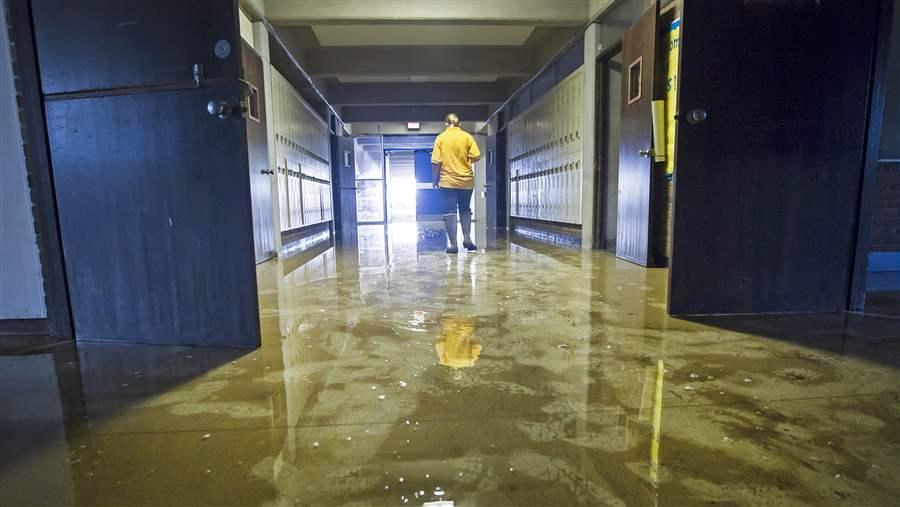 A faculty member walks down a flooded hall at Cristo Rey Baton Rouge Franciscan High School in Baton Rouge, Louisiana, in August 2016, shortly after the school was built.

From the great flood of 1927 that inundated nearly one-fourth of the state, to Hurricane Katrina—the most costly natural disaster in U.S. history—to the devastating 2016 deluge that damaged over 40,000 homes, Louisiana is no stranger to flooding. The state faces a consistent threat of hurricanes and heavy downpours, along with rising waters along the Gulf of Mexico that consume approximately one football field-size chunk of coastline every 100 minutes.

And in a low-lying state with major cities along the Mississippi River, the threat is not limited to the Gulf Coast. While New Orleans is better known for flood resilience, cities farther inland, including the state capital of Baton Rouge, are starting to take action as well.

Nestled along the Mississippi River and just west of the Amite and Comite rivers, Baton Rouge experienced a 1-in-1,000-year deluge in August 2016. In east Baton Rouge, over 48,000 structures were affected, and residential property damage totaled $1 billion. Statewide, the storm resulted in more than $10 billion in losses and at the time was the costliest U.S. flood-related disaster since Hurricane Sandy in 2012.

Baton Rouge Mayor Sharon Weston Broome was one of the thousands who were forced to find temporary housing as a result of the 2016 flood and, since taking office in 2017, has wasted no time in making flood prevention a top priority. From securing federal funds for community recovery efforts to strengthening property maintenance codes and improving stormwater drainage systems, Mayor Broome’s administration is creating an unprecedented level of flood preparedness in the city.

The plan, which has been tasked to a private firm for development, is expected to yield data-driven recommendations for the city this summer. Those findings will help determine where and how the city expands stormwater capacity, which it will do in part by leveraging the more than $100 million secured in Hazard Mitigation Grant Program money after the 2016 flooding.

Because floodwaters don’t recognize city or state boundaries, Mayor Broome believes improvements in flood mitigation measures upstream can help reduce Baton Rouge’s risks. That’s why she is also leading the call for an Amite River Basin regional watershed management plan. Given that the river runs for more than 100 miles, from Mississippi south through east Baton Rouge to Lake Maurepas, the mayor is confident that collaboration with other communities can result in much better return on flood mitigation investment for all areas in the Amite’s flood plain.

Mayor Broome also joined a bipartisan group of more than 250 mayors, state legislators, and governors from all 50 states in signing a statement of principles calling on the federal government to ensure that the nation’s infrastructure is flood-ready.

Louisianians know that more floods are coming, and that’s why other leaders in the state are, like Mayor Broome, beginning to increase flood preparedness in their communities. Those actions should save lives, reduce costly damage, and help communities better withstand storms.

City Spotlight
Infrastructure Week: How Communities are Becoming Flood-Ready As Seas and Flood Threat Rise, a North Carolina City Prepares In Flood-Weary Kansas City, Modifications Save Buildings and Dollars How a New Flood Strategy Helped a Colorado City Skirt Disaster
Related Resources
Before the Flood: The Value of Mitigation The Financial Toll of Flooding—Part 1