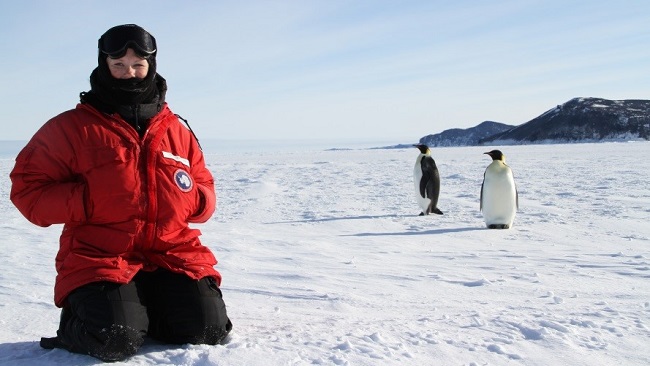 “Though the Southern Ocean is expansive and wildlife is abundant, the food web is relatively simple,” says researcher Michelle LaRue. “All predators, including penguins, depend on krill either directly or through other prey that eat krill. Protecting krill means protecting all the other wildlife there and ultimately the Southern Ocean ecosystem.”

While penguins inspire a range of whimsical and warm emotions, they play a serious role as sentinels of ocean health. Perhaps no one knows that better than Michelle LaRue, an ecologist and science communicator at the University of Minnesota who has walked among these tuxedoed, flightless birds in Antarctica six times.

To celebrate World Penguin Day on April 25, we caught up with LaRue, whose current research focuses on using high-resolution satellite imagery to study polar animals, including emperor and Adélie penguins, and the effects of climate change on polar vertebrates. She has participated in many “species from space” studies, including the first global census of two Antarctic penguin populations.

A: Hands down, the emperor penguin. Not only are they perfectly adapted for life in one of the harshest environments on Earth, but they also never cease to amaze me as a scientist. For instance, emperor penguins can dive 1,500 feet deep, and when they do that their heartbeat slows to just a few beats per minute. They resurface with very little damage to their cells. These physiological mechanisms may have implications for human health—for example, in surgeries or patients who have suffered from a stroke.

Also, based on decades of observations and research, we understood that emperor penguins lived exclusively on the sea fast ice [sea ice that’s attached to the continent]. Well, sometimes when winter sea ice conditions aren’t great, colonies have been observed hopping up on the nearest ice shelf or glacier—something I never expected to see. Finally, emperors are my favorite because they’re absolutely stunning to look at and their name is befitting their personality. They really are regal. 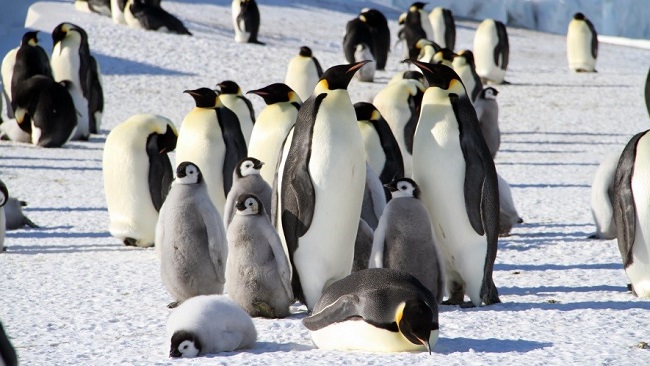 Understanding the physiological abilities of emperor penguins could help in human surgeries and to treat stroke patients.

Q: What are some of the more fascinating findings from your recent research of penguins across Antarctica?

A: We now understand there are nearly 600,000 emperor penguins around the continent, an estimate that is substantially more than previously thought. This first-ever census of the species gives us a baseline from which to learn about how environmental change may influence their populations and habitat.

In the case of Adélie penguins, we know that over the course of around 50 years, a melting glacier resulted in more available habitat at Beaufort Island [in the southern Ross Sea], which seems to have altered the species’ metapopulation dynamics—that is, birds at Beaufort Island decided to stay put more often rather than exploring other colonies as they did in the past. It remains to be seen what this really means, but it’s a process we can monitor. 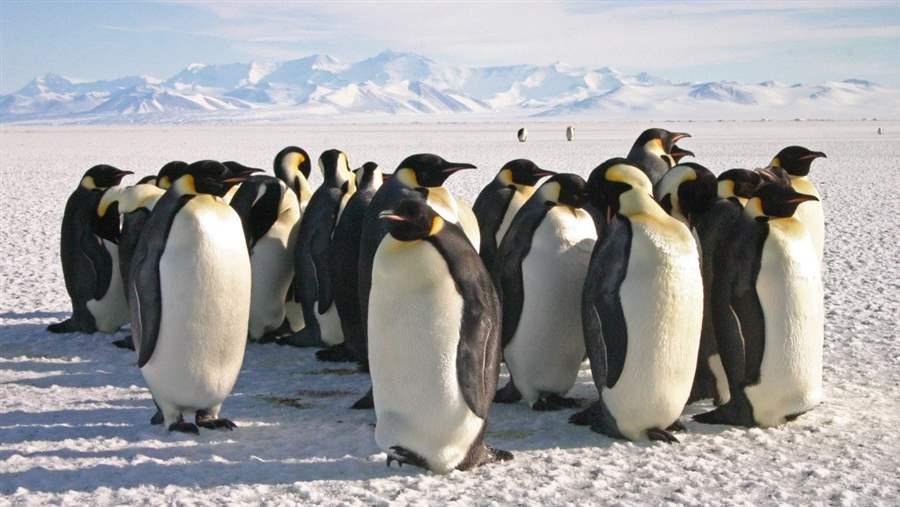 Emperor penguins form a loose huddle in Antarctica. LaRue calls this species her favorite “because they’re absolutely stunning to look at and their name is befitting their personality. They really are regal.”

Q: Why is safeguarding Antarctic krill, a thumb-size crustacean, so important to penguins and the region’s ecosystem?

A: Though the Southern Ocean is expansive and wildlife is abundant, the food web is relatively simple: All predators, including penguins, depend on krill either directly or through other prey that eat krill. Protecting krill means protecting all the other wildlife there and ultimately the Southern Ocean ecosystem.

Q: The Southern Ocean is known for its outstanding biodiversity. What makes this region such a productive ecosystem for penguins?

These connections are all dependent on several factors, including sunlight, sea ice, and phenology, or the timing of these processes. Altering the availability of sea ice, for example, would have an impact on the phytoplankton, then the krill, and ultimately the penguins. That these connections have remained relatively intact throughout most of the Southern Ocean is one of the reasons that the ecosystem is home to so many penguins. 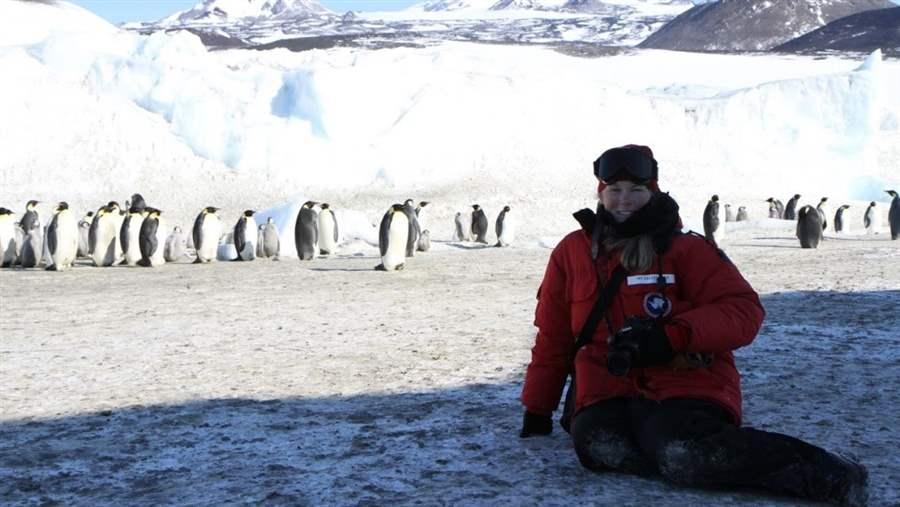 LaRue with emperor penguins along the Ross Sea in 2012, before part of the region was designated as the world’s largest protected area in 2016.

Q: In 2016, the Commission for the Conservation of Antarctic Marine Living Resources [CCAMLR] designated 2.06 million square kilometers [almost 800,000 square miles] of the Ross Sea as the world’s largest protected area. CCAMLR is considering proposals to protect the waters off East Antarctica, the Weddell Sea, and the Antarctic Peninsula. Can you explain why large, permanent, no-take marine reserves are so important for penguins and other species?

A: When people fish for krill in the Southern Ocean, they are essentially competing with penguins for that food source. [Krill are heavily fished in some parts of the Southern Ocean for use in fish oil supplements, animal feed, and other products.] In fact, when I talk with first-grade classrooms about Antarctica, I bring up the idea of sharing—and what happens if we don’t do a good job of sharing with the penguins. This is a question that these students always easily answer and demonstrates why having marine reserves in place is important. We have a duty to make sure that we are not negatively impacting populations of krill predators or altering the ecosystem in ways that cannot be undone. Marine reserves allow us to set aside parts of the ocean to make sure that we can fulfill this duty. 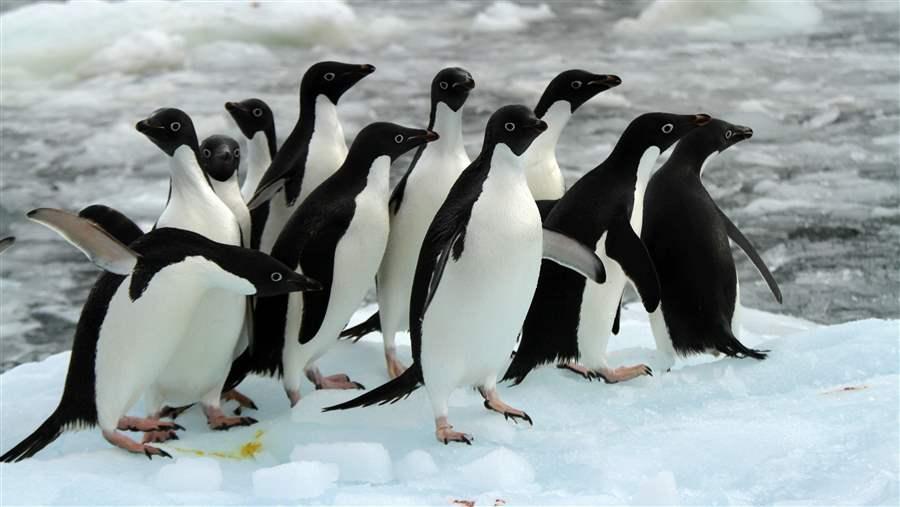 Adélie penguins on an ice floe look into the icy waters off the Antarctic Peninsula.

Q: The Weddell Sea is one of the most undisturbed marine ecosystems in the world and is one of the areas CCAMLR is considering for protections. What makes this area so special?

A: The sea ice habitat in the Weddell Sea, and its inaccessibility, makes the area unique. Some of the largest colonies of emperor penguins live there, as well as crabeater seals, Weddell seals, whales, and—closer to the northern portion of the Antarctic Peninsula—Adélie penguins. I have attempted to get to the Weddell Sea to no avail, largely due to weather but also because the sea ice often prevents access. With so few people visiting the area, it is one of the rare places on Earth that humans haven’t directly altered and is a stellar example of an undisturbed Antarctic seascape. 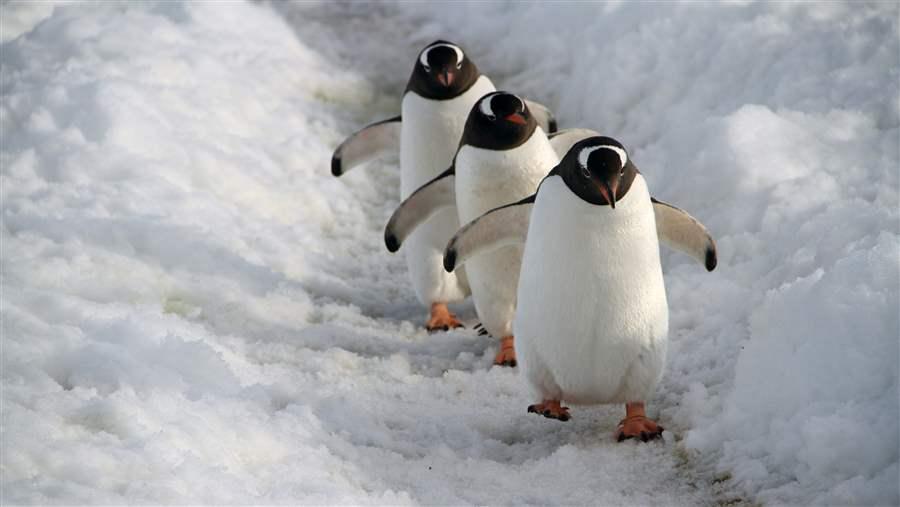 Gentoo penguins in the Antarctic Peninsula are categorized as Near Threatened with extinction. Marine protections in the region would help safeguard krill, a main source of food for gentoos and other species.

The Future of the Antarctic Peninsula

More than 1.5 million pairs of Ad&eacute;lie, gentoo, and chinstrap penguins call the Antarctic Peninsula Home. Chile and Argentina proposed designating these critically important waters as a marine protected area (MPA) at the annual meeting of the Commission for the Conservation of Antarctic Marine Living Resources (CCAMLR) meeting in Hobart, Tasmania, in October.