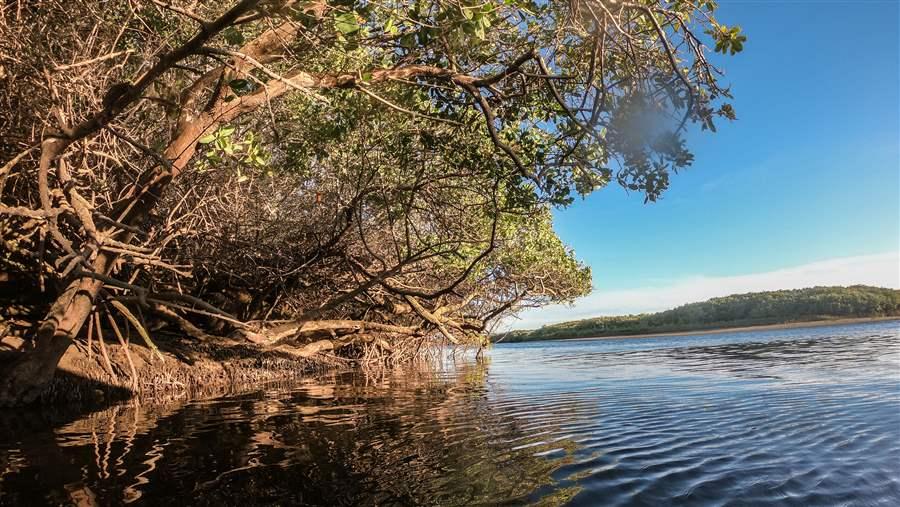 Conservation of critical habitat such as mangrove ecosystems—which have been reduced by 30 percent in 40 years—is an area of focus for this year’s Pew marine fellows.

From using satellites to monitor mangrove forests to forecasting how fish populations will respond to changing ocean conditions and understanding how plastic waste travels on ocean currents, the 2018 Pew marine fellows will tackle pressing issues affecting ocean conservation. The geographic range of the work is equally broad, with projects planned from New England to Fiji, and Asia to Latin America.

Hailing from seven countries, the eight new fellows join a group of scientists and conservationists who have received support from the Pew Fellows Program in Marine Conservation to research important topics and test solutions to marine conservation issues. Here are the 2018 fellows, and the problems they are working to solve.

With climate change among the most pressing issues affecting marine environments, fellow Katherine Mills, associate research scientist with the Gulf of Maine Research Institute, is studying distribution shifts in 50 fish and invertebrate species in the northeastern United States to explore how they respond to warming waters. In a separate project in West Papua, Indonesia, Ricardo Tapilatu, faculty researcher and lecturer at the Research Center for Pacific Marine Resources, University of Papua, will use a combination of radio tags, data, and models to gain new insights into how Earth’s changing climate is affecting sea turtle populations.

Are fisheries policies fair to all?

Sangeeta Mangubhai, director of the Fiji country program at the Wildlife Conservation Society, will take a social science approach to investigate how global fisheries policies account for small-scale fishers in the western Pacific Ocean. More than half of small-scale catches in the Pacific region are taken by women.

How are habitats faring?

Recognizing that marine life relies on ample, healthy habitats for survival, Octavio Aburto-Oropeza, associate professor at the University of California, San Diego/Scripps Institution of Oceanography, will develop a system to track the distribution, health, and value of mangrove forests across the globe and consider the economic impacts of the loss of these critical habitats, which have been reduced by 30 percent in the past 40 years. In Japan, Gregory N. Nishihara, associate professor at Nagasaki University, plans to combine research and a community-based approach to encourage the restoration, conservation, and sustainable management of seaweed, which is a key habitat for many species.

Ronel Nel, associate professor in marine ecology at Nelson Mandela University, will research what factors can cause turtle populations in South Africa to become “refugee” species and will consider the impacts when this endangered species is displaced into less suitable habitat, where it may struggle to survive. In China, Wuying Lin, scientific director at Guangxi Biodiversity Research and Conservation Association, will study threatened marine wildlife in southern China to address illegal trade of these species and will employ research and monitoring to reduce poaching and expand conservation.

In Chile, Martin Thiel, professor of marine biology at Universidad Católica del Norte, plans to collect and analyze information on the composition and abundance of marine plastic litter. Plastic debris in the oceans endangers marine life by entangling animals and, when consumed, causing internal injuries. It may also spread invasive species across the globe.

Together, the research of these and other fellows could underpin critical decision-making for coastal and marine projects around the world.

The Pew Fellows Program in Marine Conservation is dedicated to conservation of the world’s oceans and marine life. Each year, an international committee of external marine specialists selects outstanding midcareer scientists and experts and supports them with three-year, $150,000 fellowships. Individuals chosen are both highly accomplished in their respective fields and sufficiently prepared to use their fellowships to undertake unique and compelling work that will inform better management and conservation of the world’s oceans.

The fellows’ high-quality projects will seek stronger protections for global marine life. The goal of the program is to engage talented scientists and other experts in addressing the threats to our world’s oceans. The work of these individuals is key to protecting marine species and habitats. To date, 164 people from 38 countries have been recognized as Pew marine fellows.