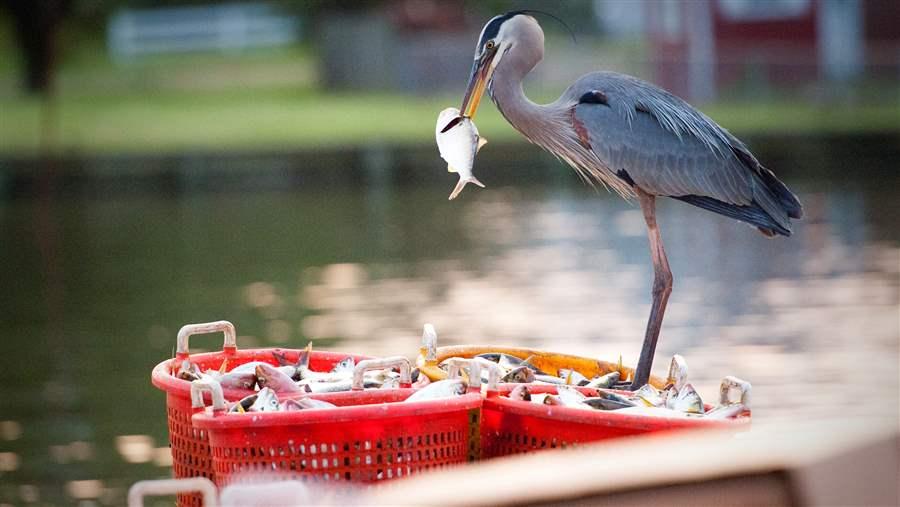 A blue heron helps itself to a menhaden from a fishing boat’s catch near Tilghman Island, Maryland, in the Chesapeake Bay.

Last week was big for menhaden, a forage fish that is prey for many wildlife species and is the focus of the East Coast’s largest fishing operation. On Nov. 13 and 14, the Atlantic States Marine Fisheries Commission’s Menhaden Management Board met in Linthicum, Maryland to set catch limits and other policies for this critical species. The result was a mixed bag that shows some promise for working toward the long-term sustainability of menhaden but falls short of the certainty many fisheries experts and conservationists had sought. In the months leading up to the decision, one thing became perfectly clear: Public support for protecting menhaden’s role in the ecosystem has never been stronger.

To help fishery managers set population goals for menhaden, scientists recommend using so-called ecological reference points—a relatively high target that managers should strive to achieve and a lower boundary, called a threshold, that they should not fall below. If the menhaden population stays within this range—and ideally much closer to the target number—fishing could continue and the species’ predators would have enough to eat. Of 158,106 public comments submitted to the commission on this issue—a record number for this body—more than 99 percent, including one from The Pew Charitable Trusts, called for managers to begin using ecological reference points for menhaden now.

Instead, managers voted to wait for scientists to provide ecological reference points specific to menhaden, and in the meantime to continue managing the important forage fish as they have been. 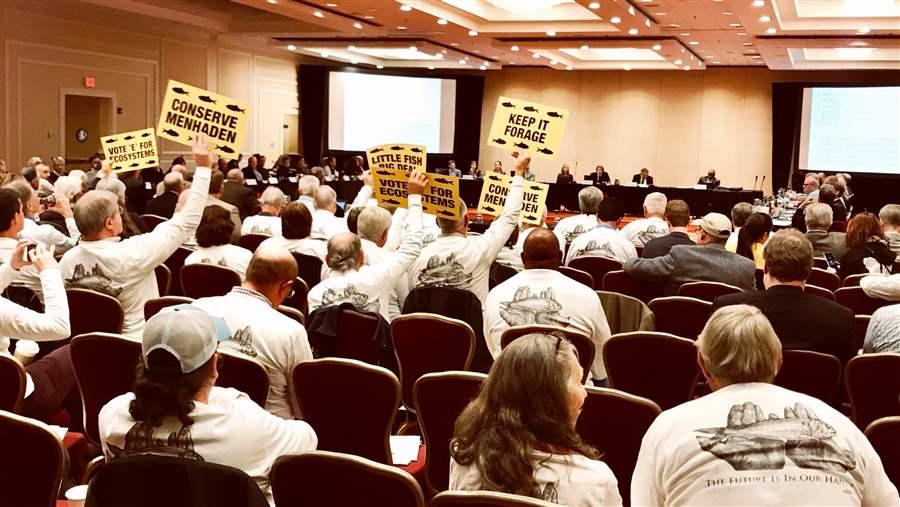 More than 100 conservation advocates attended the meeting outside Baltimore to remind managers that menhaden matter for more than just commercial fishing interests.

Commission Chair Robert Ballou acknowledged in a media statement that “the board’s action was not supported by the majority of public comment received” but pledged that it “placed the development of menhaden-specific ecological reference points as its highest priority.”

Both federal agencies on the commission—the U.S. Fish and Wildlife Service and the National Oceanic and Atmospheric Administration’s Fisheries Service (NOAA Fisheries)—voted against moving forward with ecosystem-based management for this crucial species. This was disappointing, given that the U.S. Fish and Wildlife Service had championed conservation at the commission for years, and because NOAA Fisheries just committed to a more comprehensive approach to managing fisheries through its recent ecosystem-based fisheries management policy and roadmap.

The commission also voted on issues with a shorter-term focus: the coastwide catch limit for menhaden; how to divide the catch among states; and a catch limit for the Chesapeake Bay. On coastwide catch, the commission raised the limit by 8 percent, an increase that will be sustained through 2019. This decision allows the amount of commercial fishing to exceed levels seen before there was any coastwide catch limit, and without regard for how the increase could affect predators. With less menhaden in the water, wildlife on the East Coast—and the many people and businesses that enjoy and rely on healthy populations of this wildlife—will suffer. Increased commercial fishing could even reverse the apparent population growth and geographic spread of menhaden over the past few years.

The board also voted to allot more of the catch to Northern states, where scientific evidence suggests menhaden populations have been recovering from historically low levels. In a good move for effective management, the board chose not to allow unused quota to roll over from one year to the next, which would have permitted commercial fishermen to exceed science-based catch limits on menhaden.

The best conservation news of the meeting focused on where commercial fishing is concentrated. The commission reduced the allowable catch by nearly half in the Chesapeake Bay due to ongoing concerns about the health of that ecosystem. Crucially, that means that the increased catch of menhaden in 2018 and 2019 will not come from the Chesapeake Bay, menhaden’s most important nursery.

The decisions made last week will be in place for two years. The clock is ticking for the Atlantic States Marine Fisheries Commission to deliver on its commitments to manage menhaden as more than just a fish to be removed from the water but for the important role it plays in the ecosystem, including as prey. In 2019, when the commission makes its next big decisions on menhaden, it must finally embrace big-picture fisheries management for one of our country’s most important forage fish.

Joseph Gordon is the senior manager for mid-Atlantic ocean conservation at The Pew Charitable Trusts.

Related Resources
Support Pours In for Conserving Menhaden Along the Atlantic Coast A Vision for Menhaden: Supporting Anglers, Wildlife, and Businesses From Florida to Maine