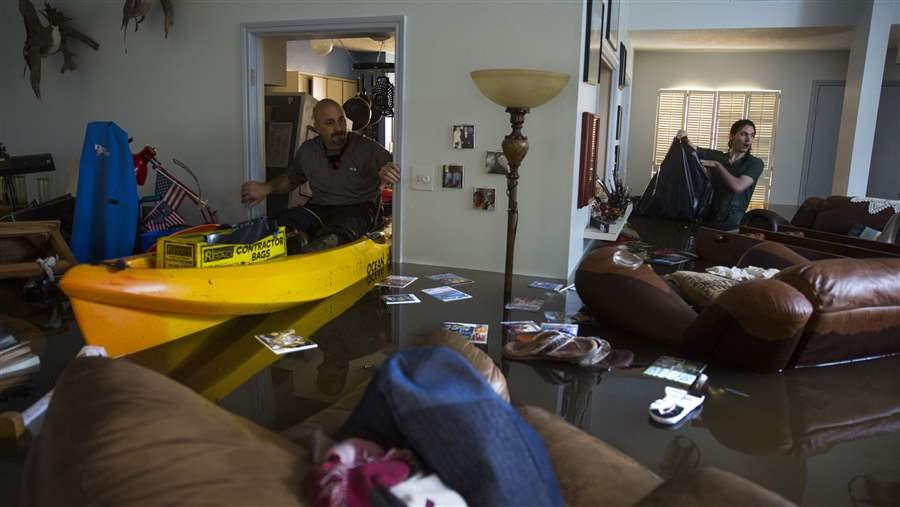 Larry Koser Jr., left, searches his home in west Houston with his son Matthew for important papers and heirlooms after it was flooded by heavy rains from Hurricane Harvey.

Today, as part of a bill authorizing aid to Hurricane Harvey victims, Congress passed a three-month extension of the National Flood Insurance Program (NFIP) to keep it from expiring on Sept. 30. At the height of an active and deadly hurricane season, the extension ensures that the NFIP will continue providing flood insurance and processing claims for victims of Hurricane Harvey and other floods, which almost certainly will include major impacts from Hurricane Irma in the coming days.

With this short-term reauthorization in place, Congress should debate much-needed reforms to the national program, which insures nearly 5 million policyholders across all 50 states. The NFIP is already $25 billion in debt, which is why Congress must act soon to reform the program and provide it with a solid financial footing. The short-term NFIP extension should be followed by key changes to the program to reduce harm in future storms and lower costs to communities and government budgets.

Hurricanes Harvey and Irma underscore the substantial need to modernize the approach taken by the federal government to reduce flood risk. The Federal Emergency Management Agency (FEMA) has begun processing claims for homes and businesses affected by Harvey, and with Hurricane Irma threatening Florida the cost of losses and damages from the 2017 hurricane season is likely to be unprecedented.

The Pew Charitable Trusts urges Congress to include the following measures in NFIP reforms: