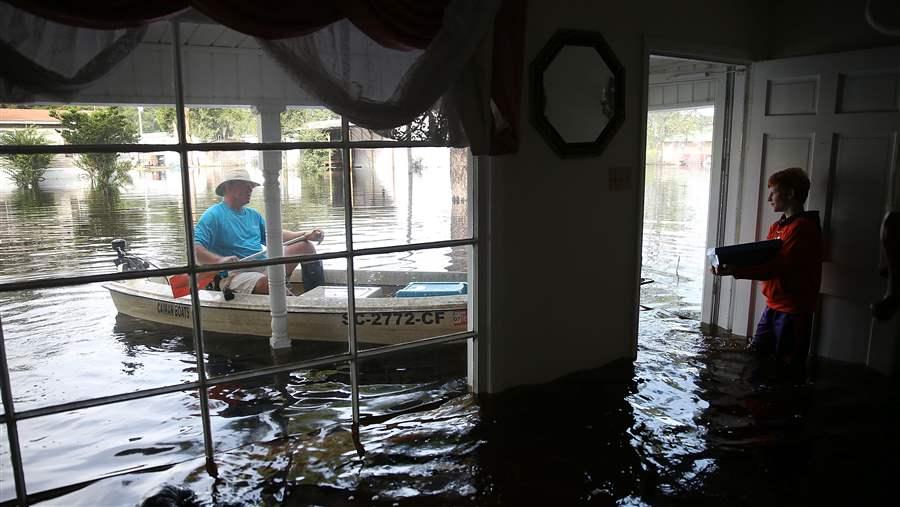 Allen Poston, left, and nephew Braxton Blakley in Andrews, South Carolina, after heavy rain in October 2015. A new survey finds that nearly a third of registered voters say they have been affected by flooding damage at their or a family member’s home, business, or place of work.

Almost three-quarters of registered voters—across party lines—support policies that would enable communities to better prepare for and respond to floods, according to a nationwide survey.

The poll, conducted by the research firm Public Opinion Strategies for The Pew Charitable Trusts, examined attitudes toward flood-related disasters and proposed policy reforms aimed at improving preparedness and reducing recovery costs. Specifically, participants were asked about the National Flood Insurance Program, which provides federally backed coverage for homeowners and small businesses in more than 22,000 U.S. communities and is administered by the Federal Emergency Management Agency (FEMA). The flood insurance program is nearly $25 billion in debt. Respondents overwhelmingly support proposals to require that property sellers disclose flood risk and that communities take steps to lessen flood impacts and thus reduce the costs of rebuilding.

Interviews of 1,000 registered voters were conducted by telephone March 11-19 and included both cellphones and landlines randomly selected from official Republican, Democratic, and independent voter lists. The margin of error is plus or minus 3.1 percentage points.