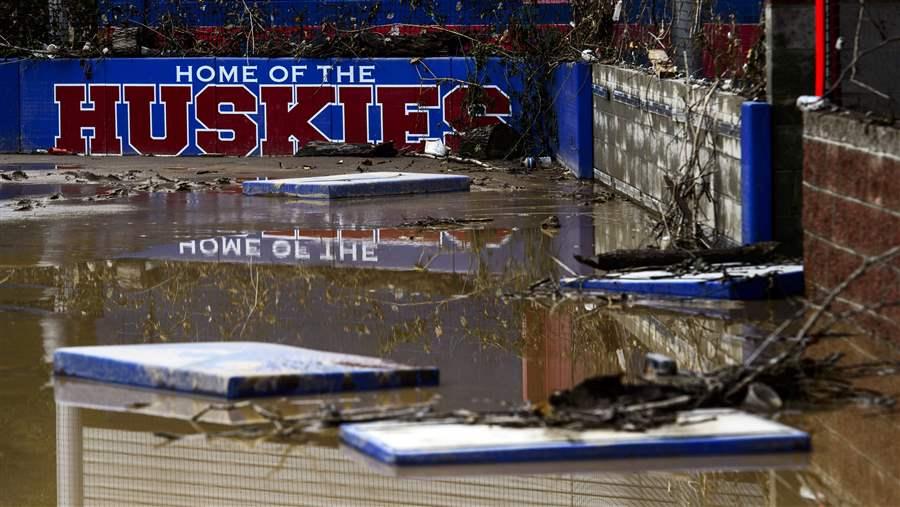 As students go back to school this fall, nearly 4 million will attend classes in buildings that have repeatedly flooded or face a high risk of flooding. More than 6,000 public schools across the United States are located in federally designated flood zones.

The risk isn’t restricted to coastal areas. New research by The Pew Charitable Trusts and partner ICF shows that many public schools in inland areas also face a high probability of flooding. Researchers mapped counties facing the greatest risk by developing a county-level flood risk score for public schools in all 50 states.

One-hundred counties in 23 states—with a total of 6,444 public schools—received the highest composite flood scores. Louisiana has the most counties with these scores.

When flooding forces schools to close, learning is disrupted, daily life is upended, and communities face steep repair costs. Unfortunately, many of today’s schools are not built to withstand severe weather or changing patterns of land use and demographics. And years of underinvestment have left much of America’s public infrastructure, including schools, dangerously close to failing, according to a March report. 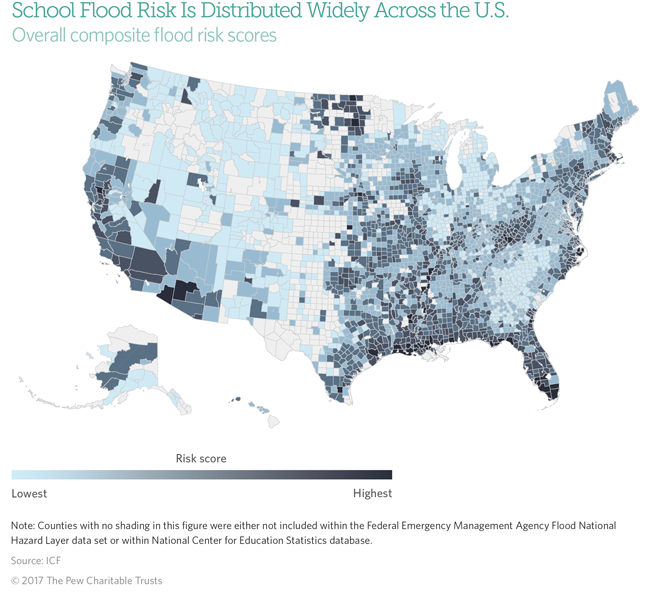 Pew highlighted three schools in Kentucky, Wisconsin, and Missouri that have been inundated in recent years and have taken proactive measures to reduce risks.

In 2013, flooding caused $60,000 in damage to McDowell Elementary in McDowell. The school was under 8 inches of water, debris, and mud. Built in the 1930s, the school had a history of flooding. Given the frequency and the high cost to repair flood damage, local leaders plan to consolidate with other schools and move outside the flood plain to minimize risk. Relocating outweighed the expense for operations, maintenance, and repeated flood cleanup at its original location.

In 2010, thunderstorms dumped 8 inches of rain on the Milwaukee area, inundating Nicolet High School, which serves over 1,000 students. It was at least the fourth flood, but this time the damage was the most ever incurred by the state insurance fund. The school board responded by improving the stormwater management system and redesigning parking lots and driveways to collect and temporarily hold runoff during heavier rains. These changes cut the school’s annual insurance premium from about $100,000 to $60,000.

Since the modifications were completed in 2013, Nicolet High School has been flood-free during several storms. By investing in projects to redirect rainfall, school administrators prevented new damage and disruptions for students.

In 2015, three days of heavy rainfall caused historic flooding of the Meramec River in Eureka. Eureka High School sustained $2.5 million in damage. Three-quarters of the school was flooded, as was the parking lot. Record-breaking flooding hit the city again this May, prompting planning by the school, the community, and federal officials on how best to protect the facilities from future storms.

As Congress considers ways to improve infrastructure and reduce the impacts of floods, these examples highlight some of the actions that federal agencies, Congress, communities, and school administrators can take to make schools more resilient to floods and reduce the costs of damage and repair.