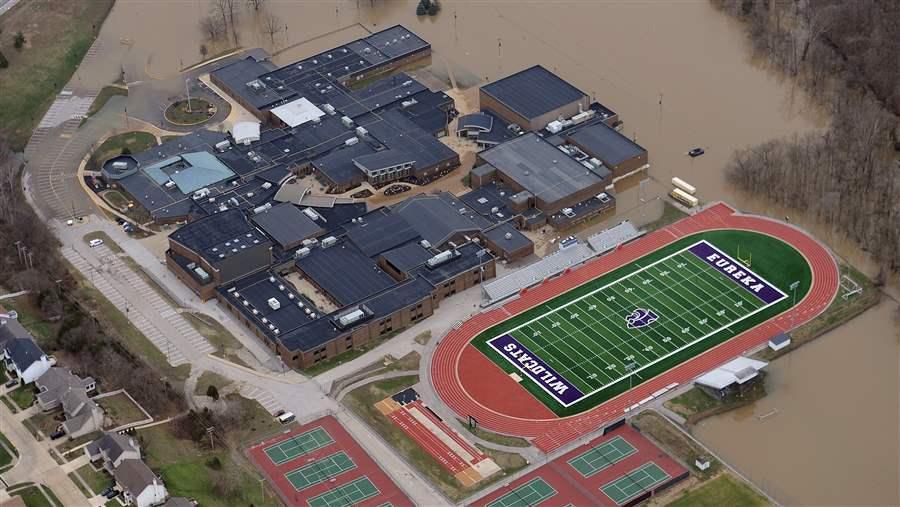 In 2015, three days of heavy rainfall caused historic flooding of the Meramec River in Eureka, Missouri, breaking the cresting record by more than 3 feet. Eureka High School sustained $2.5 million in damage. The unprecedented flood initiated conversations between school and federal officials on how best to protect the facilities from the impacts of future storms.

Between Dec. 26 and 28, 2015, heavy rain throughout the southern Midwest led to widespread flooding across Missouri and into central Illinois. Rainfall in Eureka, about 30 miles southwest of St. Louis, ranged from 6 to 12 inches, and the nearby Meramec crested Dec. 30 at 46 feet—3 feet higher than a long-standing record.1 This led to flash flooding, causing significant property damage. Seventy-five percent of Eureka High School was inundated, but the school’s athletic facilities bore the brunt of the damage.2 When the rain stopped, an inch of water covered the floor of the gymnasiums, 8 inches flooded the locker rooms, and the parking lot was underwater.3 The school was able to minimize further damage because it had moved supplies from low-lying storage areas that subsequently flooded.4 Record-breaking flooding hit Eureka once again in late April this year, prompting administrators to close the high school temporarily.5

I’ve been with the district for 25 years and … the water levels have never reached that level in the past.Chris Freund, director of facilities for the Rockwood School District, which includes Eureka High School 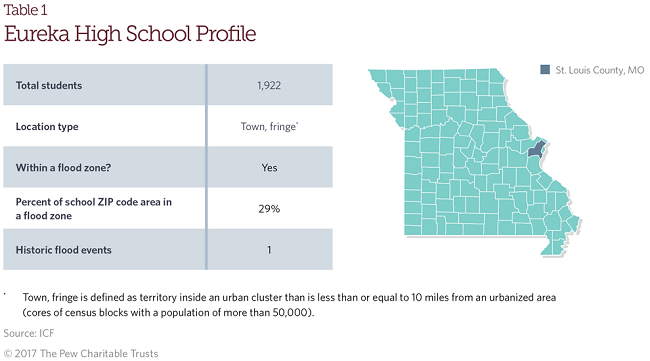 The Rockwood School District relied on insurance through the Missouri United School Insurance Council (MUSIC) to cover most of the $2.5 million in damage.6 MUSIC insures almost 90 percent of the school districts in the state. The self-funding program has 478 members, including public school districts, community colleges, and education associations, and an annual budget of about $75 million. Since 1985, it has managed over 100,000 claims.7

Eureka High School is the only campus among the 31 schools in the Rockwood district that has ever flooded. Due to the extensive damage, school officials are now preparing for future floods. Through collaboration with FEMA, officials are developing plans to prevent storms from causing extensive damage, such as installing flood doors on buildings. If FEMA approves the plans, work on the project could begin this summer.9

Eureka High School is not alone in its planning ahead for storms. The 2015 flood also damaged 80 homes and 40 businesses, ruined a portion of a railroad line, and shut down a 24-mile section of Interstate 44.10 Part of the problem is that Eureka’s stormwater system is overtaxed, so when there are heavy rains, flooding threatens certain parts of town. The community has raised concern about whether the recent construction of a levee downstream on the Meramec has increased the risk of flooding. By discussing these risks, the community is taking an important first step toward creating plans to mitigate them.

Leveraging partnerships to prepare for storms

Coordination between communities and federal experts on flood control is critical to managing risk. By partnering with FEMA and investing in flood insurance, Eureka High School is making the most of available resources and expertise. School officials’ proactive planning to reduce flood risk will help save money while also keeping students and staff out of harm’s way and boosting the community’s overall resilience to flooding. Applied nationwide, this type of forward thinking will ensure that facilities such as schools can protect themselves from future floods.