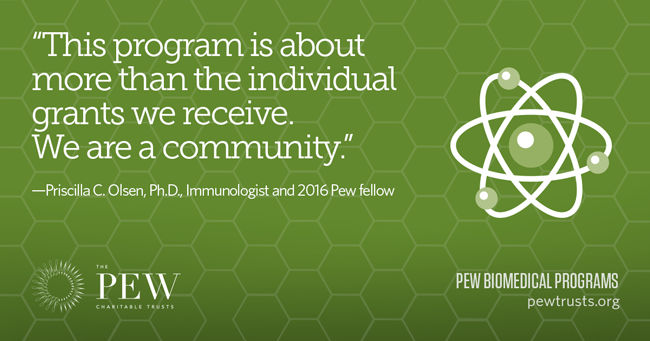 Every day, innovative research is happening around the world to advance human health—and these 37 scientists are among the people dedicated to doing just that. On June 15, Pew announced the 2017 classes of biomedical scholars, Latin American fellows, and Pew-Stewart Scholars for Cancer Research. The scientists who make up this year’s classes join a thriving community of more than 900 biomedical scientists from diverse research backgrounds. The scholars and fellows will gather at Pew’s annual meeting for the next four years to discuss their research, learn from peers in other fields, and form lasting bonds that will help propel and stimulate cutting-edge research.

Since 1985, Pew has harnessed scientific discovery to improve human health through the biomedical scholars, Latin American fellows, and Pew-Stewart Scholars for Cancer Research programs, which support the work of promising early-career scientists in the United States and Latin America. With the assistance of multiyear grants, these scholars and fellows are encouraged to pursue innovative research to advance human health and benefit society.

The 2017 awardees are exploring a wide range of research topics including:

Several scientists in the 2017 class are interested in learning how cells grow, repair, and replace themselves after injury. Ya-Chieh Hsu, Ph.D., is investigating a form of stem cells involved in hair loss and wound healing in order to develop strategies for alleviating side effects from chemotherapy, while Charles Y. Lin, Ph.D., is studying glioblastoma stem cells and how they allow cancer to resist therapy. Sabrina L. Spencer, Ph.D., is exploring the properties of slow-growing tumor cells that are impervious to treatment, and Daniel A. Bachovchin, Ph.D., is investigating novel inhibitors to kill tumor cells. Work in this area will spark innovative methods for regenerating new tissues from damaged cells and point to new targets for combating drug-resistant diseases and cancer growth.

Eight members of this year’s class are exploring how the balance of key cellular molecules, such as proteins and fats, is maintained to support proper cellular function. José L. Avalos, Ph.D., is studying how mitochondria process amino acids—building blocks of proteins—and how that affects cellular energy production. Mauricio A. Torres, Ph.D., is also looking to mitochondria for answers, specifically how this cellular structure regulates body temperature. Other researchers are developing specialized tools to measure the quantity and precisely pinpoint the location of molecules such as proteins and ribonucleic acids (RNA) within cells to better understand how their production is regulated (Gene-Wei Li, Ph.D.; Bin Wu, Ph.D.; and Robert Spitale, Ph.D.).

Erhu Cao, Ph.D., is studying how a protein called PKD2 senses ion fluctuation in kidney cells to develop treatments for diseases affecting the organ, and Naoki Yamanaka, Ph.D., is searching for chemicals to control the transport of steroid hormones in order to improve immune responses and combat cancer progression. Cesar L. Cuevas Velazquez, Ph.D., is studying how plants sense water availability in an effort to improve the drought tolerance of crops. Research by this group of scientists could inform new solutions for diabetes, cancer, obesity, high cholesterol, and kidney disease.

A number of diseases can be caused by variations in the way genes are expressed, so some scholars and fellows are looking at several cellular mechanisms that regulate whether genes are turned on or off. Four researchers are studying RNA and their effects on gene expression. Jorge Henao-Mejia, M.D., Ph.D., is examining how long, noncoding RNAs control the intensity of an immune response; Alan C. Mullen, M.D., Ph.D., is studying the role of these RNAs in chronic liver disease; and Nadya Dimitrova, Ph.D., is investigating the link between them and tumor formation. Carolyn M. Phillips, Ph.D., is studying a short form of RNA and how it prevents genes from being activated.

Other 2017 researchers are studying the molecules that interact with DNA and how they influence gene expression. Ibrahim Cissé, Ph.D., is interested in how proteins called RNA polymerase are directed to certain regions of DNA to activate particular genes. Elizabeth Villa, Ph.D., is using advanced tools to visualize how chromosomes are packaged in the nucleus of a cell and what happens during gene activation. Similarly, Rafik Neme, Ph.D., is studying a unique pond-dwelling organism to understand how our chromosomes are successfully copied and passed on during cell division.

To understand how mechanisms of gene control can go awry in cancer, Ana Fiszbein, Ph.D., is looking closely at the way cancer cells process RNA, and Robert K. McGinty, M.D., Ph.D., is probing for proteins that interact with chromosomes and how they affect gene expression. All of these researchers are using novel tools to deepen our understanding of the many ways gene expression can be controlled—work that could inform new strategies to combat asthma, cancer, and obesity.

Five of the researchers selected this year aim to enhance understanding of the way pathogens evade the immune system to cause disease. Heverton Dutra, Ph.D., is investigating Wolbachia—a bacterium that can reduce mosquitoes’ ability to transmit diseases such as malaria. Ana S. Peinetti, Ph.D., is developing diagnostic tools that permit early detection of the most severe dengue fever infections, also a mosquito-borne illness. David Veesler, Ph.D., is characterizing the structure of the virus that causes MERS (Middle East Respiratory Syndrome) to gain insight for designing effective vaccines. Shaeri Mukherjee, Ph.D., is uncovering how the bacteria that cause Legionnaires’ disease can subvert host immune pathways to survive and reproduce, and José E. Soto, Ph.D., is examining the structure of a protein that allows the Salmonella bacteria to inject infectious proteins into human cells. Work by these scientists could inform new methods for diagnosing and treating emerging infectious diseases worldwide.

Bacteria communicate with each other as well as with host organisms through an array of signaling molecules—an ability that is critical for the survival of the microbe communities and the host. To understand the role of bacterial communication in health and disease, Mohamed S. Abou Donia, Ph.D., is analyzing how molecules produced by gut bacteria have the potential to treat diabetes, while Djalma Souza Lima Junior, Ph.D., is examining whether obesity changes the community of bacteria living on skin and how this may affect the skin’s susceptibility to infections. María E. Inda, Ph.D., is hoping to employ gut microbes as diagnostic tools for inflammatory bowel disease, and Rachel J. Dutton, Ph.D., is studying bacteria on cheese rinds to understand how microbial communities form and communicate.

Neurobiology of Movement and Behavior

Scholars and fellows this year are also investigating how the brain responds to environmental cues and changes. Eiman Azim, Ph.D., is studying how neurons communicate in order to control movements such as eating, reaching, and grasping. Michael A. Crickmore, Ph.D., is learning about pathways in the brain that control motivation, including reproductive behaviors. Other neuroscientists are dissecting which parts of the brain control feeding behavior (Nilay Yapici, Ph.D.), how neurons allow us to focus our attention (Michael M. Halassa, M.D., Ph.D.), and how the brain perceives its surroundings (Silvio G. Temprana, Ph.D.).

To learn how the brain and immune system communicate, Anna Victoria R. Molofsky, M.D., Ph.D., is looking at the role of specialized cells called glia in the maintenance of nerve connections, and Kaoru Saijo, M.D., Ph.D., is exploring the interplay between immune cells and the brain in the development of depression. By closely examining how neurons communicate and direct responses in the body, these researchers hope to uncover new ways to rehabilitate patients from cognitive disorders and gain further insight into the complexity of human behaviors.