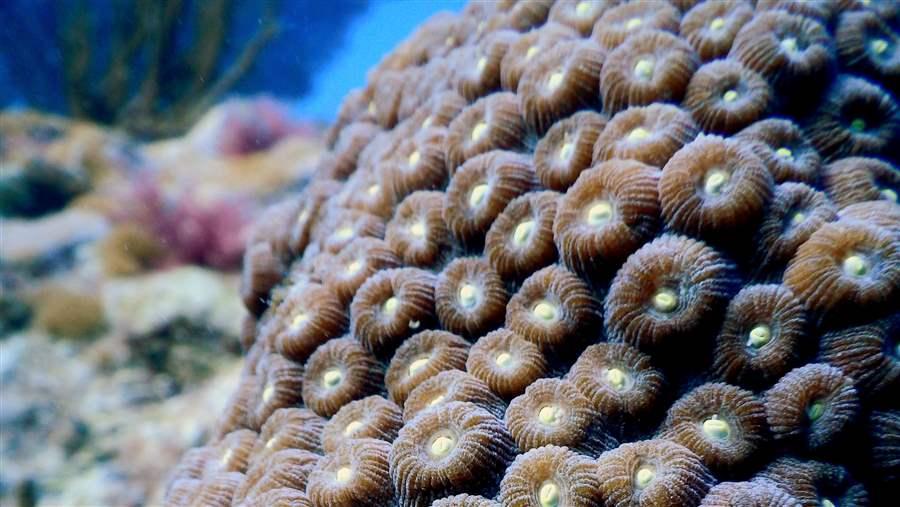 Corals such as Montastraea cavernosa can better tolerate temperature extremes when partnered with a specific group of microscopic algae.

In recent years, marine scientists in Florida have wondered why some corals are more resilient to climate change. Now those experts may have an answer: a microscopic organism that uses sunlight to make food for its hosts. This organism could help combat the global decline of coral reefs resulting from warming waters.

All reef-building corals live in partnership with these organisms, which are microscopic algae known as zooxanthellae. New research by Andrew Baker, a Pew marine fellow and marine biologist at the University of Miami, and his doctoral students, Rachel Silverstein and Ross Cunning, suggests that corals can better tolerate temperature extremes when partnered with a specific group of zooxanthellae, known as clade D of the genus Symbiodinium.

Baker’s group discovered that corals paired with clade D zooxanthellae resist bleaching at both warm and cold temperatures. This unusual tenacity may explain the findings of previous studies, which observed that clade D symbionts tend to become more common in reefs after mass coral bleaching events.

“This tolerance of both extreme heat and cold is the reason we call these symbionts ‘tenacious D,’” said Baker. “In some cases, [they] might help provide a lifeline for corals to help them survive extreme conditions.”

Exposure to overly warm or cool temperatures can trigger corals to expel their zooxanthellae, creating a condition known as coral bleaching. Without the symbionts, bleached corals appear ghostly white and lose the ability to photosynthesize—often resulting in death.

Scientists have long been concerned that climate change will make extreme ocean temperatures more common, resulting in more coral bleaching. Bleaching is devastating Australia’s Great Barrier Reef for the second year in a row, mirroring back-to-back episodes of bleaching in Florida in 2014 and 2015.

In the laboratory, Baker and his colleagues are able to make corals take on greater numbers of clade D symbionts—a process they call stress hardening. The team is now exploring whether this technique can be used to plant heat-tolerant corals in the ocean and, ultimately, help rebuild reefs in Florida. If successful, the technique could help coral reefs around the world persist in the face of climate change.

Related Resources
About the Researcher: Andrew Baker Article in Journal of Experimental Biology Unexpected Abundance of Fish in Some Reefs Hints at Better Conservation Strategies How to Catch Parrotfish While Protecting Coral Reefs