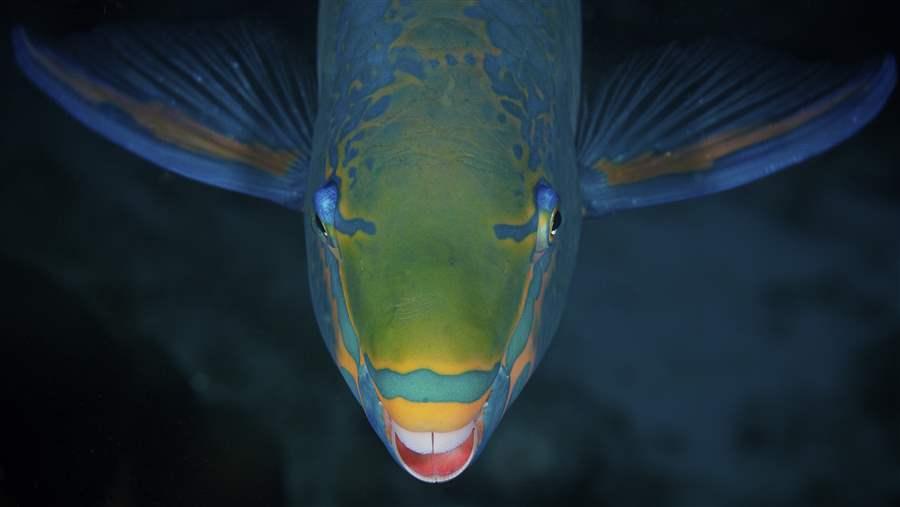 Critical to the health of reefs, parrotfish—such as this colorful Queen parrotfish in Bonaire—eat seaweed, also known as macroalgae, that would otherwise smother corals.

A simple change to Caribbean fisheries management could help sustain both coral reefs and fishermen in the face of climate change, according to a new study by Pew marine fellow Peter Mumby, an ecologist at the University of Queensland, Australia, and four colleagues.

Parrotfish are a keystone species on many coral reefs because they eat seaweed, also known as macroalgae, that would otherwise smother corals. However, parrotfish are also caught by commercial trapping and spear-fishing in the Caribbean Sea. Although some countries have banned their catch, most have few or no restrictions.

“An outright ban is the best strategy from the reef’s perspective,” Mumby said. “But not from the fishermen’s perspective. We wanted to offer managers the option to allow some harvest but also help corals cope with climate change.”

To do that, the researchers used a model, based on empirical data, that they showed was able to accurately predict rising and falling populations in several Caribbean parrotfish species. The researchers also used a second model, which simulates the interactions of parrotfish with coral and seaweed, and the effects of climate change on reefs. 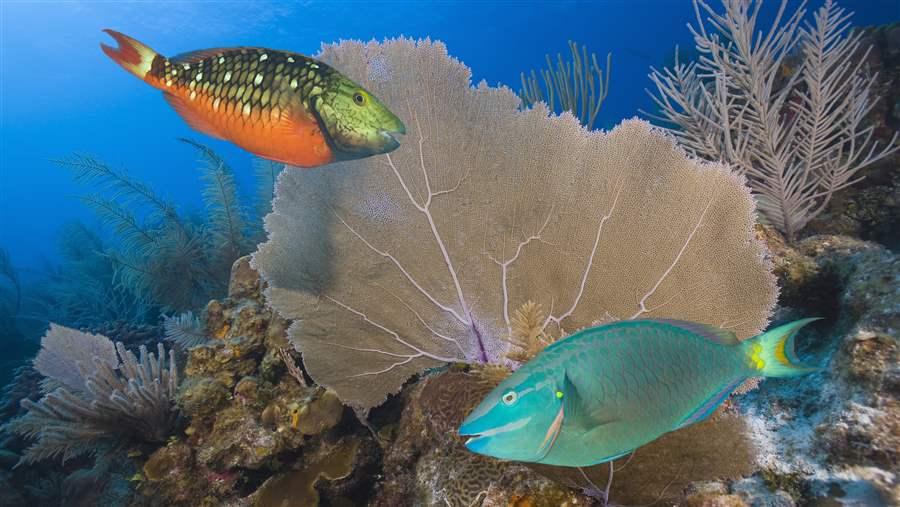 Stoplight parrotfish, such as these two in Belize, are commercially important and help reduce seaweed and algae growth that can make reefs less visually attractive.

The authors found a two-pronged policy might offer superior yield for the fishery and improved coral resilience to climate change. The first prong would prohibit the catch of fish less than 1 foot (30 centimeters) long. The study showed this would increase parrotfish abundance and the productivity of the fishery—a short-term win-win. 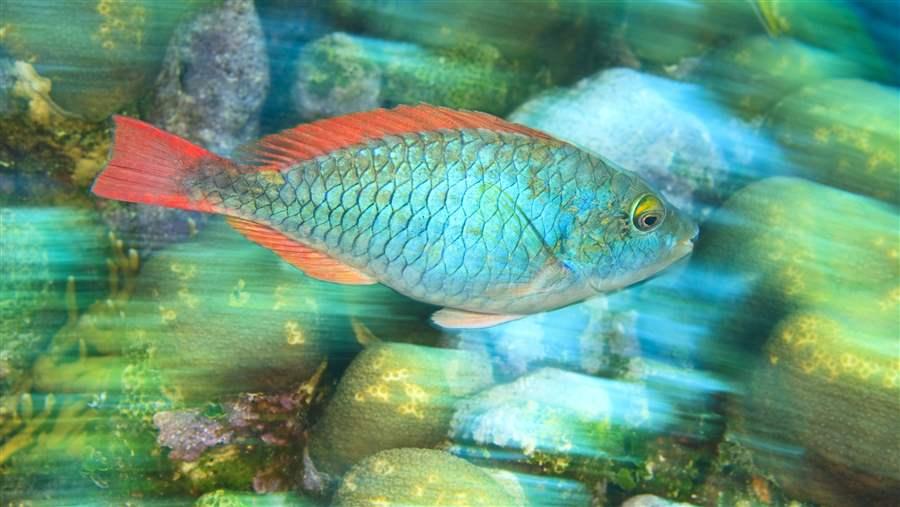 Parrotfish in the Caribbean Sea, such as this redband parrotfish in Honduras, are caught by commercial trapping and spear-fishing. Some countries have banned their catch, but most have few or no restrictions.

However, the simulation model revealed that, to prevent harm to reefs in the long term, catch rates must be kept to 10 percent or less of the fishable stock (fish 1 foot or longer). Without this restriction, fishing might remove so many parrotfish that seaweed would grow over the reef, making it less productive for valuable species such as lobsters, snappers, and groupers. Such growth also makes the reef less visually attractive, which could hamper snorkel and dive tourism.

“These measures alone will not restore the brilliantly diverse reefs many of us remember from the ’70s or ’80s,” Mumby said. “But they can give corals a shot at recovering from disturbances like storms and heat waves and, maybe, time to adapt to the warming that threatens their existence.”

The study, which appeared in the April 19 issue of the journal Proceedings of the National Academy of Sciences, is available here. It requires a subscription until October 2016.