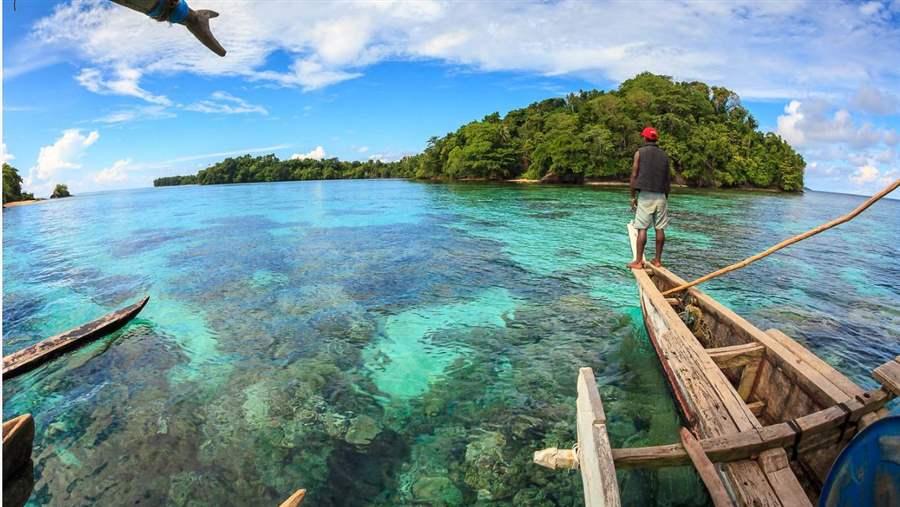 A Titan villager navigates a traditional Melanesian outrigger over the diverse coral reefs around the island of Mbuke in the Manus Province of Papua New Guinea. A recent study found coral reefs around the world with traditional ownership rights and strong involvement by local communities have more fish than expected based on the pressures they face. (Via tanesinclair-taylor.com.)

According to a new study published in the prestigious journal, Nature, scientists have discovered a handful of “bright spots” among the world’s embattled coral reefs that together suggest an improved approach to conservation that includes local involvement in reef management. In one of the largest global studies of its kind, researchers evaluated 2,500 reefs across 46 countries and discovered 15 places where fish were much more abundant on coral reefs than expected.

“Coral reef fish are incredibly biodiverse, and they generate income, food, and other benefits for millions of the world’s poorest people,” said lead author and Pew Marine Fellow Josh Cinner, a professorial research fellow at James Cook University in Townsville, Australia. “Given the widespread depletion of coral reef fisheries globally, we were really excited to find these bright spots that were fairing much better than we anticipated.”

To better understand the factors that determine the abundance of reef fish, Cinner and his 38 co-authors used a technique called “bright spot analysis,” which identifies places that exceed expectations and attempt to understand why. This method has been used in other studies, including one that found novel solutions to the problem of childhood malnutrition in Vietnam by learning what the mothers of poor but well-nourished children were doing differently from other mothers.

First, Cinner and colleagues defined “normal” by examining the survey data to find ecological, social, and economic factors that drive fish biomass (the total weight of fish associated with a reef). They found that the main factors influencing reduced biomass were the size and accessibility of markets for fish. A key driver of increased biomass was the presence of marine reserves with low levels of illegal fishing.

Next, the researchers identified the “bright spots,” which were not necessarily pristine reefs, but rather those that had more fish than would be expected, given the pressures they face.

“We wanted to know why these reefs could ‘punch above their weight’ so-to-speak, and whether there are lessons we can learn about how to avoid the degradation often associated with overfishing,” Cinner said.

Researchers found 15 bright spots, mostly in populated areas of the Pacific Ocean, such as the Solomon Islands, Indonesia, Papua New Guinea, and Kiribati. The study highlights the need for conservation efforts, not only in important pristine areas, but also in places where people and nature co-exist.

What distinguished these bright spots was that the communities had strong local governance systems, such as traditions that limited access by outsiders. They also tended to depend on fishing for food and income. By contrast, “dark spots,”—places that had fewer fish than would be expected, given the pressures they face—tended to be found in communities with fishing technologies that allow for more intensive exploitation, such as fish freezers and potentially destructive netting.

These findings suggest that conservation in populated areas should focus on improving local governance of fisheries, for example by strengthening participation and control of fishing grounds. Specifically, investments that foster community involvement and provide people with ownership rights can foster development of creative solutions that defy pessimistic expectations.

“We believe that the bright spots offer hope and some solutions that can be applied more broadly across the world’s coral reefs,” Cinner said.

Cinner’s next step in his fellowship is to go into bright-spot communities to learn even more about what is working. “We’re hoping to find stories to counter the depressing idea that there’s nothing to do about the global decline of the coral reef fisheries, he said.”