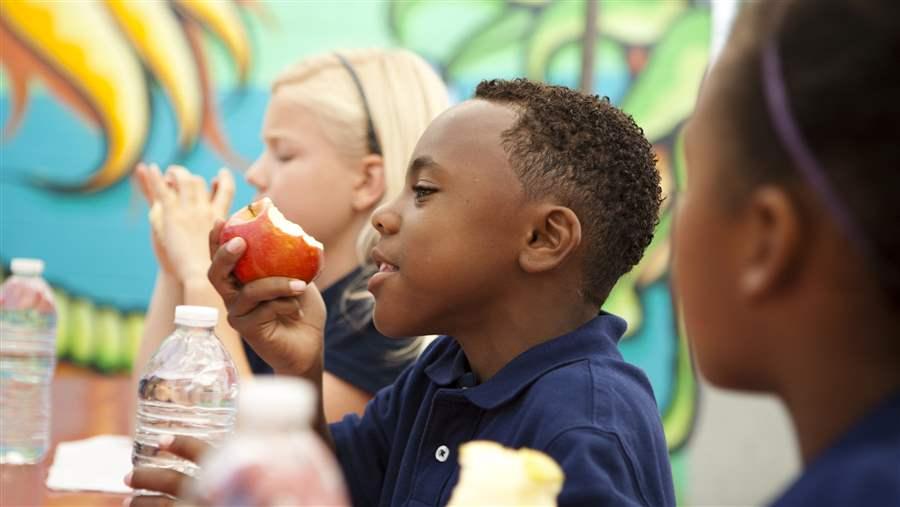 Students get as much as half of their daily calories from food and drinks served in schools, and research shows that more nutritious choices lead to better health and academic success.

All families want to give their kids the gift of good health to help young minds and bodies reach their full potential. In making this wish a reality, parents have a powerful ally in the nation’s schools, especially the federally funded nutrition programs that serve breakfasts, lunches, and snacks to millions of students every day.

Schools nationwide have improved the quality and variety of the foods and drinks they offer in recent years, thanks in part to new policies and increased funding approved by Congress in 2010. That same year, the Robert Wood Johnson Foundation and The Pew Charitable Trusts formed the Kids' Safe and Healthful Foods Project (KSHF) to provide nonpartisan, evidence-based recommendations to help policymakers, school nutrition professionals, parents, and other stakeholders navigate the transition to healthier options for all students.

Today, virtually all schools meet the nation’s stronger nutrition standards, and the project is nearing completion of its research agenda. Here’s a look back at important lessons from our work and other rigorous studies.

The Healthy, Hunger-Free Kids Act of 2010 was a game-changer

In December 2010, Congress passed the Healthy, Hunger-Free Kids Act, reauthorizing federal school meal programs with a focus on improving children’s access to nutritious foods and promoting healthy eating. At the time, the average school lunch was high in sodium, calories from solid fats, and added sugars and low in whole grains. The act directed the U.S. Department of Agriculture (USDA) to undertake the first major changes to school meal nutrition standards in more than 15 years.

About a year later, the USDA finalized those updated nutrition standards, making changes that reflected the 2010 Dietary Guidelines for Americans and the most recent science on children’s daily nutrient requirements. The updated standards require that meals include more fruits, vegetables, and whole grains and only fat-free or low-fat milk. In addition, they set weekly calorie ranges that rise as students get older and limits on the saturated fat and sodium content. By September 2016, nearly all districts were meeting the healthier standards.

The act also directed the USDA to set science-based nutrition standards for snack foods and beverages sold to students during the school day, such as those purchased from vending machines, a la carte cafeteria lines, and school stores. To inform the department’s initial proposal, KSHF conducted a health impact assessment in 2012, which found that children’s access to and consumption of healthy snack items and their participation in meal programs would increase with the implementation of stronger standards. A broad range of education and health groups, including KSHF, then urged the USDA to refine the standards and helped generate nearly 250,000 comments from the public on the proposal. The rule that was subsequently issued, known as Smart Snacks in School, went into effect for the 2014-15 school year, and it fueled the first significant nutritional enhancements to school snacks and beverages in more than 30 years. To meet the requirements, an item must be a fruit, vegetable, protein, or whole grain; have fewer than 200 calories per serving; and be low in fat, sodium, and sugar. The USDA also set healthy limits for beverage serving sizes.

Despite some early challenges, schools have succeeded in improving the nutritional quality of their meals. Students are eating more fruits, vegetables, and other healthy foods, and school meal program revenue has held stable or increased. Moreover, many schools are taking advantage of federal grants and other financing strategies to upgrade kitchen equipment, making it easier to prepare more nutritious and delicious meals. 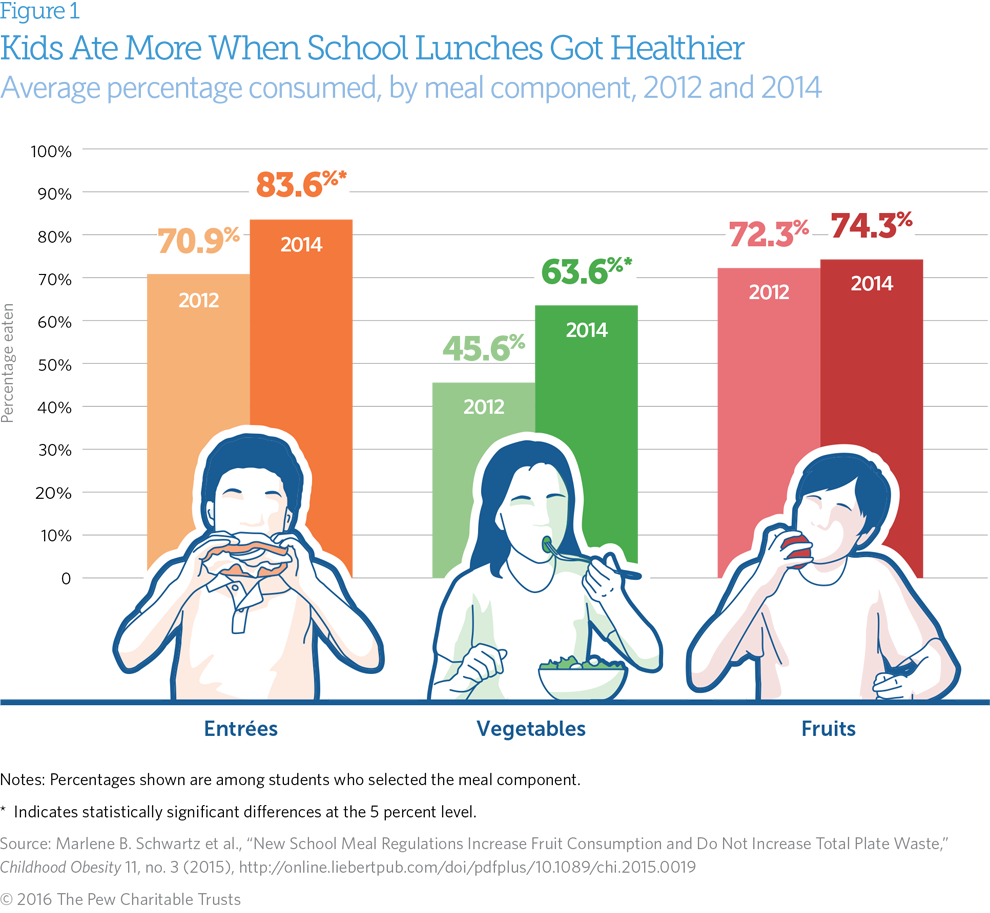 Since the updated meal standards were implemented, students of all ages are choosing lunches higher in nutritional quality with fewer calories per gram and consuming more fruits and larger portions of their entrees and vegetables. (See Figure 1.) Studies of schools in three states showed considerable improvements in children’s eating habits under the USDA’s updated meal standards. Some of these same reports also measured plate waste—the food taken and later discarded by kids—and found that it either stayed the same or declined after the transition to healthier menus.

Polls conducted by KSHF nationally and in 14 states found that most voters with school-age children are concerned about kids’ health and support the changes introduced by Congress and the USDA. Nationwide:

Voters also favored district practices that encourage healthy behaviors. The project’s polls in Louisiana, Ohio, and North Carolina asked about school fundraisers, and most respondents said they preferred activity-based events such as car washes or walk-a-thons to food-focused events. On-campus sales of baked goods or items such as pizza and candy during the school day were among the least favored fundraisers.

A nationally representative survey of school nutrition directors commissioned by KSHF at the end of the 2014-15 school year found that most meal programs use a mix of strategies to encourage students to eat nutritious meals. Nine in 10 adopted at least one practice to raise children’s fruit and vegetable consumption. For example, almost two-thirds of directors who increased the use of salad bars said kids ate more produce as a result. Directors also said that holding taste tests with students and redistributing uneaten, sealed foods were among the most effective ways to reduce waste. 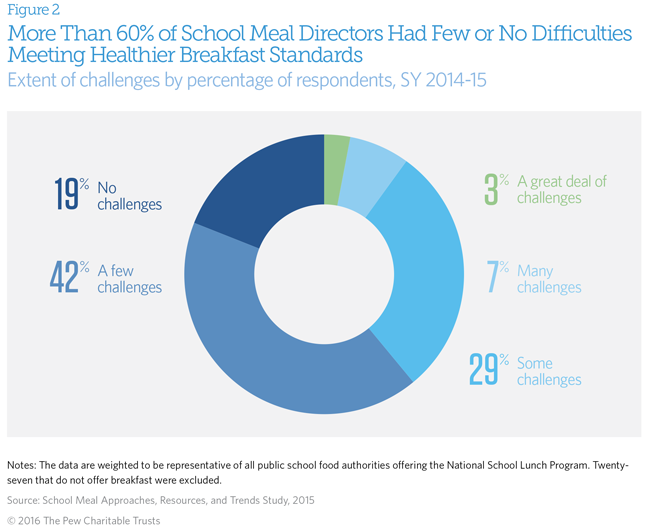 The same survey reported that 84 percent of directors saw rising or stable revenue from their combined meal reimbursements plus snack and beverage sales in school year 2014-15 compared with a year earlier. More than half of respondents reported higher combined revenue, and almost a third said total revenue remained level. (See Figure 2.) Among directors who cited financial concerns, equipment and labor costs were most frequently mentioned.

Aging kitchen infrastructure and equipment, much of it designed to heat or handle prepackaged rather than fresh foods, pose significant barriers to school districts’ efforts to meet updated nutrition standards and adapt to the tastes and dietary needs of today’s students. Aging equipment is also costly to repair and typically uses greater energy than more modern equipment.

In December 2013, another KSHF survey found that most school meal programs (88 percent) needed one or more pieces of equipment to help them meet nutrition standards, but only 42 percent of respondents reported that they had funding for capital purchases, and less than half of those had a budget that was adequate to meet their equipment needs. Fortunately, between 2009 and 2016, Congress appropriated nearly $200 million for USDA kitchen equipment grants, which helped thousands of schools purchase needed upgrades.

A 2015 KSHF-commissioned series of case studies of 19 schools in seven states explored the effects of these federal kitchen equipment grants on students and meal programs and found that equipment bought with these funds helped many schools overcome challenges reported in the 2013 study. Just one new piece of equipment helped schools improve nutritional quality and variety, entice more students to eat school meals, and operate more efficiently and cost-effectively.

In 2013, in recognition of the need for a sustainable and predictable funding mechanism to support ongoing school kitchen improvements, lawmakers introduced the bipartisan School Food Modernization Act to permanently authorize a USDA kitchen equipment grant program and provide loan assistance for eligible schools. Committees in the House of Representatives and Senate added these provisions to their respective bills to reauthorize child nutrition programs in 2016. Although neither became law before the 114th Congress ended Jan. 3, policymaker support for school kitchen equipment is clearly growing.

Taken together, these facts tell an unmistakable story of transformation in the nation’s schools. Cafeterias, vending machines, school stores, and fundraisers are fueling healthier lives for millions of children. Backed by evidence-based policy and funding decisions, school nutrition professionals, advocates, students, and families have driven this progress, and in seven years, they have fundamentally remade school meal programs for America’s kids. And even more exciting, it’s clear that this movement is just getting started.