As school food authorities work to implement the USDA's new meal standards, they may face challenges, including limitations in existing kitchen equipment and infrastructure, and in the training and skills of food service staff. This is the first of a series of reports summarizing how schools are putting in place the USDA standards and what challenges they face before they can reach full implementation.

Over the past four decades, the obesity rate among children and adolescents ages 6 to 19 has more than tripled.This has increased the risk of young people developing health problems such as cardiovascular disease, depression, high blood pressure, Type 2 diabetes, breathing problems, sleep disorders, and high cholesterol. More than 31 million U.S. children participate in the National School Lunch Program each school day, and many students consume up to half of their daily calories at school. As a result, schools have the potential to help reverse the national childhood obesity epidemic.

In January 2011, the U.S. Department of Agriculture, or USDA, proposed updated nutrition standards for school meals to align them with the 2010 Dietary Guidelines for Americans and current information on children's nutrient requirements. USDA's standards call for schools to offer more fruits, vegetables, and whole grains, and to serve only fat-free and low-fat milk. In addition, the standards place limits on calorie and sodium levels, and eliminate foods with trans fatty acids, or trans fats. Schools were required to implement the new standards for lunches in school year, or SY, 2012-13 and for breakfasts in SY 2013-14.

As school food authorities,* or SFAs, work to implement the new meal standards, they may face challenges,including limitations in existing kitchen equipment and infrastructure, and in the training and skills of food service staff. In January 2012, the Kids' Safe and Healthful Foods Project—a joint initiative of The Pew Charitable Trusts and the Robert Wood Johnson Foundation—began conducting the first national study to assess the needs of SFAs. The Kitchen Infrastructure and Training for Schools study examined challenges SFAs encountered in implementing the new meal requirements under the National School Lunch Program, and collected data on their reported needs for new equipment, infrastructure changes, and staff training.

The findings presented in this report are based on a self-administered, online survey of school food service directors or their designees (primarily food service managers) from a nationally representative sample of the administrators of public school food authorities.

* A school food authority is the local administrative unit that operates the national school breakfast and lunch programs for one or more school districts.

As schools work to implement the updated USDA standards for school meals, the menu changes will require changes to other food service operations, including purchasing, receiving, and storing food, and preparing and serving meals. Each function has its own labor needs and requires equipment, as well as physical space and other infrastructure upgrades such as updated electrical, plumbing, and ventilation systems, needed to operate that equipment. The additional 6 cents per lunch under the Healthy Hunger-Free Kids Act is intended to help cover additional food costs associated with offering meals with more fruits, vegetables, and whole grains. However, the immediate challenges faced by some school food authorities involve more than just the increased cost of food. 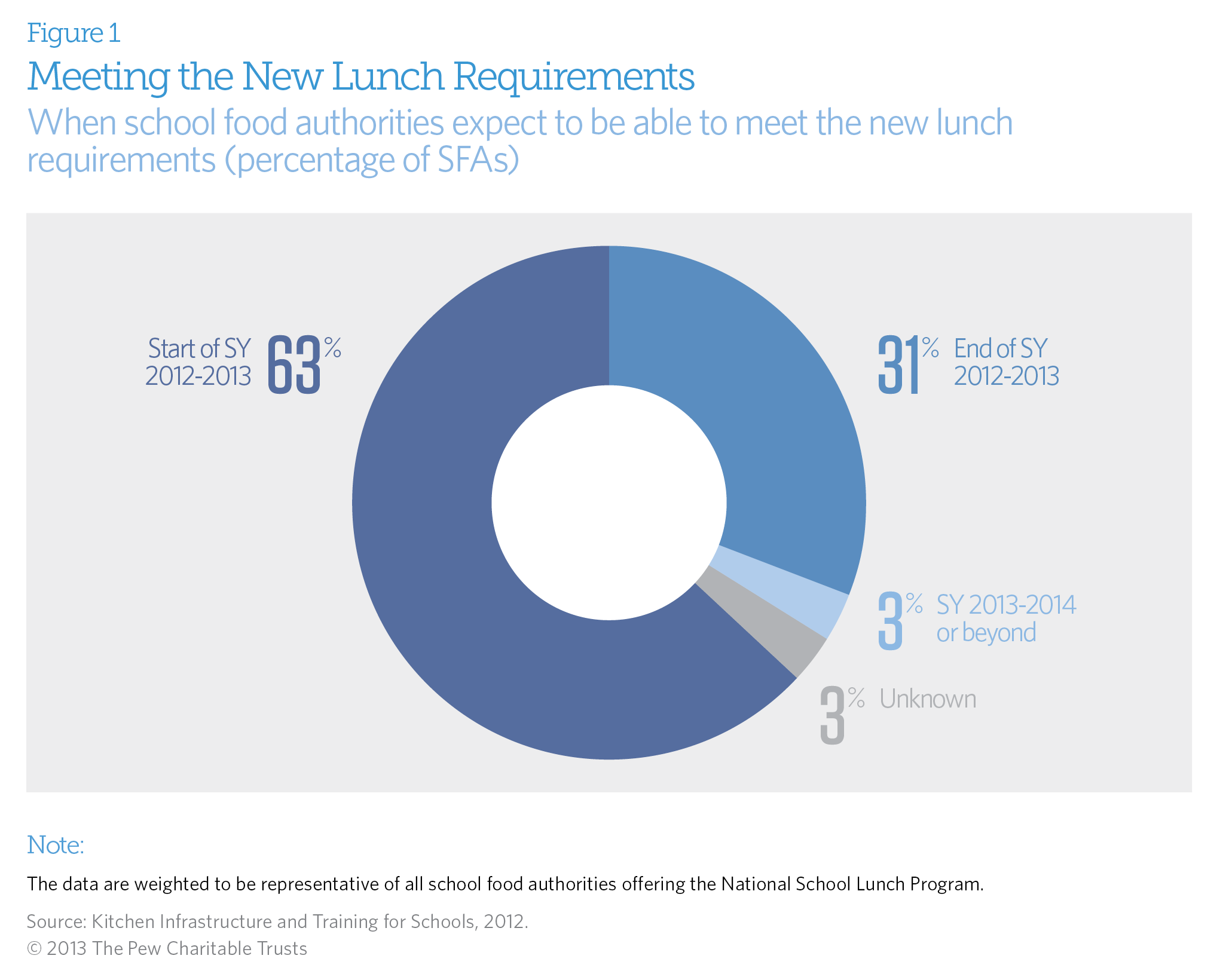 Although overall most school food authorities expected to meet the new standards by the end of SY 2012-13, readiness varied by type of SFA. (See Table 1.) Those that were most likely to expect to meet the new requirements at the start of SY 2012-13 were those that were medium, large, or very large; urban or suburban; in the mid-Atlantic region; or in districts that fall within the high poverty category. SFAs that were very small or located in rural districts, the Mountain Plains regions, or districts within the low poverty category were least likely to report that they would be ready at the start of SY 2012-13.

To successfully implement the new lunch requirements, many schools planned to change their approach to meal production. Respondents were asked about four potential changes:

Overall, 90 percent of SFAs had made or expected to make at least one change in production approach in an effort to meet the new meal requirements. (See Appendix Table A.3.) The vast majority of school food authorities (80 percent) reported that they had implemented or would implement standard recipes and/or work methods.* (See Figure 2.) Just over half (55 percent) had moved to or expected to move to more scratch cooking,† which could mean schools would need more equipment and space to prepare meals on-site and store fresh ingredients. Twenty-eight percent of SFAs had moved or expected to move to buying more ready-to-eat foods from vendors. Finally, very few (3 percent) expected to move to a central kitchen/commissary or production kitchen in order to meet the new meal requirements. 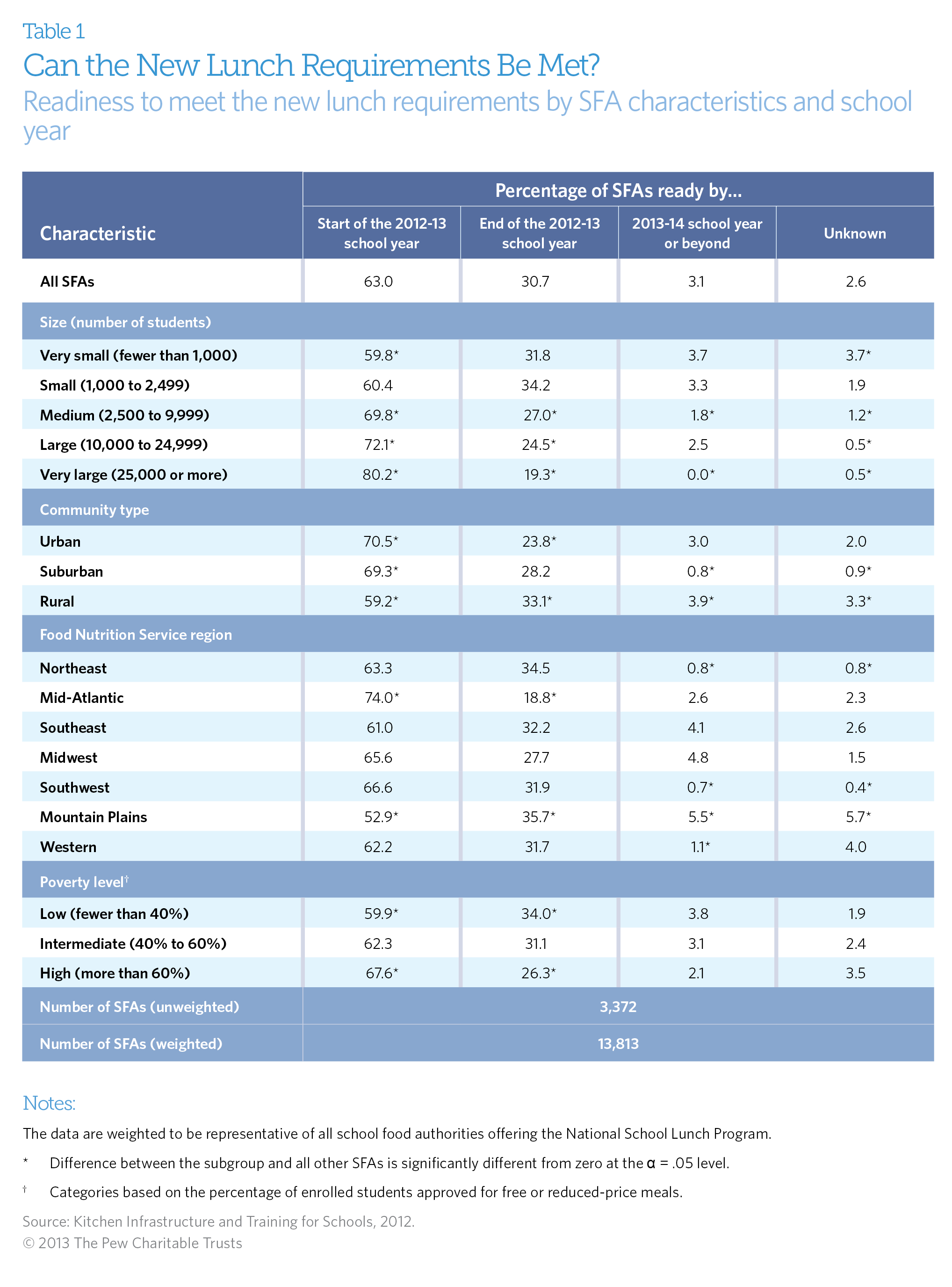 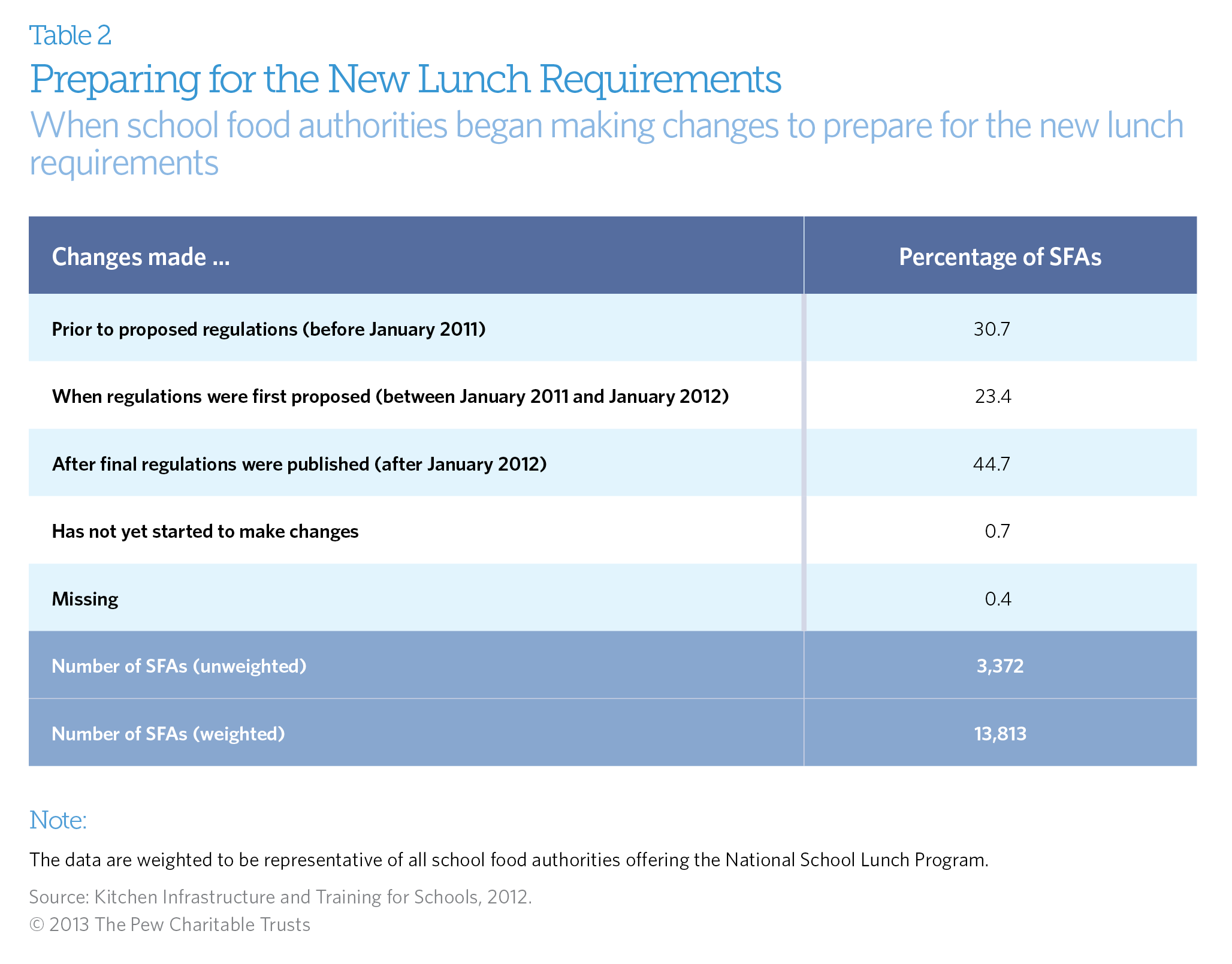 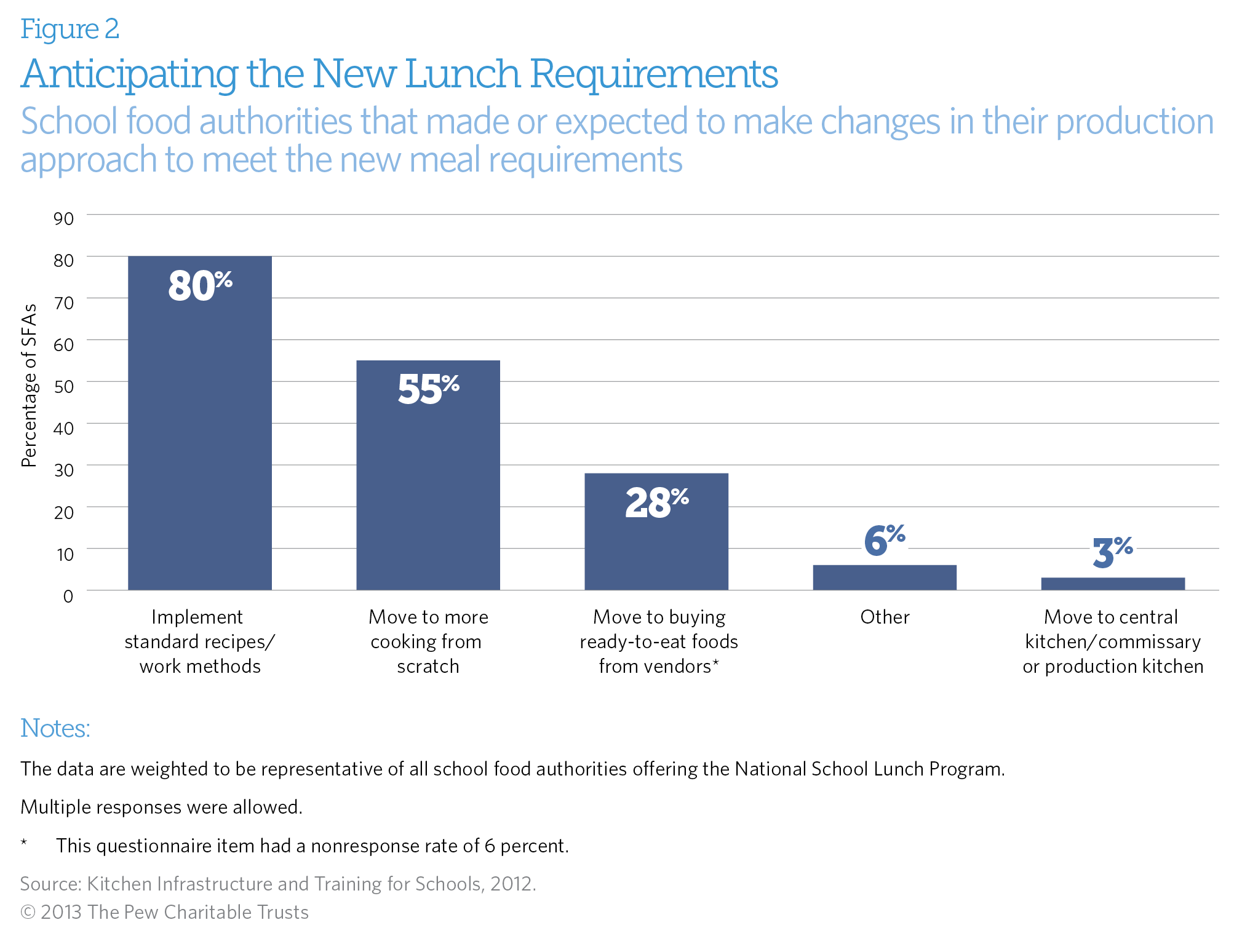 With the vast majority of districts expecting to meet USDA's updated lunch standards within the first year of implementation, it is evident that these standards are achievable. This conclusion is reinforced by the fact that by the end of SY 2012-13, more than 70 percent of school districts had applied for certification of their compliance with updated meal standards.10 However, serving healthier meals does require some adaptations in food service operations that have been a challenge for many districts. Many school food authorities indicate that they could be serving healthy foods more efficiently and effectively if they had the proper equipment and infrastructure, and if their staff members were trained accordingly, making them less reliant on unsustainable workarounds. Thus, it will be important to better understand what is needed in terms of additional equipment and infrastructure upgrades, and how to ensure staff is well-trained and prepared to serve safe, healthy, and appealing meals that students across the country can enjoy. The next reports on the study will address these issues in greater detail.

4 M. Story, “The Third School Nutrition Dietary Assessment Study: Findings and Policy Implications for Improving the Health of US Children,” Journal of the American Dietetic Association 109, no. 2 (2009): S7–S13.

10 U.S. Department of Agriculture, Food and Nutrition Service, with the National Food Service Management Institute (NFSMI). 2002a. A Guide to Centralized