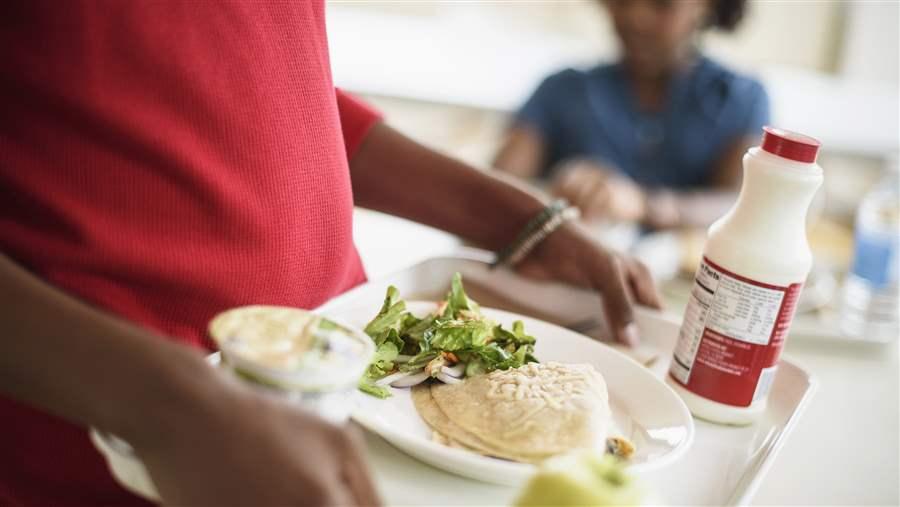 School meal programs and the individuals who run them have come under intense scrutiny in recent years as they planned for and implemented the U.S. Department of Agriculture’s healthier standards for foods and drinks offered to the nation’s students. But it is not just breakfast and lunch menus that have changed; vending machine options, a la carte lines, food-based fundraising practices, and more are being improved to meet the updated school nutrition rules that began to take effect in the 2012-13 school year (SY).

Studies of schools in three states—Connecticut, Texas, and Washington—show that under the updated standards, children’s eating habits are improving, which is a core goal of these strengthened policies. Students of all ages are choosing lunches higher in nutritional quality and lower in calories per gram and consuming more fruits and larger shares of their entrees and vegetables. Some studies also measured plate waste—the food taken and later discarded by kids—and found that it stayed the same or declined after the transition to healthier menus.

This report explores the survey results on SFA directors’ perspectives on meal and snack nutrition requirements and on districts’ experiences implementing the updated standards near the end of SY 2014-15. It reveals that many districts have emerged from the most challenging phase of the transition to healthier meals. The key findings from the survey are: 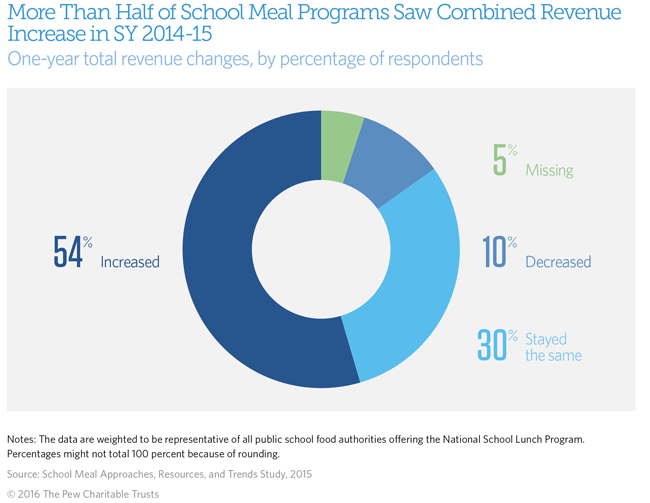 Panelists agreed that healthy eating behaviors are best promoted through active strategies, such as cooking demonstrations and taste tests with students and working with administrators to change the cafeteria environment or lunch schedules.

Reflecting on these results, the expert panel noted that running a school nutrition program is analogous to running a successful business: Directors reported constantly updating and expanding their menus and employing creative strategies to keep their customers—the students—happy. Sharing recipes, vendors, and purchasing responsibilities across schools and districts has helped them successfully navigate the transition to healthier meals, and buy-in from administrators and parents was also vital to success.

Panelists agreed that healthy eating behaviors are best promoted through active strategies, such as cooking demonstrations and taste tests with students and working with administrators to change the cafeteria environment or lunch schedules so students have enough time to eat. They also said that celebrating their accomplishments through local media and direct outreach to school officials, families, and the community generated positive perceptions of the program and support for efforts to serve healthier foods to students.

This report describes the survey findings and panelists’ insights and offers recommendations to states, districts, vendors, families, and communities to enhance meal programs’ success in implementing updated nutrition standards and encouraging healthy eating among students. By prioritizing nutrition as part of a culture of health in educational settings and in funding and policy decisions, policymakers can ensure that students have access to nutritious food. At the same time, nonprofit and for-profit organizations, as well as parents, can build a network of community support for school meal programs and their critical role in children’s lifelong health.

WASHINGTON&mdash;School food service directors are using a mix of strategies&mdash;three, on average&mdash;to encourage students to eat healthy meals and snacks, and many see few or no remaining challenges to implementing updated breakfast and lunch nutrition standards. The findings come from a new report from the Kids&rsquo; Safe and Healthful Foods Project, a collaboration between The Pew Charitable Trusts and the Robert Wood Johnson Foundation.