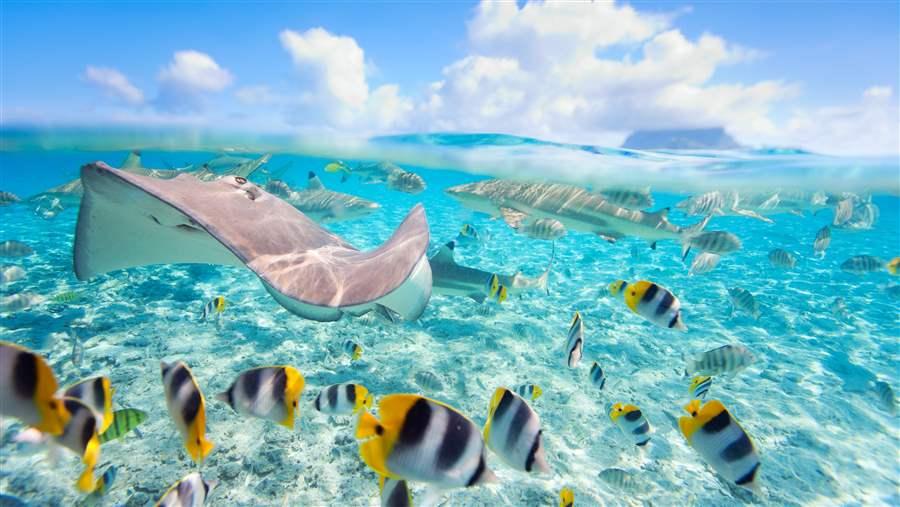 The rich waters surrounding French Polynesia, a French overseas territory in the South Pacific, are home to 21 species of sharks and 1,024 of fish.

As caretaker to over 11 million square kilometers (4.2 million square miles) of ocean—the second-largest exclusive economic zone in the world—France has a tremendous opportunity to become a global leader in safeguarding the world’s seas. While the country has an impressive coastline in continental Europe, most of its waters surround French overseas territories in the South Pacific and Indian oceans, the sub-Antarctic region, and the Caribbean Sea. It is around these islands where France could significantly improve ocean health by establishing large, fully protected marine reserves.

Some French territories are already moving in a positive direction: the five inhabited islands of French Polynesia’s Austral archipelago last year submitted a proposal to the central government in Tahiti for a 1 million-square-kilometer (400,00-square-mile) reserve, and in February, public consultation started on how regions of the Natural Park of the Coral Sea in New Caledonia should be used.

The ocean covers more than 70 percent of the Earth’s surface, provides refuge for vulnerable species big and small, is a critical food source for billions of people, and supports fishing and tourism businesses worth billions of euros annually.

But negative effects from human activities are increasingly threatening all of these benefits. As frontline professionals working on marine conservation and passionate ocean advocates, both of us have seen these effects firsthand: dead and dying coral reefs, excessive marine debris, mammals ensnared in abandoned fishing gear, reduced catches by artisanal fishermen, and more.

At the same time, we have seen highly protected marine reserves, in which fishing and all other extractive or damaging activities are banned, help build ecosystem resilience and conserve species and habitats in marine waters around the world.

Recognizing the urgent need to increase the area of protected ocean, and the outsize role France could play in that quest, The Pew Charitable Trusts organized – in collaboration with the Oceanographic Institute – a One Ocean: Issues and Solutions conference in Paris in November 2016 to bring together prominent French scientists, global marine policy experts, and politicians who are leading the fight against the overexploitation of our seas. 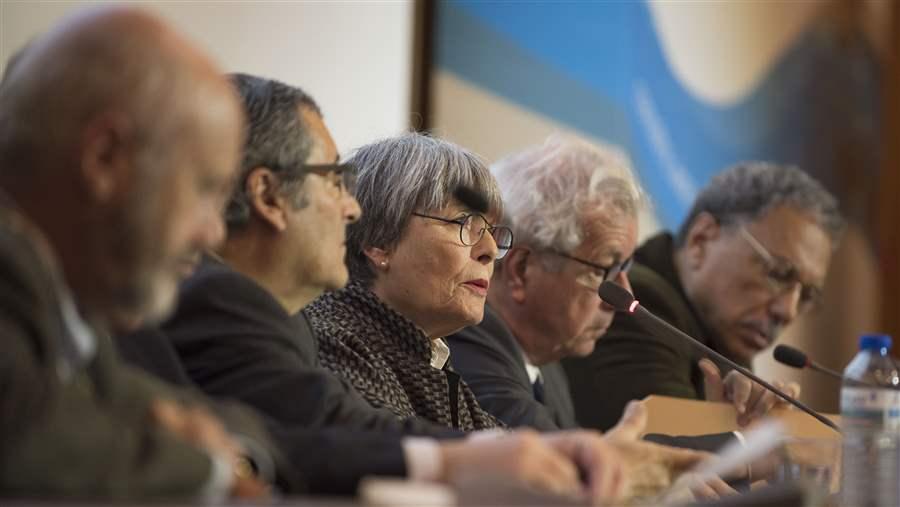 Speaking on a panel at the conference, Daniel Pauly, lead scientist of the Sea Around Us initiative at the University of British Columbia, said protecting ocean ecosystems through the establishment of large, fully protected reserves would help prevent global fish stocks from collapsing.

“The pressure on the world’s fish stocks is relentlessly increasing,” Pauly said. “Consequently, global fisheries catches have been steadily declining since 1996.” Fully protected marine areas, he added, can help reverse that trend.

Gilles Boeuf, special adviser to French Ecology Minister Ségolène Royal, had a more ominous warning for the audience: “Without the ocean, there is simply no future for mankind.” 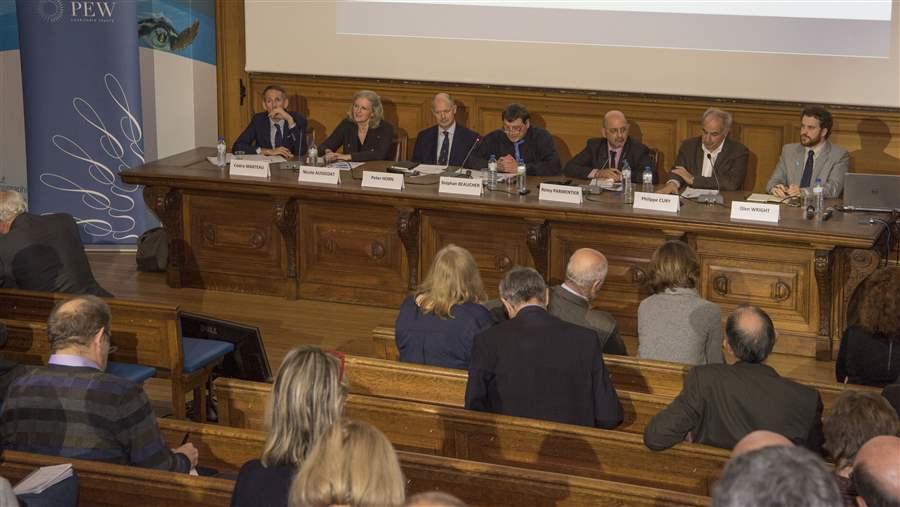 Philippe Cury, senior scientist at France’s Institute of Research for Development, noted that deep-sea bottom trawling “has nearly destroyed everything” in the Mediterranean Sea, one of many areas of the global ocean where fishing has declined drastically because so few fish remain. Cury added that marine reserves can mitigate the effects of climate change and promote adaptation by reducing other environmental stresses, such as industrial fishing. 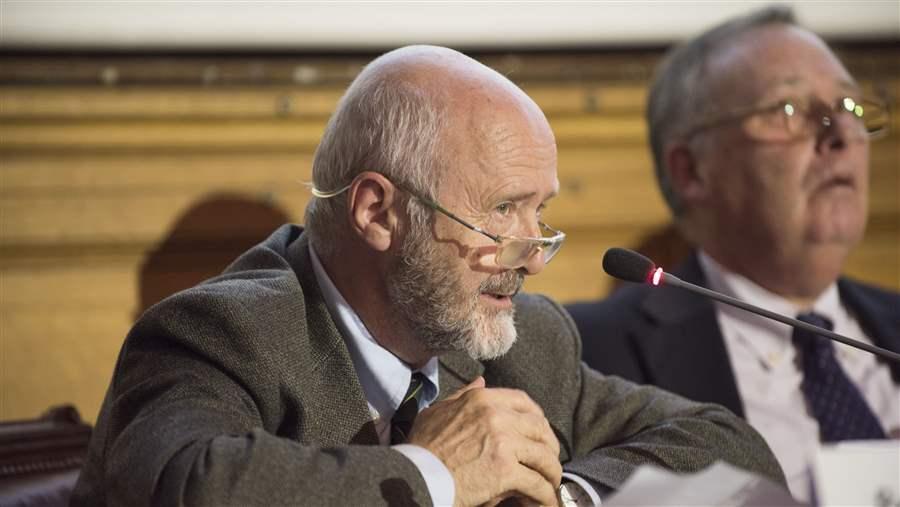 Very large reserves “make it possible to reconstruct entire ecosystems,” says Brice Lalonde, left. With him is Serge Ségura, the French ambassador for the ocean.

Under the leadership of Royal, the ecology minister, France extended its sub-Antarctic nature reserve in December, quintupling the percentage of French waters that are highly protected, to 1.3 percent. Royal also recently announced the creation of a marine protected area in the territorial waters around Clipperton Island, a French territory in the Pacific Ocean about 1,000 kilometers (650 miles) west of Mexico.

In a further sign of support for expanding marine protections, Brice Lalonde, French environment minister from 1988 to 1992, told the conference that very large reserves “are starting to work” and that they “make it possible to reconstruct entire ecosystems.” He also noted that technology is making it easier to monitor remote reserves, a particularly helpful aid in the fight against illegal fishing.

While we applaud the progress to date, we also encourage French leaders to act now to continue preserving vast marine areas around the country’s overseas territories for future generations. Given the threats pressing on the global ocean, this opportunity may soon be lost, and with it France’s chance to leave a national ocean legacy that would benefit people, economies, and marine species around the world.