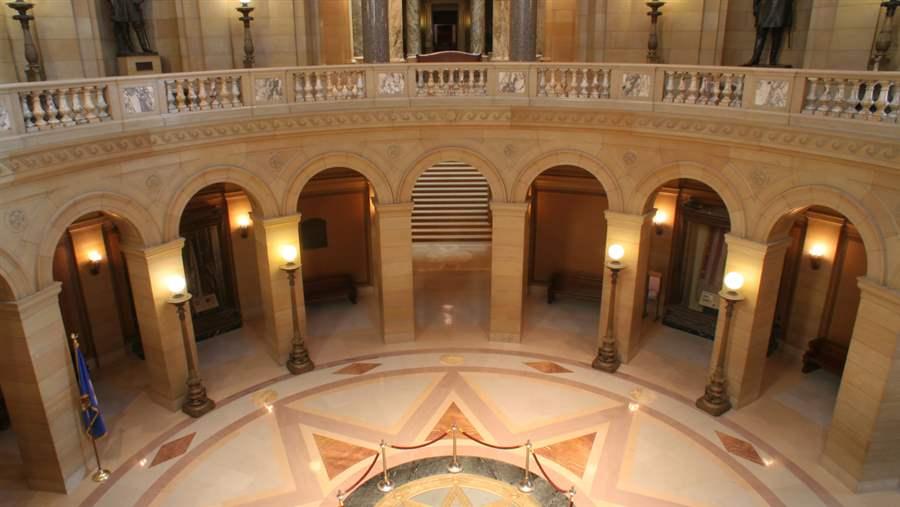 In a new report, the Pew-MacArthur Results First Initiative names Minnesota as one of five leading states in evidence-based policymaking. These top states—Washington followed by Utah and Minnesota with Connecticut and Oregon tied for fourth—have consistently pursued key actions to incorporate evidence (findings from program evaluations and outcome analyses) into policy and budget decisions. The report assessed all states based on the presence and sophistication of these actions in four human service policy areas—behavioral health, child welfare, criminal justice, and juvenile justice. Download the full report.

Minnesota is an exemplar in using policy tools to identify what works in improving outcomes for the state. Examples include the use of two tools—the University of Cincinnati’s Correctional Program Checklist (CPC) and the Results First cost-benefit model.

In 2015, seven Minnesota counties, the state Department of Corrections, and the state Office of Justice Programs formed the Minnesota Correctional Program Checklist Collaborative to help state and local corrections offices more effectively implement evidence-based practices and build better relationships with program providers and clients. The collaborative uses the CPC tool to assess the extent to which state, county, and community-based nonprofit correctional programs adhere to evidence-based practices, a challenge that many state and local governments encounter. To date, 67 programs have been assessed and scored. Of those, 12 were reassessed and showed improved adherence to evidence-based practices.

“The tool has really given us a way to talk with providers and look at how we can help them improve their programs. It’s about building relationships and continuous improvement, not punishment,” said Stephanie Ahles, principal planning analyst with the Hennepin County Department of Community Corrections and Rehabilitation. The collaborative meets bimonthly to share lessons learned, ensure that checklist assessors are reviewing programs consistently and with fidelity to the original design, and to build relationships with assessors across the state because assessment teams are formed from a variety of agencies.

Also in 2015, as a result of bipartisan legislation, the state partnered with Results First to develop detailed inventories to categorize programs on their evidence of effectiveness and cost-benefit analyses to estimate programs’ expected returns on investment. This effort, led by the Minnesota Management and Budget office (MMB),  is being undertaken in criminal justice, adult and children’s mental health, substance abuse, juvenile justice, and child welfare, and seeks to improve the state’s choices when allocating public resources. The first inventories and cost-benefit analyses were released for adult corrections and adult mental health at the end of 2016.

To facilitate transparency, trust, and use of findings from this effort, the state established an advisory committee that consists of executive, legislative, judicial, and county representatives who serve two-year terms and meet quarterly. On behalf of the committee, MMB conducted a survey of state and local policymakers in spring 2016 to gauge interest in using evidence from the Results First tool and to set a baseline to assess future impact. Ninety percent of respondents indicated that having good information on program effectiveness to inform budget and policy decisions was very important, yet 59 percent indicated that they were only somewhat satisfied with the information they currently had available. MMB officials say the Results First model can help fill this vacuum, and they plan to conduct this survey annually as a barometer of how well the model’s findings are understood, trusted, and used.

“Minnesota’s Results First model offers strong data on cost-effectiveness and program quality, informing the work of county and state policymakers and helping us to provide the most efficient and effective services to Minnesotans,” said Myron Frans, MMB commissioner.

Minnesota’s commitment to evidence-based policymaking can serve as a model for other states seeking to enhance their ability to make informed choices that will result in better outcomes for residents.