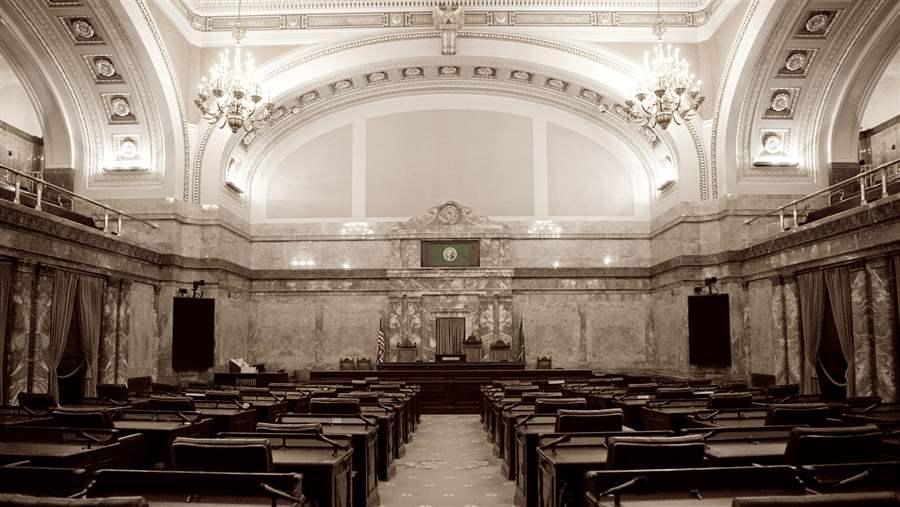 In a new report, the Pew-MacArthur Results First Initiative names Washington as one of five leading states in evidence-based policymaking. These top states—Washington followed by Utah and Minnesota, with Connecticut and Oregon tied for fourth—have consistently pursued key actions to incorporate evidence (findings from program evaluations and outcome analyses) into policy and budget decisions. The report assessed all states based on the presence and sophistication of these actions in four human service policy areas: behavioral health, child welfare, criminal justice, and juvenile justice.

Washington is nationally recognized for its routine engagement in evidence-based policymaking. In 1983, the Legislature created a nonpartisan research organization, the Washington State Institute for Public Policy (WSIPP), with a mandate that includes identifying ways to improve outcomes for state residents. In 2007, the Legislature also created the Evidence-Based Practice Institute, which offers training on evidence-based programs, and has worked with WSIPP to develop and standardize the meaning of “what works” in social policy areas.

State human services departments have demonstrated their commitment to this approach by tracking and reporting the percentage of funding going to evidence-based and/or research-based programs in recent budget cycles. In addition, a recent law requires that 85 percent of funding appropriated toward behavioral health services for students go toward evidence- or research-based programs.

What makes Washington stand out is how it leverages its internal research hubs such as WSIPP, which has been at the center of many of the state’s evidence-based policymaking actions. When the state passed the 1997 Community Juvenile Accountability Act, one of the first in the nation to require that state-funded interventions be “compatible with research,” it directed WSIPP to develop standards for measuring whether a juvenile intervention is effective. Statewide, this helped to standardize the meaning of what works in reducing recidivism among juvenile offenders and to ensure that entities administering interventions are choosing programs proven through rigorous research to achieve outcomes cost-effectively.

Washington’s Legislature frequently directs WSIPP to research what programs are effective in achieving policy goals across various human service areas. When a 2012 law instructed WSIPP, in collaboration with other state entities, to prepare an inventory of evidence-based programs in the area of child welfare, juvenile rehabilitation, and children’s mental health, analysts conducted a meta-analysis of national and international studies and produced a report for policymakers that included a menu of programs identified as evidence-based, research-based, or promising. The state’s Department of Social and Health Services has used the findings to increase the number of youth accessing evidence-based mental health services and to strengthen its accountability processes so that training, data systems, and monitoring promote programs’ fidelity to their original models. The institute periodically updates these inventories as more research becomes available.

WSIPP analysts use findings from their meta-analyses to monetize the costs and benefits of implementing those interventions and produce reports that rank programs by the relative value they would generate for taxpayers. For instance, a recent analysis of evidence-based adult mental health programs showed that cognitive behavioral therapy for adult depression can produce up to $50 in taxpayer and societal benefits for every $1 invested if properly implemented.7 These analyses, which are trusted for their rigor and objectivity, have enabled the Legislature and agency leaders to direct funding to cost-effective programs. Since the 1990s, policymakers have used the results to inform program investments in numerous social policy areas, including behavioral health, child welfare, criminal justice, education, and juvenile justice.

Washington state’s long-term commitment to evidence-based policymaking serves as an exemplar for other states that want to replicate this approach and achieve better long-term outcomes for taxpayers.