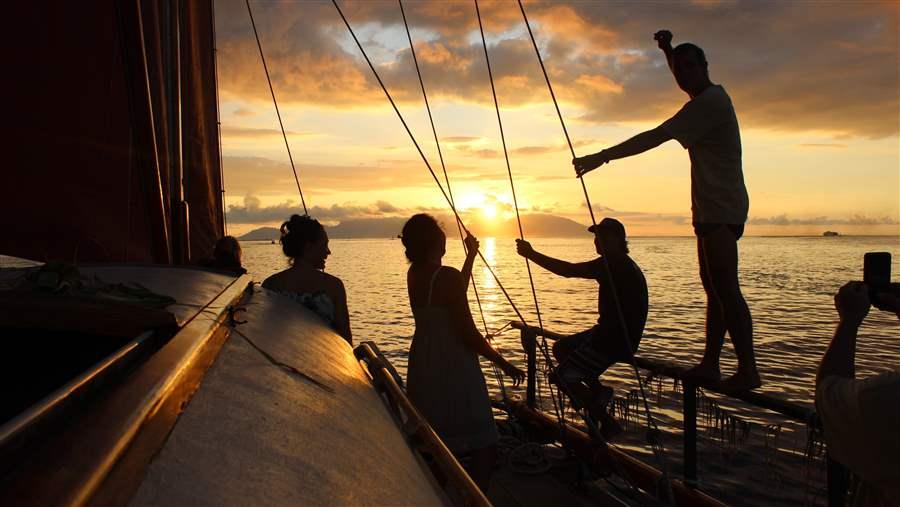 Jérôme Petit directs Pew's Global Ocean Legacy campaign in French Polynesia in the South Pacific. Working out of Papeete on Tahiti, Petit supports the effort by Austral Islands municipalities to create a 1 million-square-kilometer (386,000-square-mile) marine reserve in their waters.

1. What activities does Pew conduct in French Polynesia?

Pew's Global Ocean Legacy project aims to help with creation and management of large, fully protected marine reserves around the world. In 2014, the government of French Polynesia committed to create a 1 million km2 marine reserve in Austral Islands during an international conference. The same year, the five municipal councils of the Austral Islands approved a declaration that officially called for the creation of a large marine reserve in their waters. Pew has backed the effort by taking part in town halls sponsored by the municipalities and meetings with French Polynesian officials. At the request of the French Polynesian government, we have supported scientific expeditions in the Australs, as well as research into the biodiversity and culture of the islands. We helped compile the first-ever comprehensive scientific and cultural study on the marine environment of the islands, and in working with local communities, we are documenting the resurgence of rāhui, the Polynesian practice of conservation that restricts fishing in an area or for a species.

2. Why is it necessary to create marine reserves?

The world's oceans are in crisis. They face many threats, including overfishing, pollution, climate change, and acidification. This is serious because 1 billion people depend on the ocean as their primary source of protein.  According to the United Nations Food and Agriculture Organization, about 90 percent of fish stocks globally are fully exploited, overexploited, or even depleted. Fishing efforts are going deeper into new areas in search of remaining healthy stocks, and that makes already vulnerable populations only more so. Pacific Bluefin tuna, for example, has experienced a 96 percent reduction in its population from unfished levels. Bigeye tuna populations are down 84 percent, yellowfin tuna 62 percent, and albacore 60 percent. Actions taken by the multination tuna commissions have so far proved insufficient to counter declining stock health. But setting aside vast areas where fish can grow and reproduce to regenerate stocks can help reverse these trends. Fisheries benefit directly from these reserves, because some fish eventually move outside the reserve into unprotected waters; this is called spillover. Leading scientists and the International Union for Conservation of Nature recommend strict protections for at least 30 percent of marine habitats. 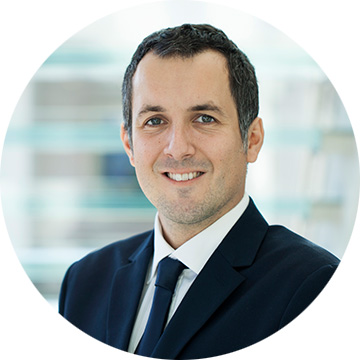 Numerous scientific studies show that large marine reserves are effective in protecting pelagic stocks—those that live in the open sea. Indeed, species such as bonito, swordfish, and yellowfin tuna may not be as mobile as once thought. According to a 2003 article in the Marine Policy journal, a majority of these species, known as "lazy fish," stay within an area about 200 miles in diameter, while a minority travel longer distances. The threatened species can be effectively protected by large reserves. Experts also speak of "cryptic biomass" in lightly fished areas. This means that stocks growing in these waters act as hidden reservoirs, essential for the regeneration and health of the pelagic populations. In addition, the life expectancy of pelagic species—and their reproductive capacity—increases if they have the protections of a marine reserve. Even fish that leave the reserve and are caught by fishermen will have had more time to mature and produce offspring. If they are large enough, marine reserves help conserve these species and minimize the risk of population collapse.

4. Why focus on fully protected reserves instead of marine managed areas with fishing quotas?

It is scientifically proven that fully protected marine reserves are much more effective than managed areas in preserving stocks and biodiversity. A recent analysis published in Nature looked at 87 marine protected areas around the world and found that the characteristic most critical to effectiveness was full protection. Fully protected areas are much easier to enforce than marine managed areas, because any vessel fishing in fully protected waters is doing so illegally. It is also more equitable to have designated protected areas closed to everyone for the benefit of the whole community, rather than allowing access to certain people through fishing quotas.

5. Why create a large marine reserve in the Austral Islands?

The Austral Islands enjoy great structural diversity, including high islands, raised atolls, and seamounts, as well as a unique location between tropical and temperate climates. That means they host a variety of exceptional marine species, with many found nowhere else. Because fishing for pelagic species accounts for less than 2 percent of all longline fishing in French Polynesia, stocks in these waters are relatively well-preserved. The area is what scientists would call a cryptic biomass (as explained above). And that is key to the regeneration of pelagic populations for French Polynesia and the Pacific more broadly. These features make the Austral Islands a site of global significance for conservation. Moreover, the preservation of natural resources is fully consistent with the cultural traditions of the Australs. The island of Rapa, in particular, is known for the practice of rāhui.

6. Why create a reserve in an area that faces limited human pressures?

The world has few untouched fish stocks left—only about 10 percent—and maintaining an existing protected area can be socially and politically easier than reducing pressures on an overexploited one. In addition, recovering the health of the ocean is significantly more difficult and can take generations in areas where stocks are already depleted. Global Ocean Legacy focuses its efforts on the world's last relatively pristine areas. Though safeguarded by their circumstances today, their protection cannot be guaranteed for the long term. Commercial pressures are growing, and areas not yet protected could be exploited or overexploited in the future. Only the creation of marine reserves can ensure the long-term protection of these intact ecosystems.

7. How do the people of the Austral Islands feel about the marine reserve proposal?

The push for a marine reserve is an effort by the people of the Austral Islands. It embraces the spirit of the Polynesian practice of rāhui. The people of the Australs have noticed a decrease in resources in their waters and know that more intensive fishing will have significant consequences on their food security. They see the marine reserve as an extension of the existing coastal rāhui farther into the sea. For this reason, they want to name the reserve Rāhui Nui Nō Tuha'a Pae, or "the big rāhui of the Austral Islands." The people of the five inhabited islands took part in 62 public town halls over the past two years, an extensive consultation that included input from more than 500 people. The proposal that emerged would create a 1 million-square-kilometer marine reserve, which would include five areas for sustainable fishing up to 20 nautical miles around each inhabited island. The rest of the Australs' exclusive economic zone would be closed to fishing and other commercial extraction. At that size, this could become the largest marine reserve in the world. The people express pride in this effort, which would preserve coastal fishing, develop ecotourism, and showcase the natural and cultural heritage of the Austral Islands far beyond the borders of the archipelago.

8. Once the reserve is created, who will manage it?

The Austral Islands have proposed that the reserve be managed by a central committee across the archipelago that would deal with broad issues while a committee on each island would deal with local issues. Rapa provides a model with the implementation of its coastal rāhui. The main task in management of a marine reserve will be proper enforcement. Monitoring a large area is not easy, but satellites and radar tools can facilitate this work greatly and make monitoring less expensive. In French Polynesia, the French navy has the authority to monitor the area and already has effective strategies in place. Creating a reserve in the Australs should not lead to additional surveillance costs. Management also will probably involve continued scientific research, local outreach, communications, and promotion of the reserve for ecotourism. These efforts can be developed, if needed, by several stakeholders, depending on available funds. For example, research centers can use the reserve as a reference site to conduct analyses, while tourism providers can use it to promote their activities. Further study is underway to more accurately measure the economic impact of the project.

9. If the marine reserve is established in the Australs, will Pew support its management?

In places where Pew has assisted with the creation of marine reserves, it has provided technical support to help governments manage the new reserves when requested. For example, in Hawaii, Pew recently cofinanced an international conference on the management of large marine reserves 10 years after the creation of the Papahānaumokuākea Marine National Monument. In Australia, Pew is working with stakeholders on implementation of that nation's Coral Sea Park, which was declared in 2012. In Palau, where a large sanctuary was designated in 2015, Pew is helping the government to develop a monitoring and enforcement strategy. Global Ocean Legacy also is collaborating directly with the British government and the Pitcairn Island community on an enforcement plan for a marine reserve there using Project Eyes on the Seas satellite technology. GOL's mission is to contribute to the establishment of an international network of large marine reserves. That includes supporting the management of these reserves to encourage their success.

10. What is Pew's interest in encouraging the creation of large marine reserves around the world?

Pew's main goal in encouraging the creation of large marine reserves is to help protect the health of the ocean and the rich array of life it supports. Science increasingly shows that at least 30 percent of the ocean should be protected for maximum benefit, though only 2 percent is fully protected today. Pew is an independent, nonprofit, and nonpartisan organization. It collaborates with philanthropists and nongovernmental organizations to support efforts to improve people's lives around the world. Global Ocean Legacy is a partnership launched by Pew in 2006 to promote the creation of marine reserves, working directly with local communities, governments, and scientists. Pew is committed to transparency and publishes information on its website related to its work and financial disclosures, in accordance with the laws of the countries in which it operates.