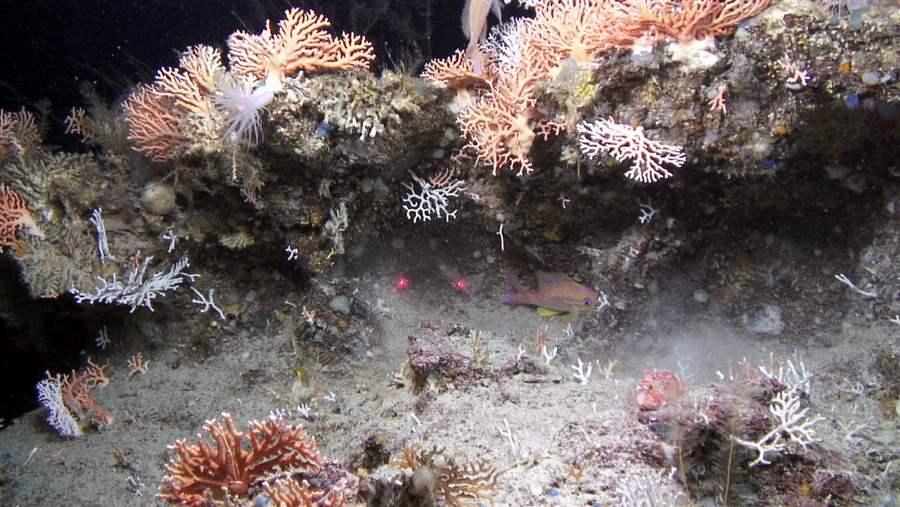 Steep, rocky ledges on the Pourtales Terrace at a depth of 750 feet off the Florida Keys provide habitat for a variety of Stylaster corals, sponges, anemones, and fish.

Once unreachable in the darkest depths, flourishing coral reefs in the Gulf of Mexico are now getting attention as scientists map their locations and unravel the mysteries of these ancient but fragile ocean jewels. The brightly colored corals provide shelter, feeding grounds, and nurseries for diverse, unique marine life, including eels, catsharks, fish, and crustaceans. In the past 13 years, researchers have discovered patchworks of these corals scattered throughout the Gulf on the continental shelf at depths of 165 to 660 feet and on the continental slope from 1,200 to more than 9,000 feet.

But few rules protect such deep-sea corals, which are extremely slow-growing and can take decades or even centuries to recover once damaged. Without safeguards, potential benefits from the deep-sea environment might be lost. 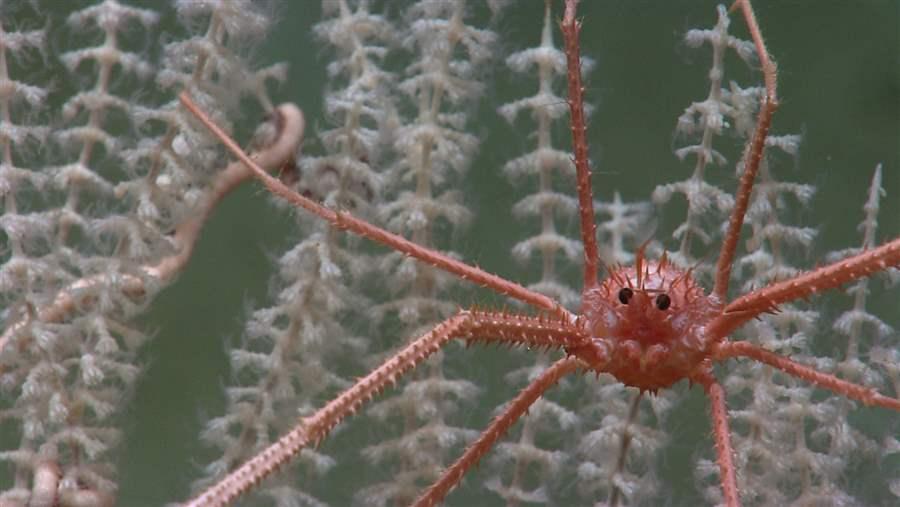 A squat lobster resides on a deep-sea bamboo coral, a species of octocoral.

Scientists think they have discovered only a fraction of the potential value of deep-sea corals. For example, octocorals possess properties that might be useful in treating cancer. The skeletons of black corals contain growth rings similar to trees that provide clues to changes in ocean temperature and water chemistry over time. Bamboo corals may have a use in bone grafting. And several species of deep-sea sponges that share coral habitats contain compounds with anti-inflammatory, anti-viral, and even anti-tumor properties.

Callogorgia, a species of octocoral, is shown at 984 feet in the Green Canyon region south of Louisiana. Brittlestars twist around the coral branches, and Javania cup corals sit around the base.

Corals provide vertical structure from the seafloor in the form of hard reefs such as Lophelia pertusa that can grow hundreds of feet tall or branching forests of treelike gorgonians. Many deep-sea corals are slow-growing, and some can live for thousands of years. 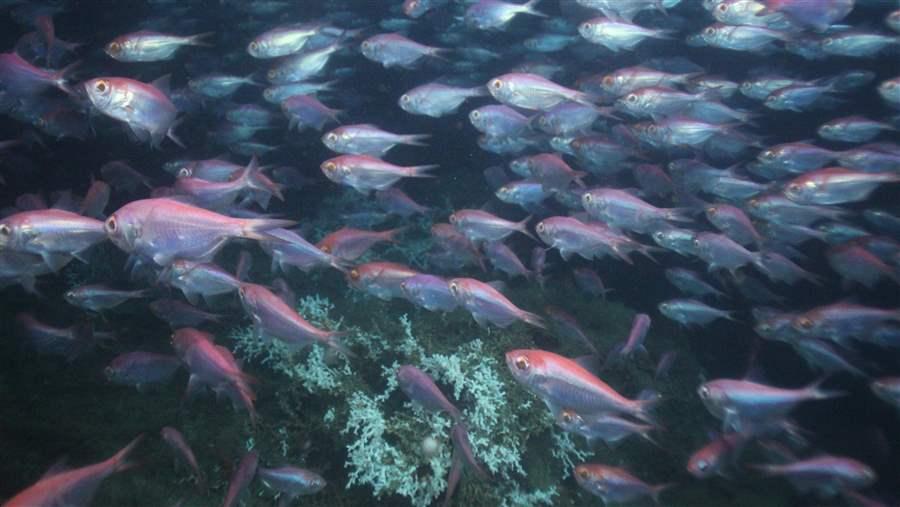 A school of alfonsinos, sometimes called “red bream,” swims among the Lophelia pertusa at Viosca Knoll in the northern Gulf at a depth near 1,640 feet. 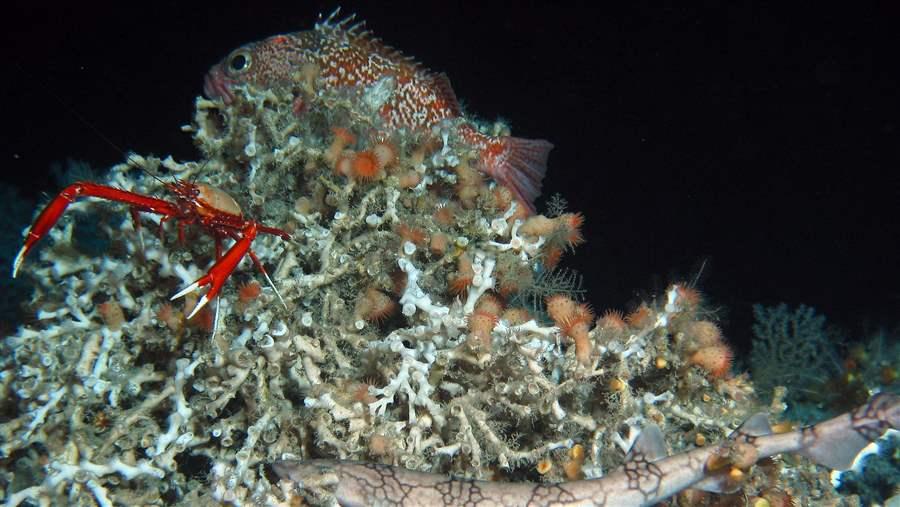 A squat lobster (middle) and a blackbelly rosefish (top) seek shelter with a chain dogfish (bottom) on a Lophelia pertusa reef off the southeastern United States.

Deep-sea corals are scattered throughout the Gulf and clustered in other shelf-edge hotspots, some of which provide habitat for numerous marine animals, including some fish species—such as the blackbelly rosefish—that are not popular now but could become commercial targets. 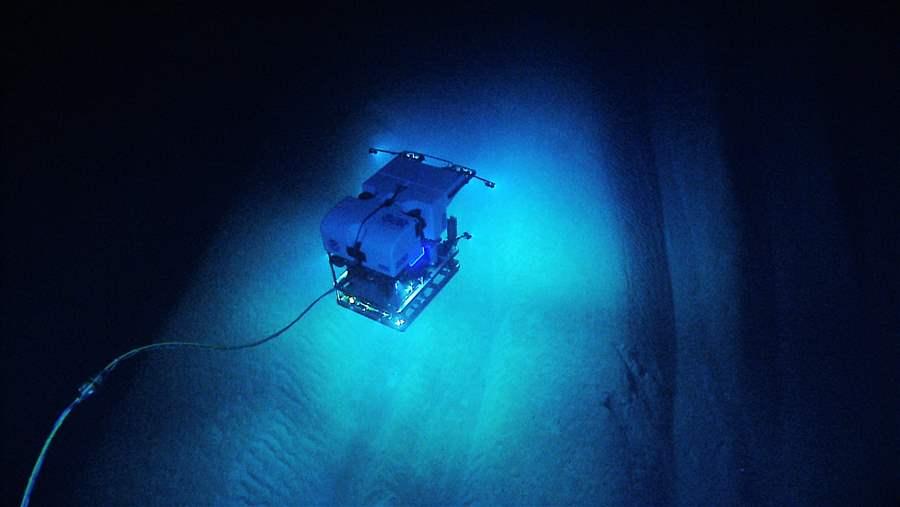 The remotely operated vehicle Deep Discoverer explores the interesting surface features of Bryant Canyon, in the northwestern Gulf of Mexico.

Exploration of deep-sea corals in the Gulf of Mexico is relatively new. The most extensive research began in 2003, and much of it has been funded by the federal Bureau of Ocean Energy Management, which manages the nation's natural gas, oil, and other mineral resources on the Outer Continental Shelf. To examine these complex communities, scientists must use expensive remotely operated vehicles and submersibles launched from research ships. As researchers continue to explore the deep sea, they are likely to discover new coral species and potential benefits. 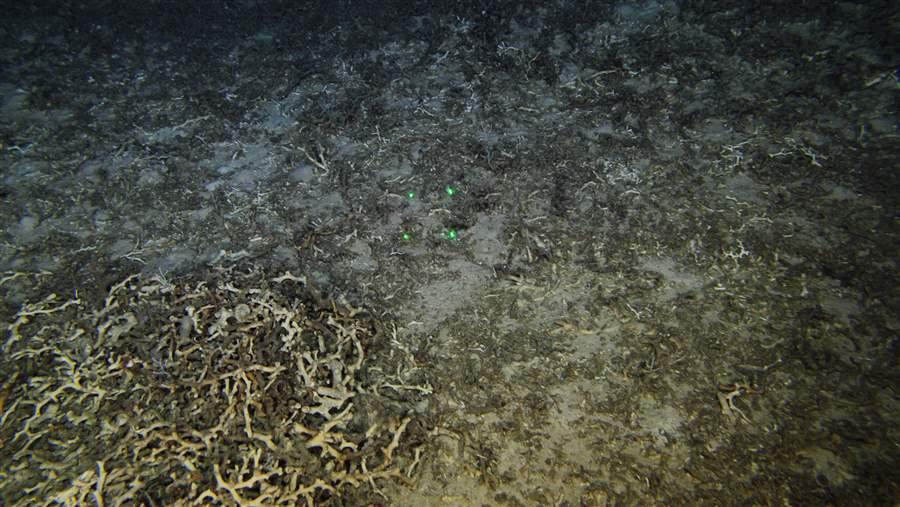 Dead Lophelia pertusa rubble lies at a depth of nearly 1,847 feet on the west Florida shelf at the Okeanos Ridge dive site in the eastern Gulf of Mexico.

Fishing activities such as bottom trawling, which drags large nets across the seafloor, can significantly damage fragile corals. And deep-sea crab traps attached to weighted fishing lines or ropes may break corals or stir suffocating sediments when they are pulled to the surface. Researchers have spotted abandoned fishing gear such as monofilament line, ropes, and anchors wrapped around the Gulf’s reefs and edges, even at great depths. 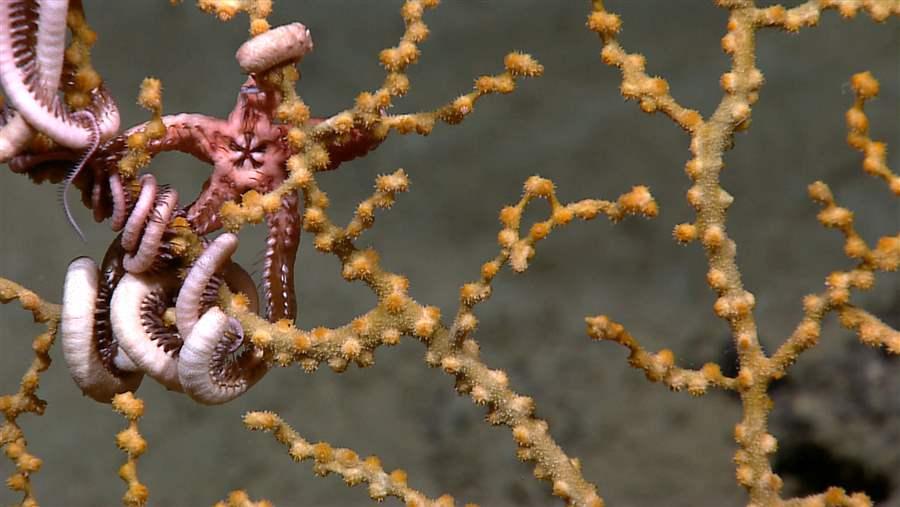 An unhealthy brittlestar wraps its arms around a paramuricid coral with retracted polyps—buds along the branches. The 2012 Okeanos Explorer expedition assessed the impacts of oil and dispersants two years after the Deepwater Horizon spill.

Other threats to corals include oil spills, such as the 2010 Deepwater Horizon disaster. Communications cables dragging on the seafloor and hurricanes can create sediment hazards. Changing ocean chemistry and warming water temperatures could cause long-term harm to coral ecosystems. Maintaining adequate protections in designated coral zones could help prevent some potential damage. 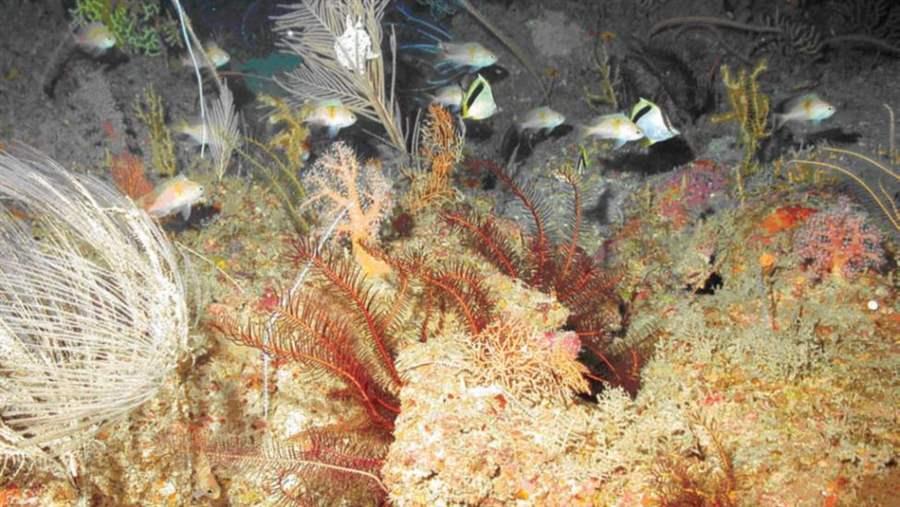 This deep coral habitat at the Flower Garden Banks National Marine Sanctuary, which includes octocorals, black coral, echinoderms, sponges, and deepwater fish, is typical of those found in the northwestern Gulf of Mexico.

The Gulf of Mexico Fishery Management Council and National Oceanic and Atmospheric Administration’s Fisheries Service, which manage fishing in federal waters from the Texas coast to the Florida Keys, have provided limited protections for deep-sea corals in the Gulf. In Habitat Areas of Particular Concern, such as Pulley Ridge off Southwest Florida and the Flower Garden Banks National Marine Sanctuary off Texas, rules restrict harmful fishing activities, including anchoring, and some placement of energy exploration equipment. But these rules cover very few areas. 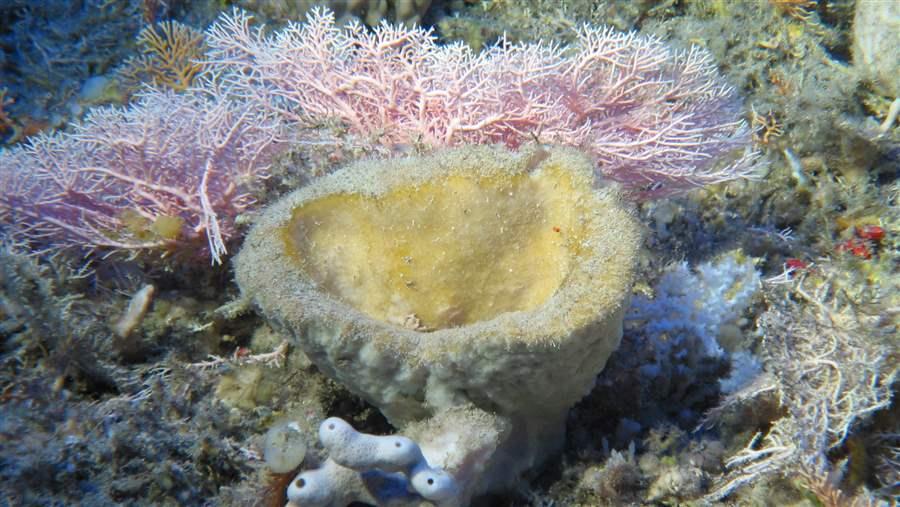 Scientists think they have much more to learn about the distribution and diversity of deep-sea corals in the Gulf. In areas where researchers have identified dense communities of corals, fishery managers are considering expanding the number of sites in which the most harmful fishing gear is excluded.

Want more information or to help protect Gulf corals? Here are ways you can help: