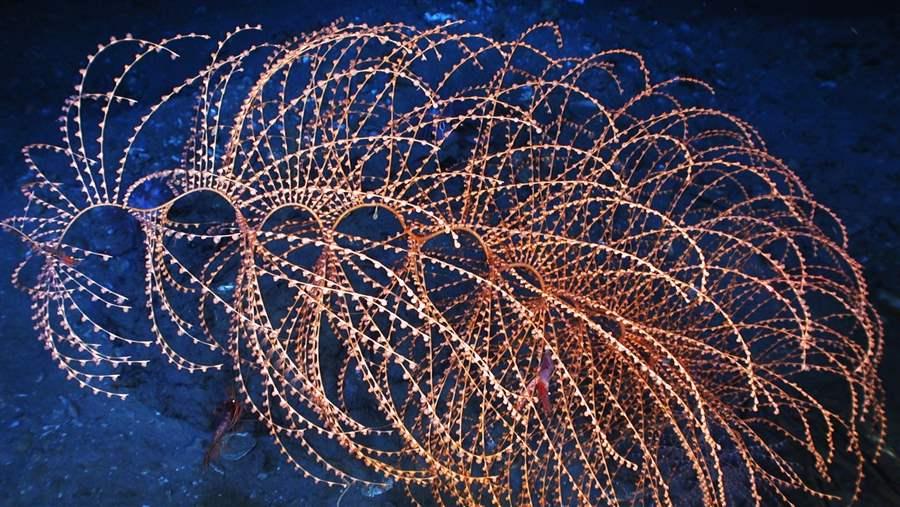 The Gulf of Mexico is home to many kinds of deep-sea corals, including this gorgonian species called Iridogorgia.

They can exist thousands of feet under the sea, grow hundreds of feet tall, and live more than 2,500 years.

Gulf of Mexico deep-sea corals form reefs, mounds, and undersea forests that furnish habitat to starfish, squat-lobsters, crabs, worms, sharks, and fish ranging from eels to groupers and snappers. These fragile and slow-growing corals are not simply deeper-dwelling replicas of the shallow-water varieties familiar to divers and snorkelers.

Deepwater corals thrive in the cold, dark depths. Some species are pure white, and others are a bright rainbow of color. Some branch out wide while others, such as certain types of stony corals, form reefs that can grow straight up for hundreds of feet. 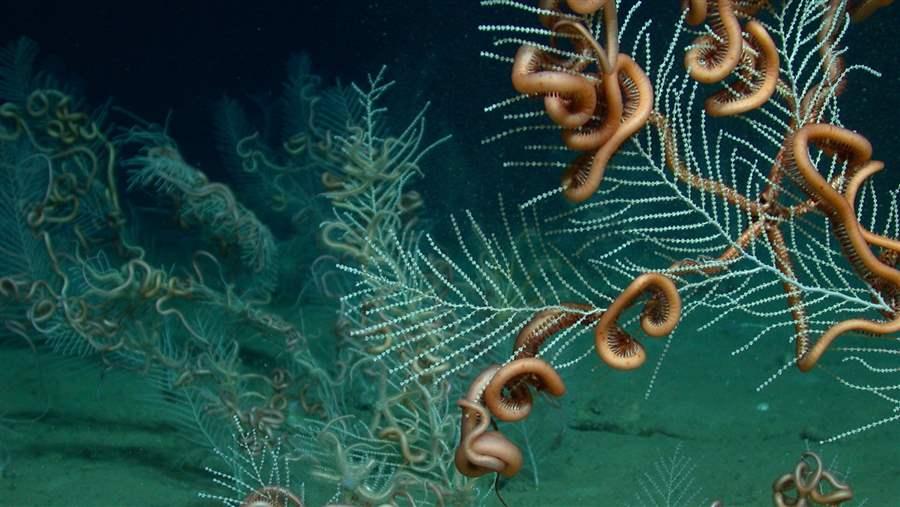 A field of the gorgonian coral species Callogorgia plays host to other sea animals known as ophiuroids, such as brittle stars, in the Gulf of Mexico.

Throughout the world, scientists have spent decades documenting at least 3,300 species of deep-sea corals, including a 4,200-year-old black coral specimen off Hawaii that is the oldest known living marine organism. Since 2000, research on the Gulf’s corals has ramped up. Researchers have discovered corals scattered in dense patches throughout the Gulf, spanning along the edge of the continental shelf at depths of 165 to 660 feet and also on the continental slope from 1,200 to more than 9,000 feet below the surface.

This is difficult and expensive work, requiring remotely operated vehicles or submersibles launched from research ships. As scientists continue to explore deep-coral communities, discoveries of new species are quite possible. 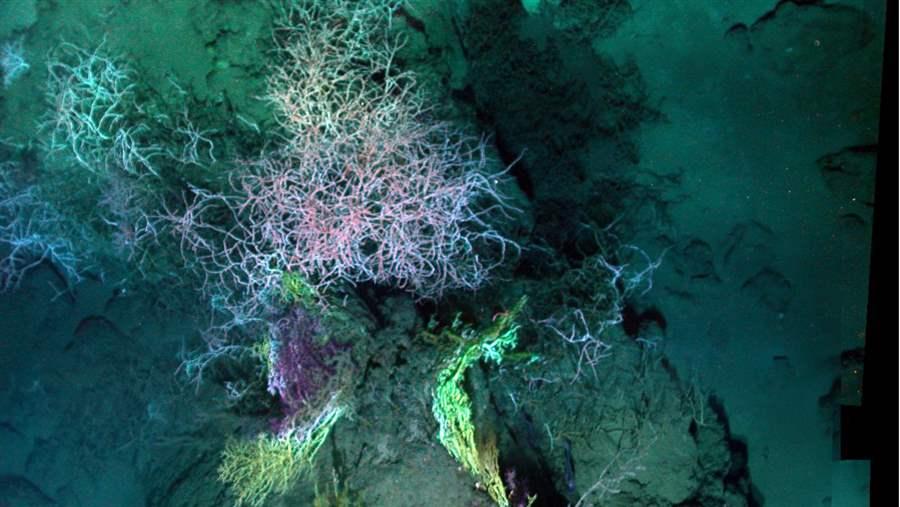 A coral community includes a variety of hard and soft corals more than 4,000 feet deep in the Gulf of Mexico.

Deepwater corals in the Gulf and elsewhere may have a range of beneficial applications in and out of the water, and scientists think they have uncovered only a fraction of those.

For example, octocorals, which are soft and flexible corals such as sea fans, possess properties that might be useful in cancer treatment. Long-living black corals provide clues to changes in ocean temperature and water chemistry through their skeletons, which contain growth rings similar to trees. Bamboo corals may have a use in bone grafting. And several species of sponges, which grow in deep-sea coral ecosystems and also create their own bottom habitat, have been found to contain compounds with anti-inflammatory, anti-viral, and even anti-tumor properties. 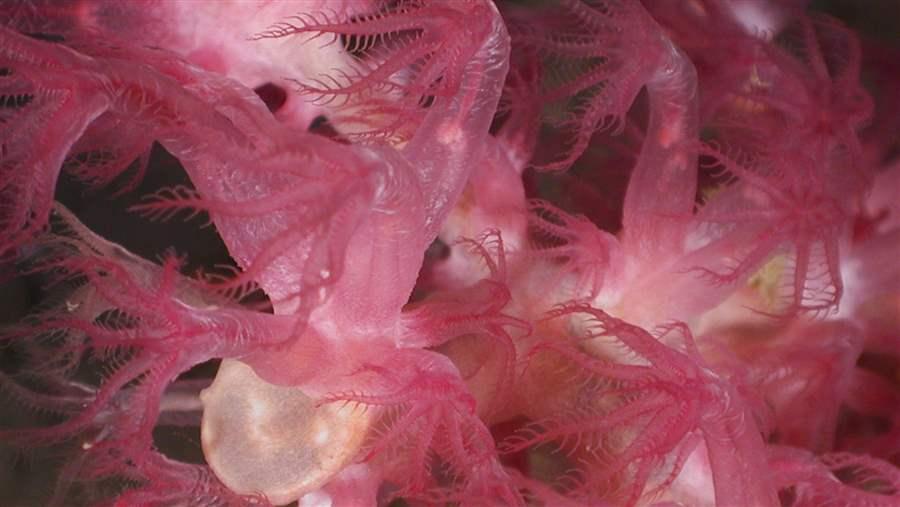 Delicate, soft pink deep-sea octocorals live 4,500 feet below the surface of the Gulf of Mexico.

Yet these corals face many threats and, once damaged, may take centuries or longer to recover. They can be hurt by oil spills, industrial equipment used in oil and gas exploration, and deployment of pipelines or underwater communications cables that get dragged along the seafloor and kick up sediments that can suffocate marine life.

The corals also are susceptible to warming waters and ocean acidification. Boat anchors, crab traps, and some methods of deepwater fishing such as trawling (boats that drag large nets) may break coral or stir sediments that could cover and damage the fragile organisms.

Current policies safeguard only some of these fragile coral hot spots in the Gulf by prohibiting anchoring or the use of certain types of deep fishing gear in these areas. The Pew Charitable Trusts is encouraging the Gulf of Mexico Fishery Management Council, which sets fishing policy in the Gulf’s federal waters, to consider extending similar protections to areas where scientists have identified additional dense communities of corals. 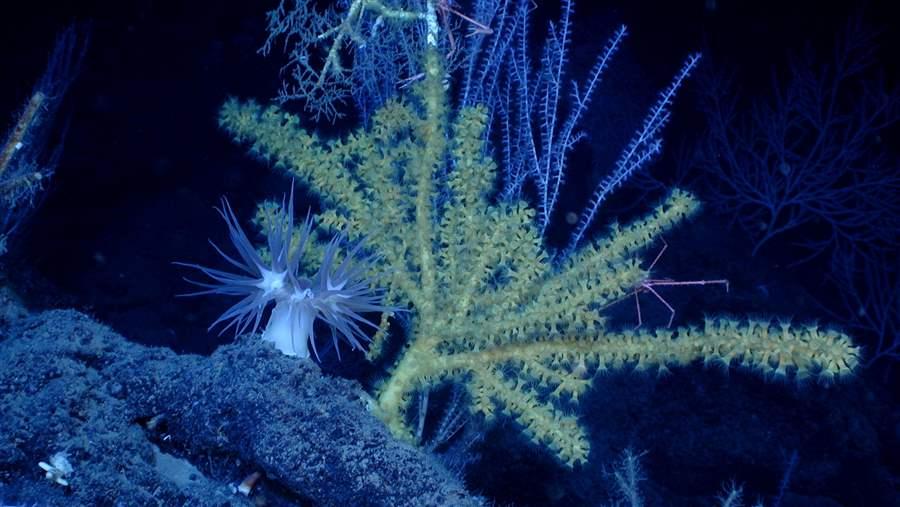 A deep-sea coral community in the Gulf of Mexico contains white sea anemones.

Every species plays a unique role in marine ecosystems, and it is important to recognize this fact when setting fishing policies. As Congress works to renew federal fish law, the Magnuson-Stevens Fishery Conservation and Management Act, it should emphasize the importance of taking a big-picture approach that considers habitat, predator-prey relationships, and other ecological aspects.

Federal fish law is turning 40 years old in April and could use an update. It’s time for a new focus in fisheries management. For more information, visit www.pewtrusts.org/healthyoceans.