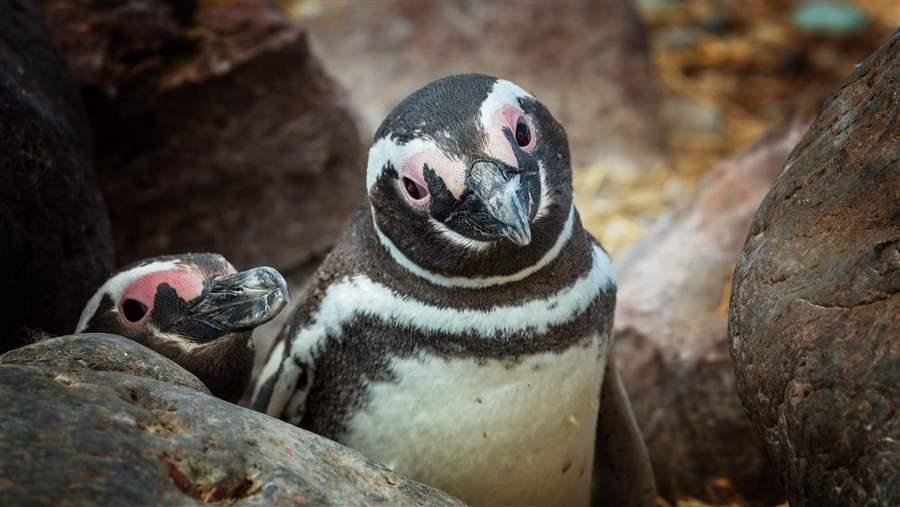 Magellanic penguins’ largest breeding colony in Argentina is declining as a result of man-made pressures, including pollution and fishing.

Dindim, a Patagonian Magellanic penguin, baffled the world with its remarkable survival story. In case you haven’t heard, Dindim washed ashore in 2011, starving and covered in oil, and was nursed back to health by a man in Brazil, Joao Pereira de Souza. Now the bird makes an annual trek of more than 5,000 miles to reunite with its rescuer.

Like many of the world’s 18 penguin species, migrations are not uncommon for Magellanic penguins. After breeding, most travel north, wintering along the coastal areas of northern Argentina, southern Brazil, Chile, and Uruguay.

This heartwarming tale is also a cautionary one. Pereira de Souza saved Dindim, but penguin populations are declining around the world and humans are largely to blame for the biggest threats that penguins face: climate change, oil pollution, habitat loss, and overfishing. Penguins spend most of their lives in the ocean and migrate great distances to nest, breed, and forage for food. As the health of the ocean has declined, penguins’ health has suffered too.

Fortunately, actions can be taken to help safeguard these birds and the waters they call home.

Pew’s global penguin conservation campaign is working to protect penguins by establishing marine reserves in Antarctica through the Commission for the Conservation of Antarctic Marine Living Resources, or CCAMLR. The commission, made up of 24 member countries and the European Union, reaches all of its decisions by consensus.

Responsible ecosystem-based fisheries management takes into account the foraging needs of predator species such as penguins and includes ongoing monitoring of fish stocks and efforts to shift fishing away from areas used for breeding and foraging.

These cooperative actions could not only prevent other penguins from enduring the hardships Dindim did, but they could also improve ocean health for future generations of these iconic species.