Penguins are remarkable creatures. King penguins can hold their breath for 23 minutes and dive over 1,600 feet deep in their search for food. The Magellanic penguin can cover 107 miles in a day and as much as 10,000 miles in a year. The emperor penguin breeds on the Antarctic ice, the egg incubating for up to 55 days on the feet of a fasting male, at temperatures below minus 40 degrees Fahrenheit in winds up to 90 mph.

Because penguins live most of their lives at sea but return to land to breed and molt, they are gauges of marine health that are accessible to researchers and relatively easy to study. Through these ocean sentinels, scientists can learn about the health of marine ecosystems across the Southern Hemisphere and use this knowledge to develop realistic and effective conservation strategies for the world’s southern oceans. 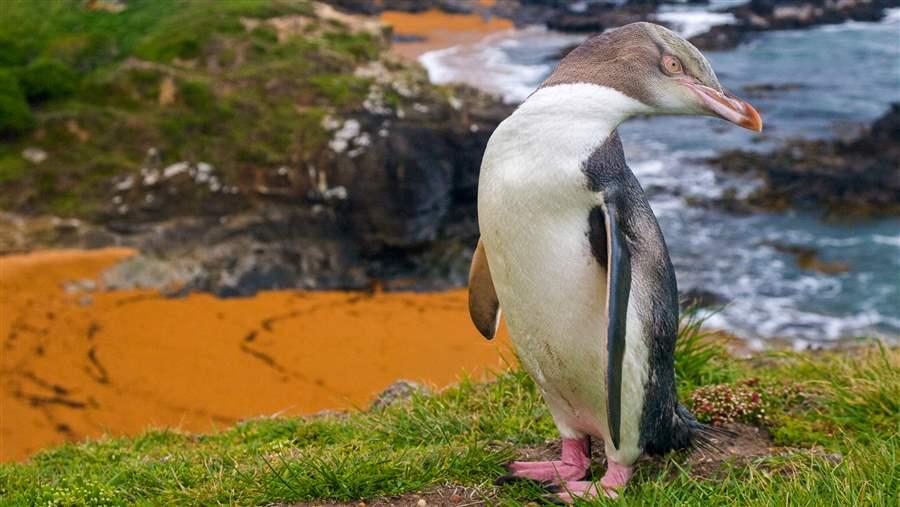 Ferrets and stoats have had detrimental effects on New Zealand’s yellow-eyed penguins.

Penguins can also teach us about the health of coastal lands. Many penguins breed on islands to avoid mammalian predators, including dogs, cats, and rodents, and declines in these penguin populations can indicate when such predators have invaded these habitats. Many penguin species live in deserts or dry locations where chicks rarely encounter rain before their waterproof feathers grow. Chick mortality can signal an increase in the intensity and frequency of storms.

Despite the often isolated locations, penguin tourism is a locally significant economic driver. Each year, upwards of 500,000 people travel from all over the world just to glimpse a group of little blue penguins coming ashore on Phillip Island, Australia. About 120,000 people visit Punta Tombo, Argentina, each year for a stroll through the bustling Magellanic penguin colony, and almost 200,000 tourists journey to the Galápagos Islands for an opportunity to see the only penguin species that lives near the equator.

This report summarizes current scientific understanding of penguin biology and the place of these important seabirds in the global ecosystem. It also offers some general recommendations for safeguarding penguins, including ocean zoning, ecosystem-based management, and habitat protections.

Of the 18 penguin species, 12 are in decline. On the International Union for Conservation of Nature (IUCN) Red List of Threatened Species, only three penguin species are listed as Least Concern; four are listed as Near Threatened, six as Vulnerable, and five as Endangered. Species with the highest level of concern have restricted distributions and small populations and are threatened by humans directly and indirectly through development within their breeding sites, petroleum pollution, overfishing, climate change, and introduction of invasive species, such as rats and cats. All five endangered penguin species live in temperate regions—generally closer to humans than Antarctic penguins are—and therefore experience greater direct threats.

Penguins are Southern Hemisphere seabirds that live in diverse habitats, ranging from the volcanic Galápagos Islands on the equator to the frozen sea ice of Antarctica. They nest in deserts and forests, on rocks, sand, and ice, under bushes and trees, in burrows, or in the open (García-Borboroglu and Boersma 2013).
Within the penguin family, appearance, range, and life history vary widely (Williams 1995, García-Borboroglu and Boersma 2013). Some migrate 2,500 miles in a year, while others remain sedentary. Breeding areas range from Antarctic ice to hot, dusty coastal deserts. All penguins molt once a year, except for the Galápagos penguin, which molts twice a year (Boersma 1978, Boersma et al. 2013b). Penguins are long-lived, with some individuals living more than 30 years in the wild. Many species do not reproduce until ages 3 to 8. Some, like the king penguin, take 18 months to raise a single chick, while others raise two in as little as 60 days.

Raising a penguin chick requires two parents (García-Borboroglu and Boersma 2013). While one parent guards and broods chicks, the other forages at sea for food, which it transports back to the nest in its stomach. Because adult penguins must have a partner to successfully rear their chicks, they are typically faithful throughout the breeding season. Fidelity varies among species, especially between years: One pair of Magellanic penguins bred together for 16 years (Boersma 2008), while 85 percent of emperor penguins find a new partner each breeding season (Wienecke et al. 2013). 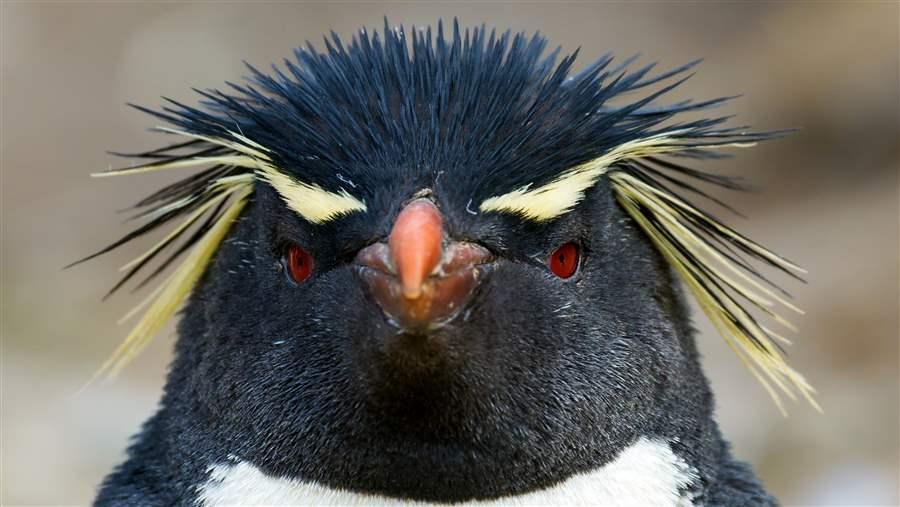 The cumulative effects of habitat degradation, commercial fishing, and oil pollution are thought to contribute to the northern rockhopper decline.

Though penguins breed on land, they forage at sea. Some are inshore feeders, such as yellow-eyed and African penguins, while others, like macaroni and king penguins, feed offshore (Davis and Renner 2003). At sea, penguins are vulnerable to predation by killer whales, sea lions, seals, and sharks. On land, eggs and young chicks are targeted by predatory birds, such as petrels, skuas, sheathbills, and gulls, and by such mammals as rats, skunks, foxes, and cats.

A look at each penguin species, its population size, and the threats it faces, plus its IUCN ranking.

A look at each penguin species, its population size, and the threats it faces, plus its IUCN ranking.