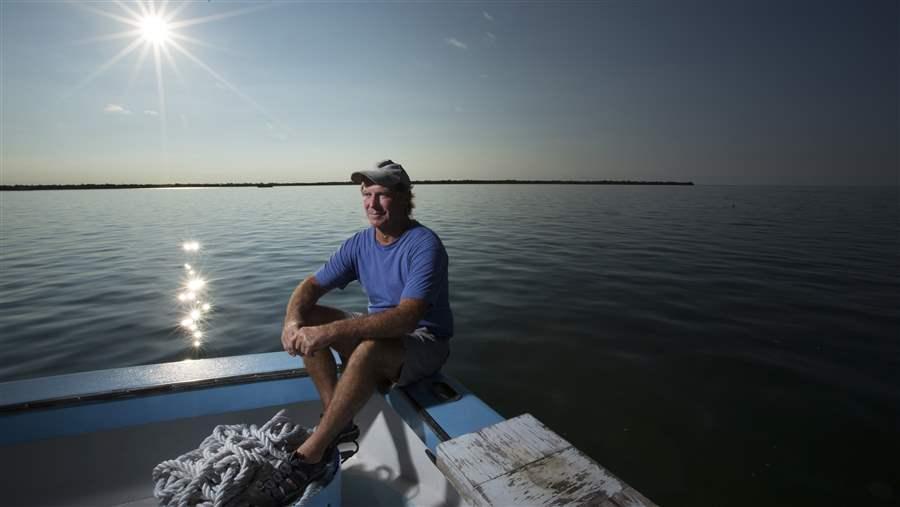 Don DeMaria’s decades as a fisherman have shown him the importance of protecting places where fish breed.

Don DeMaria went up against monster fish and won.

But he didn’t relish the victory of spearing goliath groupers for long. It was the 1970s when DeMaria was catching the behemoths that can weigh up to 800 pounds. He was a young fisherman, there were no rules on how many goliath could be taken from waters off Florida, and few people realized how much the fish’s population would suffer if fishermen targeted the places where it spawned.

“We would find them in groups; we speared them, and eventually saw the population drop off. It just didn’t seem like the right thing to do,” said DeMaria, now 64 and a leading voice in the Southeast fishing community to protect fish spawning sites.

Most recently, the Florida Keys resident was part of an expert panel that recommended fishing restrictions at some key spawning sites, in a stretch of U.S. waters extending from North Carolina to eastern Florida. In March 2016, the South Atlantic Fishery Management Council approved a new plan to allow fishing at the surface in five sites, but prohibit it in deeper waters where snappers and grouper gather to breed. You can read more about the spawning protection plan here.

DeMaria’s realization about protecting spawning fish began with goliath grouper, which fishermen are not allowed to catch and keep in Florida because the species’ population had declined to unsustainably low levels. But his desire to safeguard breeding fish only grew stronger as he traveled the world—from Asia to South Africa to Australia and beyond—for a business collecting invertebrates for study by the National Cancer Institute.

“In many parts of the rest of the world, they have identified spawning sites, protected them, and the fish are recovering,” said DeMaria, who made a living as a commercial grouper fisherman and also by collecting tropical fish for sales to aquarium businesses. “In the United States, we lag way behind. We are still in the process of identifying the sites. There’s a lot that has to be done, but we seem to wait until everything is beaten down before we enact something meaningful.”

Don DeMaria puts his on-the-water experience to work in speaking out for policies that help protect fish spawning sites.

Protecting fish breeding locations is a proven way to boost fish populations. For example, DeMaria participated in efforts to create a marine reserve at the Dry Tortugas in the Florida Keys. After fishing was prohibited, yellowtail and mutton snapper, as well as previously overfished species such as red grouper, increased in abundance and size inside the reserve, and ocean currents are likely transporting fish larvae to other areas throughout the region.

DeMaria hopes that allowing fish sufficient space to reproduce will boost populations well beyond the boundaries of the spawning sites. If successful, he thinks that more abundant fish could enable fishermen to catch species year-round instead of dealing with seasonal closures and some other restrictions needed to help maintain healthy populations. But DeMaria believes that protected spawning sites will work well only if they are large enough and in the right places, and the fishing rules are enforced.

“We cannot set them up so they are doomed to fail,” he said.

DeMaria is convinced that the federal fish law, the Magnuson-Stevens Fishery Conservation and Management Act, can help “hold fishery managers’ feet to the fire” in doing more to protect fish spawning sites. As Congress renews the law, it has the opportunity to strengthen provisions that safeguard fish habitat and encourage fishery managers to take a big-picture look at how they manage marine resources.

Congress can help guide a new and improved approach to guarantee a successful fishing future by renewing this federal fishery law. The Magnuson-Stevens Act is turning 40 and can use an update. It’s time for a new focus in fisheries management. For more information, visit www.pewtrusts.org/healthyoceans.