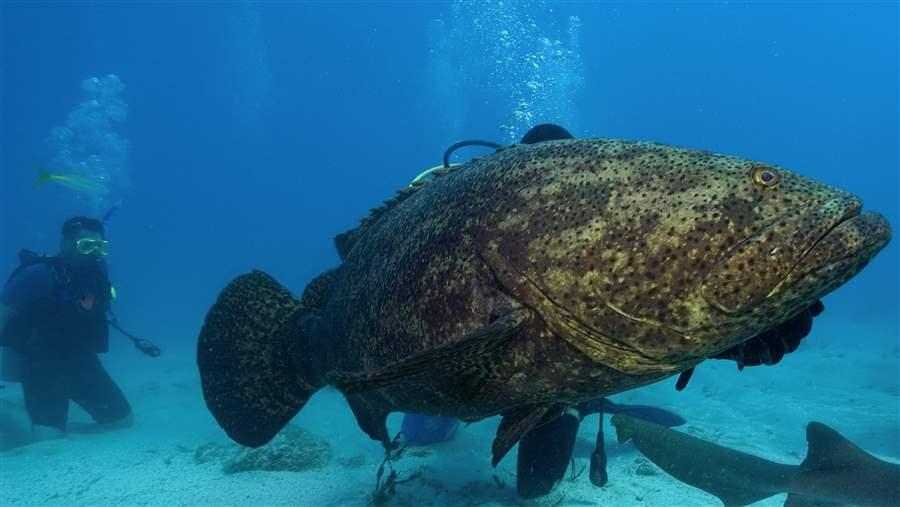 Goliath grouper can weigh as much as 800 pounds and grow up to 8 feet long.

They can weigh up to 800 pounds, swallow a stingray, and aren't shy about snatching fish right out of human hands or off fishing lines.

Goliath grouper were nearly wiped out in Florida by the 1990s due to severe overfishing and habitat loss. A 1990 moratorium stopped anyone from catching and keeping the massive beasts, which can grow up to 8 feet long.

Today, the fish are recovering. Fishermen spot the species more often in a greater number of places throughout Florida. The behemoths even steal prized catches out of the hands of spear fishermen or off fishing lines, evoking the battle between David and Goliath. But these crimes of opportunity aren’t a mainstay for goliath, which eat mostly sand-dwelling crabs and other slow-moving creatures. For people who realize the species’ importance to the ecosystem, forgiveness can come more easily. Goliath grouper use their broomlike tails to clean coral reefs of sediments and excavate nooks and crannies that make excellent homes for many other sea creatures

Right now, fishermen must release goliath grouper unharmed, but with the fish growing more numerous, some people are eager to catch and keep them once again.

To their credit, federal and state regulators are moving cautiously before making any changes to fishing rules for goliath grouper. These fishery leaders—the Florida Fish and Wildlife Conservation Commission and the Gulf of Mexico and South Atlantic fisheries management councils, which oversee fish in federal waters—have recognized the need for more research into the species’ populations and biology to ensure that fishing for goliath won't hurt its recovery.

Some important—and intriguing—questions remain about this territorial fish, which makes booming sounds with its swim bladder during spawning and while trying to scare off predators.

For one, scientists want to find out how long these fish live. Researchers have found that goliath grouper grow slowly and mature late in life. The mostly sedentary groupers spend four to seven years growing up near the shore in shallow mangroves—fast-disappearing habitat—before moving out to deeper-water reefs. But scientists aren’t sure about the species’ life span. They have discovered that the fish can live at least 37 years, but some think the creatures could live much longer than that.

For another, scientists would like more information about the size of the breeding population and the species’ mating habits. Researchers do know that the giants gather in groups to spawn in the same places year after year, making them especially vulnerable to fishermen who have learned these special breeding spots. 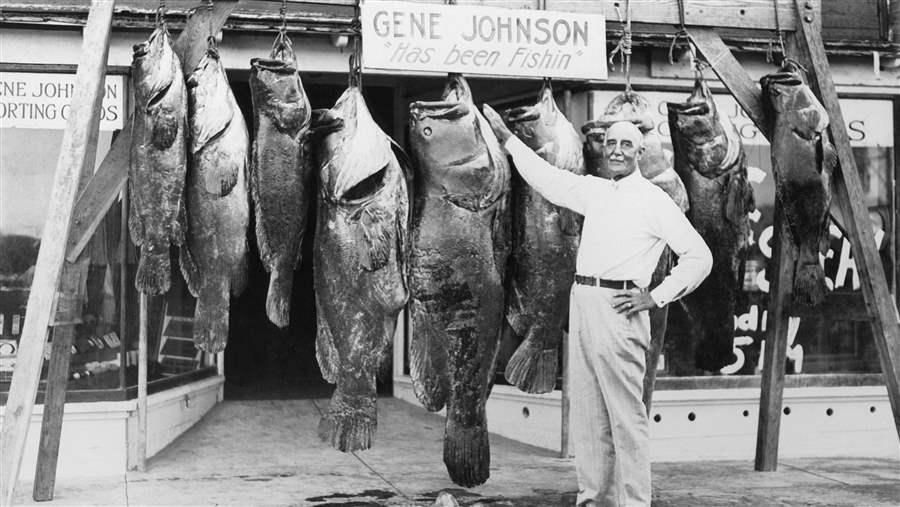 A 1920s photo shows a man standing in front of a sporting goods store with nine goliath grouper. Once plentiful, the species was nearly wiped out by the 1990s because of overfishing and habitat loss.

Scientists also know that some of these animals turn from female to male, but they don't have precise information about how many fish make the transition and at what age or size it occurs. Knowledge of the sex-changing process, known as hermaphroditism, is key for enabling researchers to judge the breeding ability of the population. This information would help regulators design any future fishing rules to protect enough mature breeders.

Fishery managers want these important questions answered before they make any decisions that could affect the future of this admired species. This type of precautionary approach—knowing the impacts of fishing before setting fishing rules—stands as an example of how all fishery management should be done.

Unfortunately, this commonsense approach is not the usual practice in the United States. Too often, new fishing efforts are allowed to start without fishery managers understanding the effects on the species that will be fished (known as the target species). That knowledge gap leaves managers in the position of reacting to unexpected problems rather than trying to prevent them.

The current Congress is considering changes to the nation's primary fish law, the Magnuson-Stevens Fishery Conservation and Management Act. We at Pew contend that the new law should emphasize precautionary management, in which decision-makers allow new fishing only after setting rules that ensure sustainable fishing for present and future generations. It's the smart way to conserve our valuable marine resources.

The Magnuson-Stevens Act is approaching its 40th anniversary and could use an update. It's time for a new focus in fisheries management. Learn more at www.pewtrusts.org/healthyoceans.