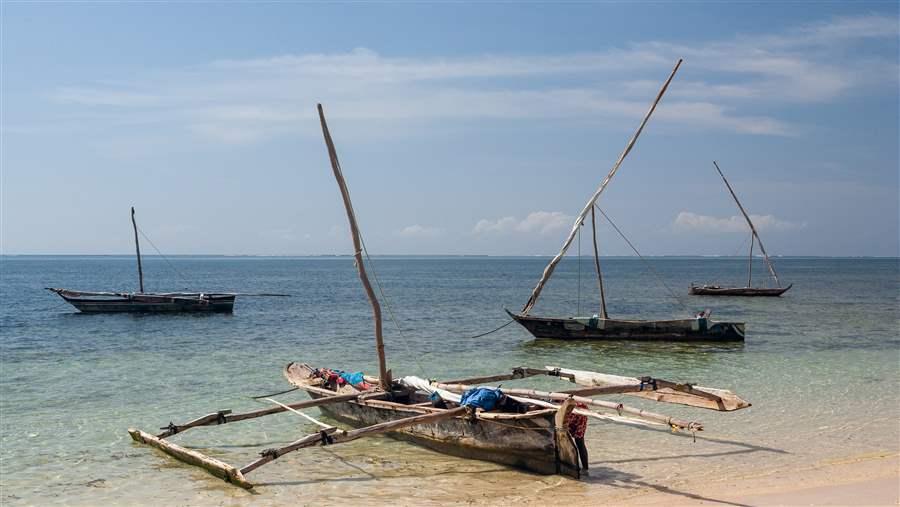 Boats line the shore in Kenyan waters. Kenya is a member of Fish-i Africa, a task force that enables authorities to identify and act against large-scale illegal, unregulated and unreported fishing in the western Indian ocean.

The seven countries that are already part of FISH-i Africa unanimously accepted Somalia’s request to join. Launched in December 2012, the initiative is a unique alliance among African coastal countries, coordinated by the nongovernmental organization Stop Illegal Fishing and supported by The Pew Charitable Trusts. The FISH-i countries are working to construct effective mechanisms to bolster enforcement through the use of vessel data and satellite tracking. They are focused on the benefits of information sharing and close regional cooperation to enable authorities to identify and act against large-scale IUU vessels in the region’s waters.

Somalia made its formal request to join FISH-i Africa in May 2015. The decision to expand the task force membership demonstrates its ambition to broaden efforts to sustain itself beyond Pew’s support, as well as member nations’ strategic understanding of what will be needed to counter illegal fishing operations in their waters.

“We have shown that our countries in the western Indian Ocean are committed to identifying the wrongdoers,” said Wallace Cosgrow, Seychelles’ minister of fisheries and agriculture. “We have developed trust with one another that was not there before, and this pooling of information and resources means we can outmaneuver the illegal operators.”

After years of instability in Somalia, the government has decided to improve its fisheries management system and act against illicit fishing operations in national waters. This comes at a fitting time as the drop in piracy has resulted in an increase in fishing activity, both legal and illegal.

At a meeting in Zanzibar in late 2015, Comoros, Kenya, Madagascar, Mauritius, Mozambique, Seychelles, and Tanzania confirmed the importance of integrating Somalia into the FISH-i Task Force. They recognized the critical role that Somalia must play, in part because of its strategic location, in efforts to effectively fight illegal fishing and fisheries crime in the western Indian Ocean.

“By encouraging exchange of information and coordinated action, the FISH-i Africa countries have made a significant difference to the effectiveness of monitoring, control, and surveillance efforts in the region,” said Nicholas Ntheketha of Kenya, the acting chair of the FISH-i Africa Task Force. “The addition of Somalia strengthens our network even further.”

The nations made the decision to accept Somalia into the coalition with an acknowledgement that the new member is still at the beginning stages of developing its structure and resources for monitoring, control, surveillance, and enforcement.

Challenges remain in setting up effective systems of information sharing and cooperation, but Somalia’s inclusion will open a practical dialogue among task force members. And that discussion should help FISH-i reduce fisheries crimes, including IUU fishing, in Somali waters, as well as lessen the detrimental effects they have on the region. The decision to bring Somalia into the alliance demonstrates the understanding that no multinational effort to end illegal fishing in the western Indian Ocean could ignore the importance of Somalia’s cooperation in getting the job done.