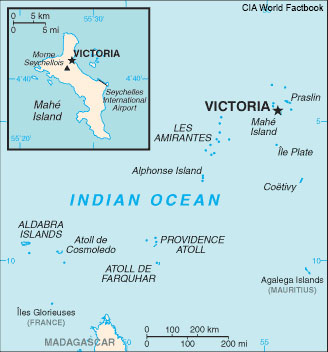 The government of the Seychelles has formally ratified a key international treaty to keep illegally caught fish from entering the market. It is the first African state to do so.

The United Nations Food and Agriculture Organization adopted the Port State Measures Agreement, or PSMA, in 2009. When it goes into effect, the pact will require countries that have ratified it to deny landing and services to vessels that have been involved in illegal, unreported and unregulated fishing.

The Pew Charitable Trusts has supported this treaty since its inception and is urging countries to ratify it so that it can enter into force in 2014.

Despite its small landmass, the Seychelles occupies a strategic position in the fight against illegal fishing. Made up of a group of islands, the state's national waters cover 1.3 million square kilometers (497,548 square miles). Its Port Victoria is one of only four commercial ports in the tuna-rich Western Indian Ocean where vessels can land their catch.

The Seychelles is potentially a major player in combatting illegal fishing. Its government is a partner in FISH-i Africa, a regional collaboration among seven southeast African countries to share resources, information, and best practices to curb unlawful fishing. Since it was launched in December 2012, FISH-i Africa has produced several successes and yielded enforcement actions against illegal fishing and related activity.

The Seychelles is the seventh government to ratify the PSMA, following Chile, the European Union, Myanmar (formerly Burma), Norway, Sri Lanka, and Uruguay. To take effect, 18 more countries must ratify the agreement.

Tony Long, who leads Pew's global project to end illegal fishing, welcomes the Seychelles' action. “We know that the Seychelles is committed to the fight against illegal fishing, as shown by its work as a FISH-i Africa partner,” says Long. “By ratifying the PSMA, this vital port in the Indian Ocean has just sent a very clear message that it is resolutely closed to illegal fishers.”