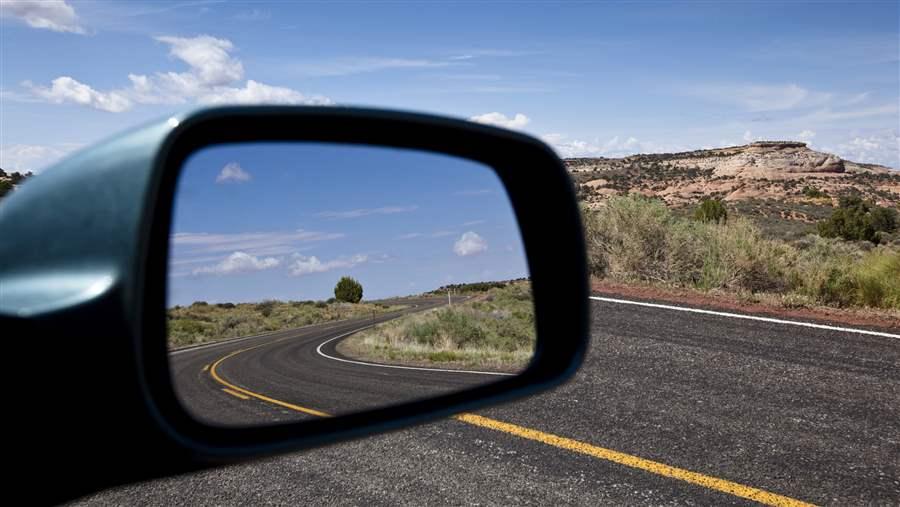 A Pew report published in August 2015 analyzed the experiences of 11 jurisdictions—California, Colorado, Connecticut, Illinois, Maryland, Nevada, New Mexico, Utah, Vermont, and Washington, plus the District of Columbia—that issue alternative driver’s licenses to unauthorized immigrants.1 Deciding Who Drives explored how these jurisdictions designed and implemented their laws and the major decisions they made.

When developing legislation for alternative driver’s licenses, states often estimate the number of licenses they expect to issue. Seven states and the District implemented their laws in the past two years, and this update examines the number of alternative licenses they have issued through Sept. 30, 2015 (see Table 1); the factors that may influence those numbers; and the degree to which they may differ from initial projections.2

Seven states and the District of Columbia Issued More Than 900,000 Driver's Licenses to Unauthorized Immigrants

†This includes limited-purpose driver’s licenses and permits. The District of Columbia Department of Motor Vehicles does not track permits separately.

Factors that influence numbers of applicants and licenses issued

As of Sept. 30, 2015, seven states and the District of Columbia had issued licenses to unauthorized immigrants for less than two years, with two—California and Connecticut—having done so for just nine months. Therefore it is too soon to draw definitive conclusions about the number of licenses that have been issued or the accuracy of any state’s initial estimates. Pew has identified five factors that can affect the numbers, and in some cases the pace, of license issuances: learning permit requirements, appointment availability, eligibility requirements, fraud, and public outreach and education. Even when these are accounted for, unanticipated factors could also affect how many licenses are issued. These dynamics can, in turn, affect the cost of implementation and administration of the program and the revenue generated by the licenses.

Learning permit requirements. States may require certain unlicensed individuals to obtain permits before applying for driver’s licenses—an additional step that lengthens the timetable for obtaining an alternative license. For example, as of Oct. 6, 2015, Connecticut reported that 8,985 alternative learning permits were active in the state, and as of Sept. 30, 2015, Maryland reported that 25,009 such permits were active.3 These permits presumably will be replaced by alternative licenses after the required period of time, increasing the total number of licenses issued.

Eligibility requirements. Applicants may not be able to obtain licenses because they cannot meet the eligibility requirements, present the necessary documents, or pass the knowledge or driving tests. Colorado reported that as of Sept. 30, 2015, 21 percent of customers who had appointments did not receive an alternative license, permit, or identification document, probably because they could not complete the process.4 Potential applicants also may decide not to initiate the process if they believe they cannot meet all of the requirements. As a result, the numbers of applicants and licenses issued may be lower than anticipated.

Fraud. States have implemented policies to detect applicants who have used fraudulent documents to obtain licenses in the past. Those identified through this process may be deemed ineligible for licenses by the state or, if they remain eligible, may have to pay a fine or wait for a period of time before applying again. This may mean that some individuals receive their licenses later than initially expected. For example, in Illinois, individuals who previously held fraudulent licenses are required to schedule an interview with the Secretary of State Police to establish their identities and merge their driving records. The meeting is followed by a 12-month suspension, after which the individual can pay a reinstatement fee and apply for a temporary visitor driver’s license.5

Fraudulent applications can artificially inflate the number of applicants in a state. Advertisements in several out-of-state newspapers encouraged applicants to pay large fees to unscrupulous individuals to obtain Vermont driver’s privilege cards using fraudulent state residency documents.6 As a result, an unknown number of alternative licenses issued by the state may have erroneously gone to nonresidents, according to the state’s Department of Motor Vehicles. Vermont has since instituted weekly tests to identify irregular addresses.7

Public outreach and education. Public outreach and education efforts may influence the number of people who apply for and receive alternative licenses. Reaching out to immigrant communities in linguistically and culturally appropriate ways helps to make the target population aware of the availability of alternative licenses. When conducting outreach, states may also address questions about how applicant information will be stored and whether it will be shared with other state or federal agencies, such as those responsible for immigration enforcement—a possibility that could affect whether unauthorized individuals choose to apply. Outreach and public education may also help to ensure that potential applicants are aware of the eligibility requirements, have the necessary documentation when they arrive at the issuing agency, and are prepared for the exams. A lack of outreach and education may result in fewer people applying or licenses issued than initially estimated.

Other unanticipated factors. Even if a state makes good estimates and prepares for all the factors that may affect the number of applications and licenses, it may still experience unanticipated events. In Vermont, for example, the number of driver’s privilege cards issued as of Oct. 18, 2015—more than 53,000—far exceeded the initial estimate of 1,500. An official at the Department of Motor Vehicles offered several explanations. First, the driver's privilege card is “available to anyone that is a Vermont Resident and a U.S. Citizen, U.S. National or Permanent Resident Alien or, an Undocumented Immigrant in the United States.”8 An unknown number of U.S. citizens and legal immigrants may have decided to receive the alternative driver’s license even though they are eligible for a standard license. According to the Vermont Department of Motor Vehicles, some applicants who were issued privilege cards may initially have sought regular licenses but lacked the documentation needed to receive them.9

Estimating the number of applicants

A state’s estimate of expected applicants is generally completed during the legislative process, but states may choose to update their estimates based on decisions made during the legislative and implementation stages. Previous research found wide variation in how states make these estimates, much of which may be attributed to a failure to account for the factors discussed above or for the effect of implementation decisions. Figure 2 illustrates a possible path for estimating the number of licenses a state can expect to issue.

States generally begin with estimates of their total unauthorized immigrant populations,10 but they then need to account for the factors discussed above. Although these calculations may be difficult, estimating the number of applicants is critical to planning for implementation and may help determine upfront and ongoing costs, anticipated revenue, and staffing and technological needs. 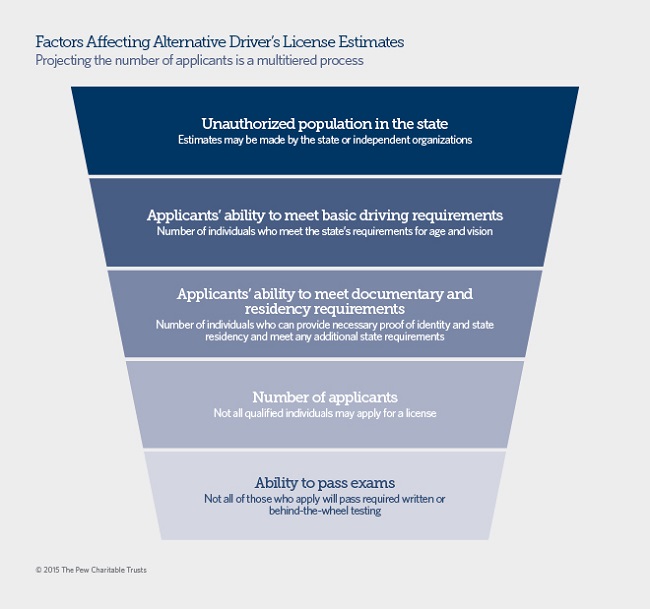 As of Sept. 30, 2015, seven states and the District of Columbia had issued more than 900,000 alternative driver’s licenses since beginning the process within the previous two years. Several factors—including learning permit requirements, appointment availability, eligibility requirements, fraud, and public outreach and education efforts—may influence the number of licenses issued. States can account for these dynamics in their estimates of licenses to be issued and can monitor the number of applications and licenses to determine which factors may be responsible when the figures vary widely from initial estimates.

New legislation in Delaware and Hawaii

During the 2015 legislative session, Delaware and Hawaii passed laws permitting unauthorized immigrants to apply for driver&rsquo;s licenses, and the governors signed the bills into law on June 30, 2015. The states are expected to begin issuing licenses at the end of 2015 and in early 2016, respectively.