Pacific bluefin tuna caught a break in 2014, but recent steps to prevent further population declines may not be enough. Although fishing nations agreed to measures that cut the bluefin catch this year, new research indicates that this majestic fish needs more help.

Scientists monitor the growth of a population by tracking the number of fish born each year, which is known as “recruitment.” The number of young Pacific bluefin tuna added last year dropped significantly from previous years, according to an analysis by Japan’s National Research Institute of Far Seas Fisheries, and that’s bad news for the species’ recovery.

The data come from two fisheries in Japan. In the waters south of the country, catch rates suggest that the Pacific bluefin tuna population produced fewer young fish in 2014 than at any time since 2008. And in the Sea of Japan, the number of new “recruits” was 77 percent lower than just one year earlier. 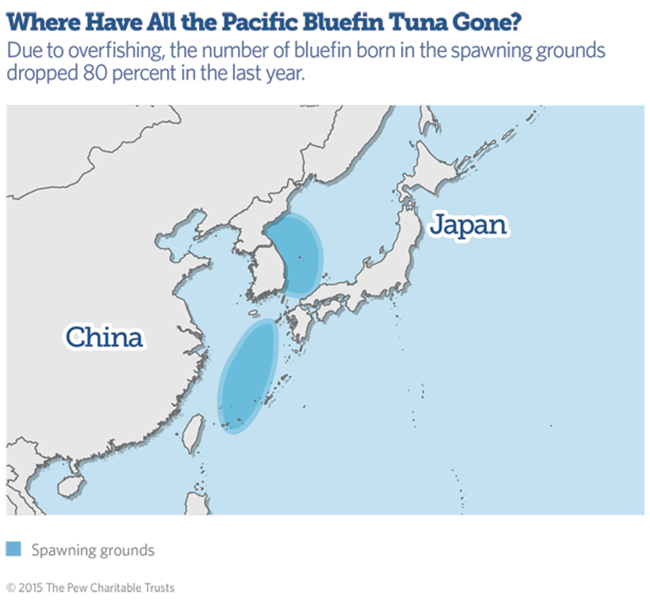 According to the most recent stock assessment, 97.6 percent of all Pacific bluefin tuna caught are still juveniles—2 years old or younger. This high catch of young fish, combined with a possible recruitment collapse, means that the chance of seeing even a slight rebuilding of the population by the 2024 deadline agreed to last year by the Western and Central Pacific Fisheries Commission is becoming less likely.

Pacific bluefin, critical to the marine ecosystem, are severely depleted. Today, the population stands at just 4 percent of unfished levels.

Owing to the new recruitment numbers, it is increasingly obvious that further emergency adjustments, beyond the agreed upon cut in catch, are needed. For starters, there should be an immediate reduction in the catch of adult fish in the western Pacific Ocean to protect these breeding fish. That would lead to an increased supply of young fish in future years. Catch limits on juveniles in 2016 and beyond should be reduced to allow more of these fish to reach maturity and help build the population. Finally, the new recruitment data should be taken into account as scientists undertake a new stock assessment next year.

By taking these steps, Pacific bluefin may still receive another chance. But if fishery managers fail to adequately address the plight of this important fish, it may be time to consider stronger actions that take the future of the species out of their hands and into the realm of more conservation-minded international bodies.