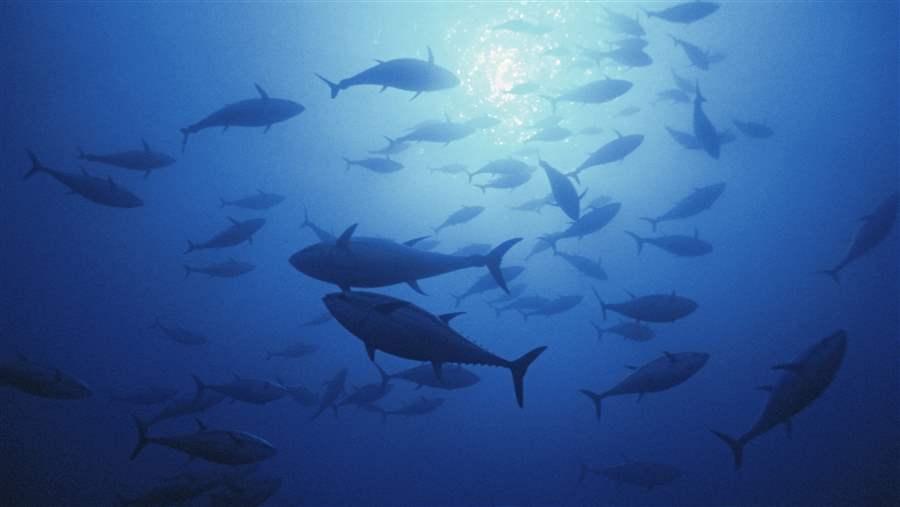 Last January, the new year started for Pacific bluefin tuna in its usual fashion—with a ceremonial auction of the year’s first catch at Tokyo’s Tsukiji Market. The winning bidder paid US$70,000 for that first fish, well above market value but a fraction of the US$1.7 million that the same person paid for the first bluefin of 2013.

Still, with that much money paid for a single fish, the Pacific bluefin kicked off a year that would bring a flurry of attention from fisheries managers, conservationists, the media, and the public. With the Pacific bluefin population down to only 4 percent of what is was before fishing began, time is fast running out to address the continued unsustainable fishing of this majestic species.

The year brought a series of management decisions in Japan, California, and Samoa that advanced conservation of the severely depleted Pacific bluefin tuna. For the first time, policymakers set concrete catch limits on both sides of the Pacific Ocean that may allow this iconic fish to start on a path to recovery.

Policymakers at the Western and Central Pacific Fisheries Commission annual meeting in Samoa agreed to cut catch limits for young Pacific bluefin tuna by 50 percent and to cap the catch of adults. That action followed recommendations from their own Northern Committee, which had met earlier in the year in Fukuoka, Japan.

In the eastern Pacific, international and U.S. fisheries managers acknowledged the significant impact that both commercial and recreational fisheries have on Pacific bluefin populations. Members of the Inter-American Tropical Tuna Commission, meeting in San Diego, adopted regulations that should reduce the commercial catch by 40 percent in 2015. Meanwhile, the U.S. Pacific Fishery Management Council, meeting in Costa Mesa, California, put in place a measure predicted to cut the recreational catch of Pacific bluefin by U.S. fishermen by 30 percent.

While these new limits demonstrate an increased commitment to conservation from nations that fish for bluefin, the long-term health of the population is not guaranteed. Countries in the eastern Pacific could not agree on a rebuilding target or timeline. In the western Pacific, the agreed-to rebuilding plan would still leave the population critically depleted a decade from now, in 2025. Without a harmonized, oceanwide plan that includes ambitious rebuilding targets and timelines, Pacific bluefin remain in danger of further depletion.

Highlighting the urgency, the International Union for Conservation of Nature assessed Pacific bluefin late in the year as vulnerable to extinction and added it to the group’s Red List of Endangered Species. In response, policymakers should quickly adopt strong measures to prevent this tuna from becoming officially endangered, a classification that would undoubtedly affect the fishing industry far more significantly than did earlier efforts to rebuild the stock.

In addition, new findings from the National Research Institute of Far Seas Fisheries in Japan show that the number of fish born in 2014 was dramatically lower than in recent years, a troubling sign that makes rebuilding even more difficult.

There is still much work to do. Scientists predict that current rebuilding efforts in the western Pacific will lead to an increase in bluefin tuna abundance of only a few percentage points, compared to the species’ historic highs. While any growth in the population is good news, even a doubling in numbers of a severely depleted species leaves only a slightly less severely depleted species.

As another annual ceremonial bluefin auction approaches, countries should commit to taking the needed actions in 2015 to build on the initial steps taken in 2014.

If positive trends continue, 2014 could be remembered as the year that things began to turn around for this magnificent fish. But that will happen only with strong commitments from, and cooperation among, all stakeholders across the Pacific. As countries ring in the new year, they should work to make 2015 the year of the Pacific bluefin.