ABOARD THE RESEARCH VESSEL BRAVEHEART—We are getting close to our first sampling site in the waters of French Polynesia but have not yet seen land. 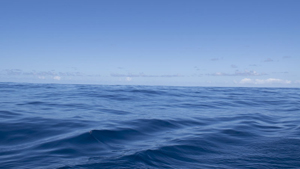 The wide blue ocean that has surrounded us for days.

The team is getting excited now that our research work will start soon. We are getting our gear organized for our arrival at Nielsen Reef, part of French Polynesia’s Austral archipelago. With the blue ocean all around me, it is hard not to think about the marine life carried by the superhighway of ocean currents beneath our vessel. Before we left New Zealand, I spoke with Tom Trnski, an Auckland War Memorial Museum scientist, about marine life similarities among islands in the South Pacific and how we will explore those connections on this expedition.

We talked about the “mystery” of the Kermadec (or Easter) damselfish (Chrysiptera rapanui), which lives in the waters of New Zealand’s Kermadec Islands. Trnski highlighted the “rapanui” part of the fish’s scientific name, as well as the alternative common names. 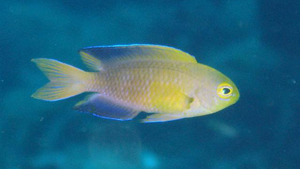 Rapa Nui is the indigenous name for Easter Island, a special territory of Chile in the eastern Pacific Ocean, about 4,100 miles (6,600 kilometers) from the Kermadecs. The Pew Charitable Trusts’ Global Ocean Legacy project is working with local communities and stakeholders in both places to establish large, highly protected marine reserves.

This species of damselfish is considered native to Easter Island but is also found in the waters off the Kermadecs much farther west in the Pacific.  This fish appears to live on both sides of the ocean, but not, as far as scientists know, in the waters of the islands in between. How would that be? 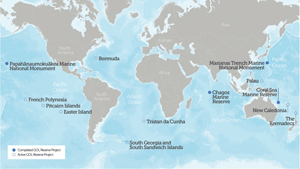 The answer could be tied simply to the limited research sampling done to date. But if further study shows that this fish does not live in waters between Rapa Nui and the Kermadecs, then the larger question remains.

Our research could provide new information. It would be exciting to find the Kermadec damselfish living in southern French Polynesia, far from the Kermadecs or Easter Island. I will be keeping an eye out for this little fish while we collect samples in the days ahead.