ABOARD THE RESEARCH VESSEL BRAVEHEART—Rumors had been flying about the possibility of a swim in the middle of the southern Pacific Ocean. Then the call came from some of my fellow travelers: “We’re going swimming if you want to come." 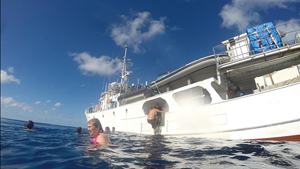 There was a rush to get ourselves sorted out and into bathing suits.  Then the engines stopped and people were launching themselves into the water.

What an incredible feeling to be swimming in water nearly 5,000 meters (about 3 miles) deep.  We were in the middle of nowhere, at least three days from land on our journey from New Zealand to the southern islands of French Polynesia. The water was the most amazing color, deep blue with exceptional clarity.

The dip in the ocean also gave us the chance to collect our first samples of the trip. Pieces of pumice, the largest about the size of your hand, floated past us during our swim.  We gathered some of these bits of volcanic rock and, to our amazement, found life on them: small crabs, barnacles, worm tubes, and such. We were able to identify the crabs as the species Planes major. We preserved the samples to take home for further study. 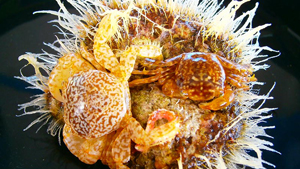 Crabs on a piece of pumice.

Our discoveries led to crew discussions about why pumice was floating out here in the middle of the ocean.  Some speculated that these pieces could be remnants from the large pumice raft that formed following the submarine volcanic eruption of Havre seamount on the Kermadec Arc in 2012.

We cannot tell the origin of these porous rocks but it would be incredible if they did come from this seamount. Just the possibility that the pumice could be floating nearly 3,200 kilometers (1,990 miles) from its origins demonstrates the scale of the currents at play in the South Pacific Ocean.