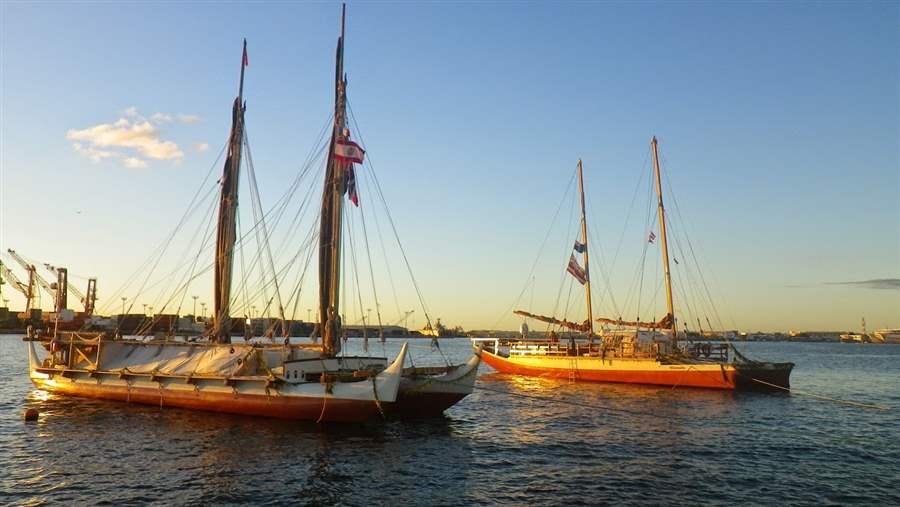 The traditional canoes Hokule’a and Hikianalia at anchor in the harbor of Papeete, French Polynesia.

Aboard the Research Vessel Braveheart—We have been in open ocean since our departure from Tauranga Harbour in New Zealand. Our course is set for French Polynesia, and we do not expect to see land again for several days. Surrounded by this great ocean, I am reminded of the journeys of others across the Pacific Ocean.

Hundreds of years ago, European explorers were amazed to reach remote islands and find people living there—people who had no knowledge of the compass and who did not use or understand European methods of navigation.

Capt. James Cook, who explored these waters in the 1700s, visited many South Pacific islands, including New Zealand. He noticed linguistic similarities and deduced that there were connections among these peoples. Conversing with Tahitians, Cook asked about their navigation methods and discovered that Polynesian peoples were well versed in navigation and able to give him directions to reach different far-off islands.

Today we know a great deal more than Cook did about Polynesian voyaging and its legacy of cultural and linguistic connections across the Pacific.

The modern expansion of our knowledge about Polynesian voyaging began in Hawaii in the early 1970s with the launch of the Polynesian Voyaging Society. Its leaders sought to replicate the voyaging of ancient Polynesians by navigating a traditional vessel between Hawaii, French Polynesia, Rapa Nui (Easter Island), and Aotearoa (New Zealand).

In 1973, they tested their newly built version of a traditional double-hulled sailing canoe, the Hokule’a. Its successful round-trip maiden voyage from Hawaii to French Polynesia showed it was possible to navigate accurately using only the sun, the moon, and the stars.

In 1985, the Hokule’a arrived at Bay of Islands of Aotearoa. That visit inspired the building of another traditional ship, the Te Aurere. In 2012, the Te Aurere and a second waka, or traditional canoe, called Ngahiraka Mai Tawhiti, traveled from New Zealand to Rapa Nui.

Like our expedition, that voyage focused on the strong oceanic and cultural ties among New Zealand’s Kermadec region, French Polynesia, and Rapa Nui. These are connected and special ocean spaces that we at The Pew Charitable Trusts are working to protect in partnership with local peoples and governments.

Earlier this year, the Polynesian Voyaging Society embarked on a three-year worldwide voyage called Malama Honua, or “to care for our Earth.”

On the first leg, the crew traveled from Hawaii to French Polynesia. Its welcome in Tahiti was warm, and its message was embraced by Friends of Hokule’a of Tahiti.

I look forward to following in the wake of Hokule’a to explore the waters of French Polynesia and expand our knowledge and understanding of marine connections across the Pacific.